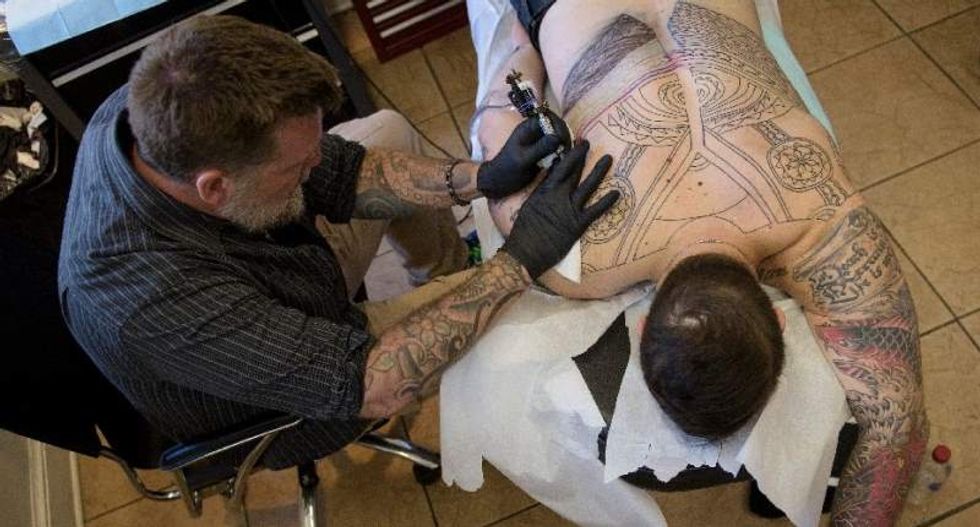 Butch Johnson, owner of Champion Tattoo Company, works on a former US Marine at his art studio in Washington, DC, on April 18, 2016. (AFP Photo/Brendan Smialowski)

An indelible blue drawing of an ornate birdcage, festooned with roses and petals, wraps its way around Navy Corpsman Jessica Bryant's forearm.

The 23-year-old sailor's tattoo is large, but not big enough to be considered a "sleeve," the type of design that covers an entire arm.

Bryant hopes to remedy that, thanks to new Navy rules kicking in April 30 -- aimed at attracting recruits among young millennials who have adopted tattoos en masse.

"When they make this really, really legal, I am going to finish the rest of it," she said during a recent visit to the Champion Tattoo Company in southeast Washington, across the road from a Marine barracks.

Until now, sleeve tattoos have been barred under military regulations. The Navy is scrapping the ban -- and going further still -- to adopt the most lenient rules on body art of any US military service.

From next month, sailors will also be allowed a tattoo on their neck -- up to one-inch across -- and restrictions will be lifted on ink below the knee or elbow, including on the hands.

Additionally, sailors with visible tattoos will be allowed to work as Navy recruiters, a gig that was off-limits to them before.

"Everyone's really thrilled," said Navy Corpsman Everette Abney, 28, as he perused tattoo designs to add to the colorful selection already on his forearm.

News of the rule change was up on "Facebook for maybe an hour, and it had been shared about 40,000 times," Abney said.

His friend, Navy Corpsman Taylor Hoyte, 20, is getting a tattoo of a pair of interlocking hands as part of a design that will eventually be a sleeve.

"I want to keep going until I run out of room, from the neck down," she said.

Tattoos are a longstanding tradition among sailors the world over -- think Popeye and his anchor -- reaching back to the 18th century.

But in recent decades, as the military sought for troops to project a more uniform and professional image, even the Navy restricted what kind of tattoo sailors can wear.

With the practice more popular than ever among millennials and hipsters, the Navy's latest easing of the policy is aimed at reaching a wider array of potential sailors. According to a Harris poll, nearly half (47 percent) of Americans born in the 1980s and 1990s have at least one tattoo.

"This policy has increased the pool of candidates we recruit from. Will we get new recruits that wouldn't have previously applied to the Navy? I think absolutely, yes," Navy spokesman Lieutenant Commander Nate Christensen said in a phone interview.

"The Navy strives to reflect the nation we serve, to attract, recruit and retain the nation's best talent," he added.

Military tattoo restrictions have long stoked ire among rank-and-file troops. Many grumble that if they can die for their country, they should be able to express themselves on their skin.

"Today's military needs to understand... that letting service members have tattoos with less restrictions adds to their own esprit de corps. It boosts morale. It allows them to tap into an ancient warrior spirit," said Butch Johnson, owner of the popular Washington tattoo parlor, which is located next to a hip eatery.

"It is the one personal item that can be taken into a battlefield and give a service member that extra edge, a feeling of power, a reminder of family, patriotism, pride -- and a tattoo can't be taken away."

Johnson says Marine Corps restrictions on tattoo sleeves -- when they were implemented locally in 2012 -- had hurt his bottom line.

The bearded artist traced his buzzing tattoo gun over the skin of Tyler McManus, 24, a former Marine who says he wasn't allowed to re-enlist in part because of his extensive tattoos.

"A lot of people that had tattoos were 'volun-told' to get out," said McManus, who is getting a huge Polynesian tribal design inked across his back.

The popular military phrase: "Si vis pacem, para bellum" -- If you want peace, prepare for war -- stretches across his chest.

Since leaving the Marines in 2014, he has had a full sleeve depicting a carp and a dragon in Japanese style etched onto his left arm.

Now he is considering enlisting with the Navy because of the service's new rules.

"With the lax tattoo policy and the way that I read it, I would be much more obliged to go back into the Navy to serve with them," McManus said.