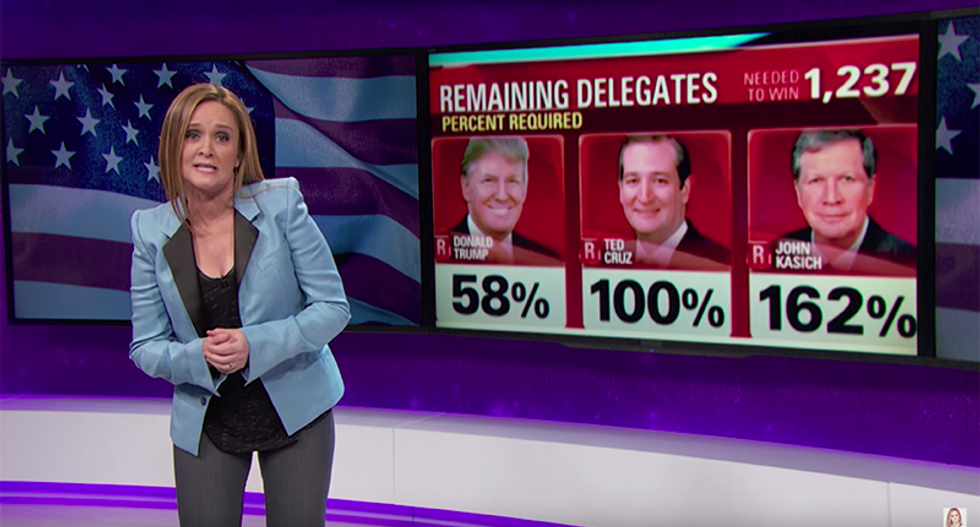 It is mathematically impossible for Gov. John Kasich and Sen. Ted Cruz to win in the first ballot of voting at the GOP convention in July. Where they are winning, according to Samantha Bee's "Full Frontal," is in the state of denial.

In Kasich's town hall with MSNBC's Chris Matthews, Kasich said that he's looking at what President Abraham Lincoln did at the GOP convention when he came from behind and ultimately became the nominee. The problem is that Lincoln was in second place and Kasich is in fourth. "Yes, you're in fourth place! Out of three! Behind the ghost of Marco Rubio," Bee said on Monday night's show.

According to CNN, Kasich would have to win 162 percent of the remaining states left to be the nominee. "What's your plan? Wait until the Republican party has slaughtered itself, then mosey onto the battlefield and suck the marrow from the delegates' bones for strength?" Bee asked.

But when it came to the math lesson, it was Ted Cruz who explained in an interview that Kasich has no shot mathematically. Although, when it came time for Cruz to face the same reality, suddenly "Ted remembered that modern math was invented by the Greeks, who also invented homosexuality. And we should just pray them both away," Bee said.

Cruz even asked a rally audience to come out and vote for him ten times, a request that is not only impossible — it's also voter fraud. "No! Think bigger, Ted!" Bee suggested. "You need a political bombshell!"

But now, they've formed an alliance like some kind of homoerotic cartoon to defeat Donald Trump. That said, "Cruz needs Kasich the way an octopus needs an ice-unicycle," Bee joked.

Bee explained that she doesn't mean to diss the cartoonish idea of two sworn enemies coming together to defeat a big, hairy, orange villain. "But a vicious, three-way floor fight may detract from the gravitas of the Republican convention." It's traditionally a more dignified affair, "graced by such luminaries as an Iditarod banshee," meaning Sarah Palin. "And a 'Silver Alert' ranting at a chair."

Perhaps that is the reason that so many high profile Republicans have suddenly discovered that they're super busy that week and can't make it to the convention. While the Republican elected officials are busy washing their hair that week, the good news is that there are no longer three jamokes that are viable. There's really just one candidate left, Donald Trump. In a style only Trump can master, he wanted to reassure the political establishment that he's going to shift to being more rational and "presidential." In fact, he swears he'll be so presidential that people are going to get bored. It's cute he thinks that hasn't already happened with the American electorate.

"But how do you walk back months of racism, xenophobia, misogyny, calls to violence and disinterest to anything even remotely to the business of governing?" Bee wondered. Basically, by being all "sike!" In an interview on the Today Show, Trump explained that he was saying some of these things in jest and as an entertainer. "Oh! So, all the horrible things he said in character as an entertainer don't count! Kind of like all those murders I committed in character dressed as a clown don't count!" The problem with this logic is that those negative qualities are what his supporters like most. So, good luck with that.

In the end, the explanation is "the Republican convention is going to be party elites calling the base gullible rubes. While, trying to Romnify their racist messiah, so he can also lose the general election," Bee said. Now that's some real entertainment.