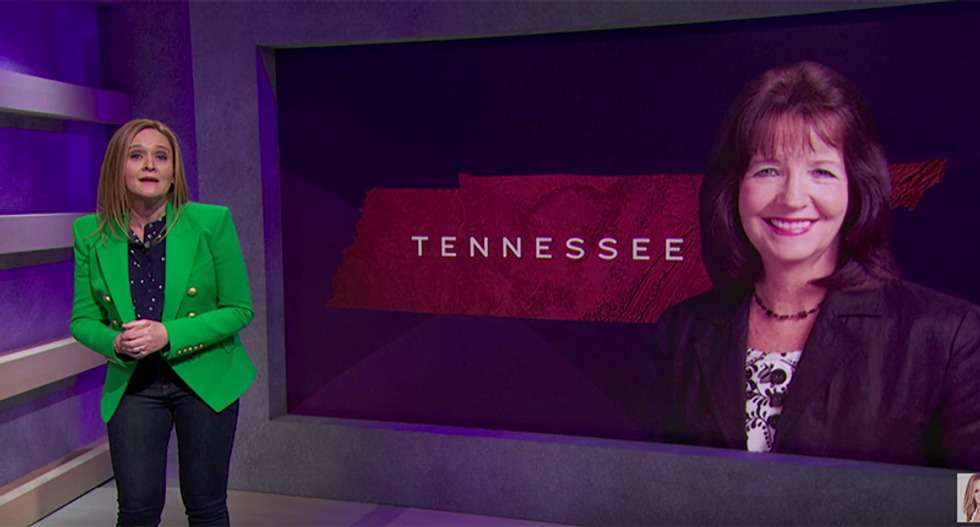 There are some pretty despicable lawmakers in Tennessee, but according to comedian Samantha Bee on "Full Frontal" on Monday, the worst is Republican state Rep. Sheila Butt — who lives up to her namesake.

Butt refused to exempt victims of rape and incest of the 48-hour waiting period before an abortion because she claims that the rape is not "verifiable." "Right, those crimes are totally unverifiable," Bee began sarcastically before destroying Butt's logic. "So we should go with the likeliest assumption that girls are lying whores that just like the prestige of claiming to be raped by their fathers? It's called Occam's Razor, libtards!"

It turns out Butt also might be a racist. She tweeted "It's time for a Council on Christian Relations and an NAAWP in this Country."

NAAWP, if you didn't know, stands for the National Association for the Advancement of White People — not to be confused with the Republican Party. Though Bee says it could very easily also stand for the National Association for the Advancement of Walrus Penises and we should "tell your friends that Shelia Butt just looooooves walrus penises. I mean, she does seem to think about sex a lot. In her Christian dating guide Everyday Princess, Daughter of The King, Butt comes down on a 3-year-old who married her two female Barbies, telling her, 'Girls don't marry girls. God made girls to marry boys!'"

That's when Bee took the mockery of Butt to a whole new level. "Look, Sheila, if you don't believe in homosexuality, you should never have supported a toy line that includes Ken. That guy is young, dumb and hungry for c*m."

Evidently Butt's "helpful" book compares a non-virginal woman to a "used stained dress that no one would ever want," according to Bee. "So, girls, next time you're tempted to have dirty sinful sex, resist the urge. Instead, do all the stuff Sheila Butt suggests, or as she may call it, 'Butt Stuff.' This Tennessee state representative wants you to do lots and lots of Butt stuff. Do Butt stuff until it hurts!"

Bee also makes a plea to viewers to "do some research on your state legislators before you vote for them," and encouraged people to visit SamanthaBee.com which links to US Elections as a means of looking up information.