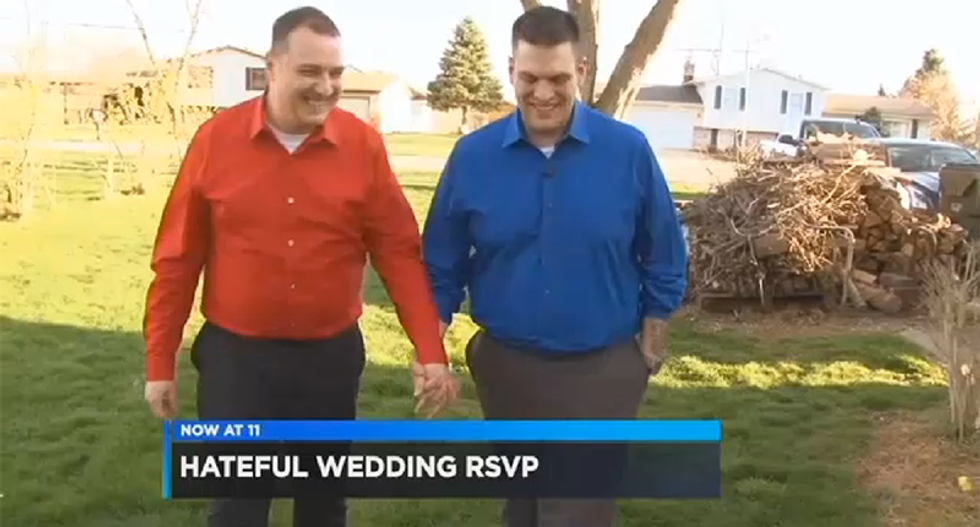 When Keith and Chad of Canton, Ohio went to their mailbox they expected well wishes from family and friends for their upcoming wedding, instead they got homophobic mail.

It seems when the gentlemen sent out their wedding invitations they either got an address wrong or never knew the hate and homophobia held by someone they thought was a friend. Rather than throwing the invitation in the trash, the family that received the letter sent a revolting homophobic response instead, according to WISTV

"You have sent an invitation to the wrong people," the letter the newlyweds to be received. "It's not normal for 2 men to marry. What is wrong with you, it's a sin!!!!" It's typed and the lack of a signature illuminates the cowardice of the sender. The letter also threatens that the recipients forwarded the wedding invitation onto a right-wing hate group that would be attending the wedding instead to protest the men's nuptials.

The couple have been together for nine years and have enjoyed planning their wedding since the Supreme Court legalized same-sex marriage in all 50 United States. They say that the threat hasn't scared them off, though, they're more empowered than ever.

"It's something we waited a long time for, we honestly never thought we'd be able to do it," Chad said.

"This letter we received yesterday is more of a reason to move forward with it. Love will win in the end, that's what it comes down to," Chad said.

They're moving through the guest list to isolate the responses and discover who sent them the evil note and will be responsible for the protest. But what the two have received from their friends, family and surrounding community took a different turn. When they posted the note on Facebook people offered to help but it was the New Vision UCC church that has done the most.

The church calls themselves an "open and affirming congregation of the United Church of Christ" a denomination that has always been friendly to LGBT people. They offered to host a "card shower" where supporters from all over the world can send love and letters to the church which will ensure the men get the positive notes and are protected from hate mail in the month before the wedding. You can contact them at the address below:

Check out the video for the full story: