Seth Meyers imagines Trump's VP options: The opposite of Trump is a Mexican guy with giant hands 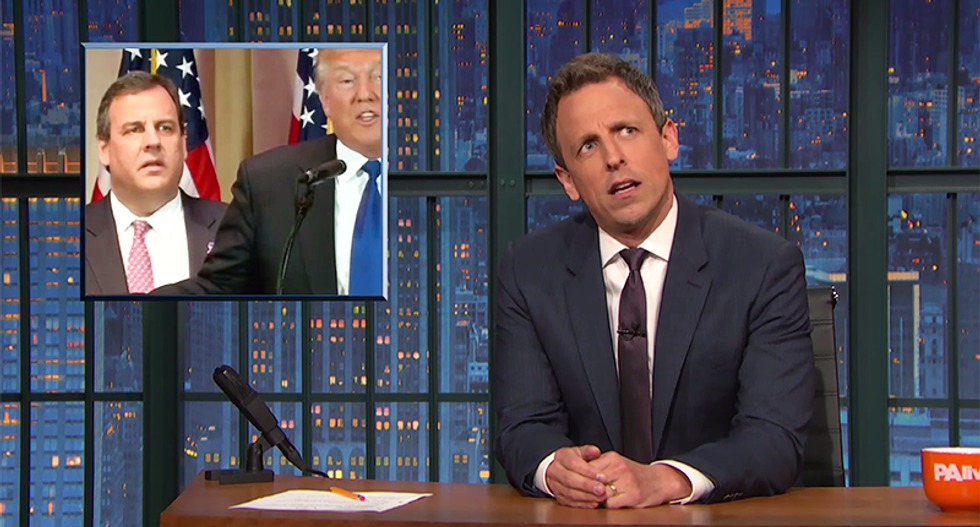 If Seth Meyers hears the word "Veepstakes" one more time, he's going to lose it. The closer we get to the end of the primary season, the more the cable news shows can revel in the squalor that is the conjecture of the general election. Which means it's ripe for late-night mockery.

"If 'Veepstakes' made you roll your eyes a little, you're not alone," Meyers said showing a clip of Hillary Clinton looking like she wanted to punch a reporter. "Arrggggh, f*ck off," Meyers said imagining what was going on inside the Clinton cranium. "In Hillary's defense, it's not like her VP pick is really going to matter because I get the sense she's gonna be doing everything. 'Madam President, it's not really your job to shovel the White House driveway,'" he said, pretending to be a staffer. "'I'm gonna need you to get out of my way and bring me some salt,'" he speculated Clinton would respond.

According to the New York Times, Clinton cares less about personality in her vice presidential running mate and more about the ability to win. Meyers says that it's like she's choosing the candidate Emilio Estevez-style in "The Breakfast Club." He then ran the clip of Estevez ranting about how his parents always want him to win."You got to be number one! I won't tolerate any losers in this family!"

It isn't just frontrunners Clinton and Donald Trump, even candidates that have absolutely zero chance of being the GOP nominee. Gov. Kasich (R-OH) told Fox News that he was looking into some names because he doesn't want to get to his "win" and pull a name out of a hat John McCain-style. "John Kasich picking a running mate is like Vin Diesel practicing his Oscars acceptance speech," Meyers mocked.

Meyers explains that there are several ways to go about picking a VP. "There's the 'pick an opposite technique.'" Where a candidate would choose someone so unlike him or herself it helps garner a different constituency. "Like old man John McCain selecting young woman Sarah Palin. Young black man Barack Obama selected old white man Joe Biden. And the most famous example, Vice President George W. Bush selecting President Dick Cheney."

With that logic, Trump would have some interesting options for his opposite. "Who or what is the opposite of Donald Trump? Is it a Mexican guy who tears down walls with his giant hands? Oh, wait, no, Trump's opposite would be a homeless guy married to an older, ugly woman."

Another option for Trump is to go with some of the GOP presidential losers. The problem there is that all of them have said "no," "hell no," or quite simply laughed it off as a joke. To be fair, one can't really say they're okay with second place. If you do "you come off as desperate and the next thing you know you're standing in the back of a press conference wondering where it all went wrong." That's right, we're looking at you, Chris Christie.

Picking the second place person is always an option but Meyers can't imagine Clinton picking rival Sen. Bernie Sanders (I-VT). "He's already pretty grumpy. The two of them together would be like one of those couples you hate to see boarding your plane," Meyers said. "Like he's already telling her she's overpacked. She's telling him to keep his voice down and you're thinking, 'Not in my row. Please, not in my row.'"

Some folks are pushing Clinton to choose progressive hero Sen. Elizabeth Warren (D-MA) but "is it feasible to have a woman as president and vice president in the same country that lost their collective minds when they heard about the all-female 'Ghostbusters?' I mean, you could never have two people of the same gender in the White House except for the last 44 times."

But Meyers is in it for the Clinton/Warren ticket. "If you've ever seen either of them at a Congressional hearing, you know they ain't afraid of no ghosts."