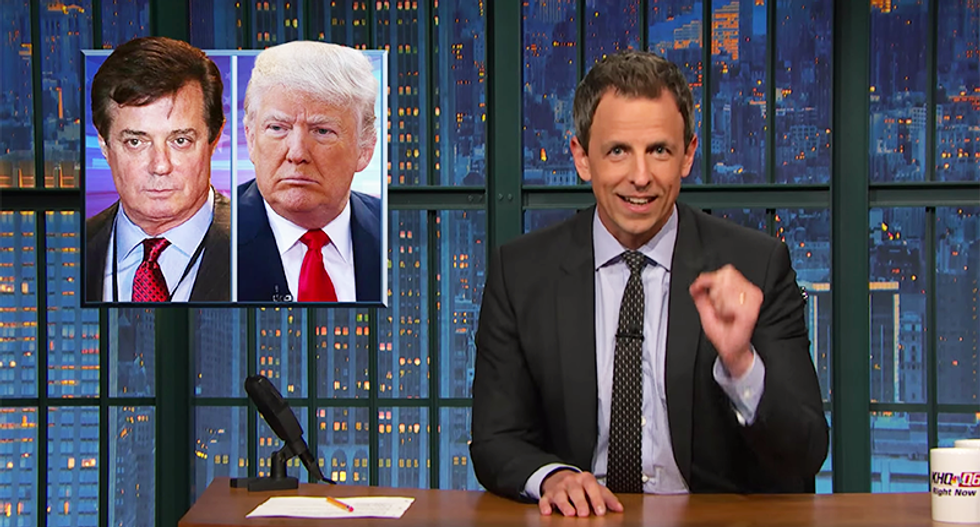 Seth Meyers calls out Trump on his BS (Screen capture)

You really can't reinvent yourself when you've spent your political career being a racist, xenophobic misogynist with unfavorability ratings closing in on 70 percent. But that's exactly what Donald Trump is trying to do, and "Late Night" host Seth Meyers is having none of it.

"Donald Trump has all but admitted that the Trump we've seen so far is just an act," Meyers began his "Closer Look" segment.

Meyers began his epic line-by-line take down of Trump with his biggest talking point that Trump is self-funding his campaign and not beholden to Washington lobbyists.

The truth is, "after a few weeks on the campaign trail, Trump turned to one to run his campaign: A lobbyist and GOP political operative named Paul Manafort. And Manafort has not only been a Washington lobbyist for decades, he's the shadiest kind of lobbyist thanks to his firm's unsavory client list." These include such political winners described as the "torture lobby." These were some of the most violent and oppressive leaders on the world stage today. "He's also represented Bane, Victor Von Doom, Skeletor — and worst of all Robin Thicke," Meyers joked.

Manafort was brought in to run a more traditional political operation after months of basically winging it with staff that has more of a background in catering to Trump's needs than winning campaigns. His role is also to "assure GOP officials that Trump, despite his public rhetoric, isn't going to war with the party." This brings us to the "second major quality Trump and his supporters often hold up as a reason to vote for him: That he tells it like it is." Meyers played a collection of clips of Trump supporters explaining they liked Trump because he didn't censor himself, he isn't a polished politician and says what he thinks.

So, Trump might be acting like he's keeping it real, "but his campaign is sending a very different message," Meyers noted. "Manafort met with members of the Republican National Committee to reassure them that Trump would tone down his attacks on the party. And in a leaked recording made this startling admission about Trump's 'truth telling' persona on the campaign trail."

Meyers then played the clip of Manafort saying, "When he's out on the stage, when he's talking about the kinds of things he's talking about on the stump, he's projecting an image that's for that purpose. The part he's been playing is evolving into the part that not only you've been expecting but he wasn't ready for because he had to first complete the first phase."

"What?!" Meyers exclaimed. "Are we really supposed to believe Trump has just been playing a part to win over conservative voters? You're telling me this was all just an act?" Meyers asked before playing clips of Trump phrases like "I love the Bible," "I love the Evangelicals," "I love the Tea Party," "I love NASCAR," "I love the South."

"So, Trump's campaign has now admitted that his personality on the campaign trail is, in fact, a show and that he can change his rhetoric any time he wants. Perhaps, the worst part of this is: It's working." If you watched Trump during his victory speech following the New York primary you saw a less insulting Trump and the media went nuts for it.

"Trump is a genius," Meyers concluded. "He set the bar so low that not calling his competition a liar is presidential. That's like a girl saying, 'he usually forgets Valentine's Day, but this year he got me two scratch-off tickets and a Coors Light. Boyfriend of the year!'"

This whole thing isn't just about aides going rogue, however, "Trump himself has been saying a version of this same thing for months." After playing clips of Trump swearing he could be presidential Meyers remarked that Trump is conning us even when he's openly talking about conning us. "Because Trump doesn't even seem to know what made Lincoln so presidential. When he was asked the question, 'why did Lincoln succeed,' Trump said this," Meyers said assuring the audience it was indeed the full quote.

"Well, I think Lincoln succeeded for numerous reasons," Trump began. "He was a man who was of great intelligence, which most presidents would be. But he was a man of great intelligence, but he was also a man that did something that was a very vital thing to do at that time. Ten years before or 20 years before, what he was doing would never have even been thought possible. So he did something that was a very important thing to do, and especially at that time."

"Why so vague?" Meyers wanted to know. "Did you forget he ended slavery or are you worried some of your supporters are still bummed out about that so you don't want to bring it up? Which is it?"

"Here's the thing, we shouldn't be surprised that Trump is trying to reinvent himself and that his campaign is openly admitting that the Trump candidate is just an act. Because Trump's entire business career has been built on obsessively manipulating the media. And this goes back decades."

It all began in the 1980s when the press would reach out to Trump for comment and were referred to a spokesman named John Barron. Barron spun Trump's business deals on the phone to reporters. An example is a deal for the Trump Castle, which Trump said would be "complete with spires, drawbridge, and [a] moat." In the end, the project failed and the land was sold, but John Barron spun the deal as a success because they got a big commission on the land.

All of this was fine until it was discovered that the spokesperson, John Barron, was actually Donald Trump hiding behind a fake name. "And of course his name was John Barron. It was either that or Fake Hugerson," Meyers joked. "So it shouldn't be a surprise that Trump is trying to reinvent himself. He created a fake persona to sell his products to an unsuspecting public and now, running for president, he's doing the same thing to sell his shIttiest product yet: Himself."

President Donald Trump has attacked Rep. Liz Cheney (R-WY) for the past several months after she said that the 2020 election wasn't fraudulent. Since the, he and his supporters in office have decided she can't be in the GOP leadership. Instead, they've opted to support another Republican with her own anti-Trump background.

"At one point Trump wrote she's a 'warmongering fool who has no business in party leadership' and 'Elise Stefanik is a far superior choice and has my complete support for conference chair,'" said anchor Jake Tapper. "Is Trump pulling the strings?"