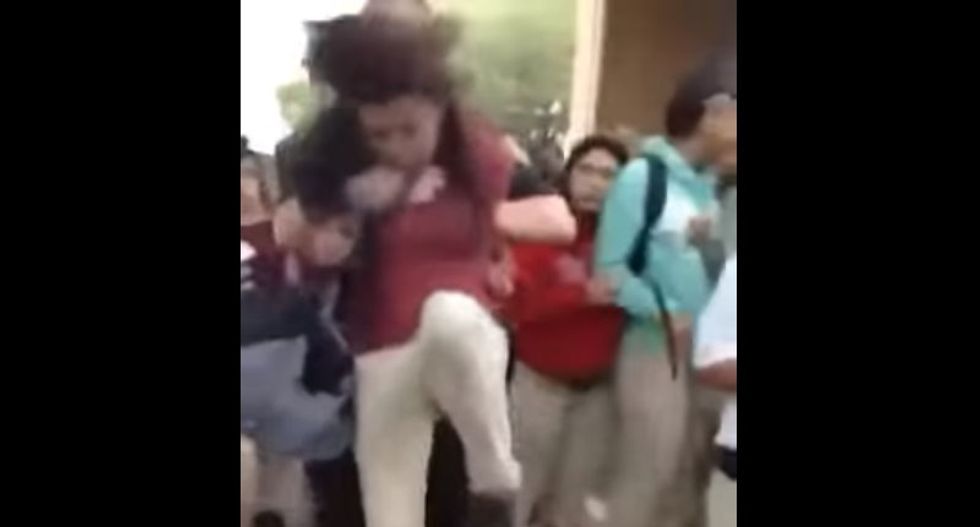 A school police officer in San Antonio, Texas, has been placed on leave after a video posted online showed him slamming a 12-year-old girl to the ground at a middle school, media reported on Wednesday.

The San Antonio Independent School District launched an investigation into the officer's actions, which occurred on March 29 as the officer was breaking up a confrontation between the girl and another student, according to television station KSAT.

The incident comes as police in the United States face greater scrutiny over use of force. Last year, a sheriff's deputy in South Carolina was fired after he was caught on video flipping a high school student out of her classroom chair.

In a video posted online on Tuesday, the San Antonio school police officer is seen holding the student from behind and then spinning around and throwing her to the ground.

Shocked student bystanders can be heard saying "she landed on her face" and "are you OK?" to the girl, while she lies motionless and the officer handcuffs her.

"The video is very concerning," San Antonio Independent School District spokeswoman Leslie Price told KSAT. "We need to find out all the details as to what occurred, but I can also say that we will not tolerate excessive force in this district."

Neither a representative from the San Antonio Independent School District nor the officer, Joshua Kehm, could be reached for comment late on Wednesday.

The video does not reveal what occurred before the school police officer grabbed hold of the girl. KSAT reported that other students told the station the girl had kicked the officer.

Kehm was placed on paid administrative leave after officials late on Tuesday learned of the video of the incident at Rhodes Middle School, according to the San Antonio Express-News.

Gloria Valdez, the mother of the 12-year-old girl, told KSAT that seeing the video left her upset and angry.

"You can actually hear it, her head hits the concrete, and that's what hurt me the most," Valdez told the station.