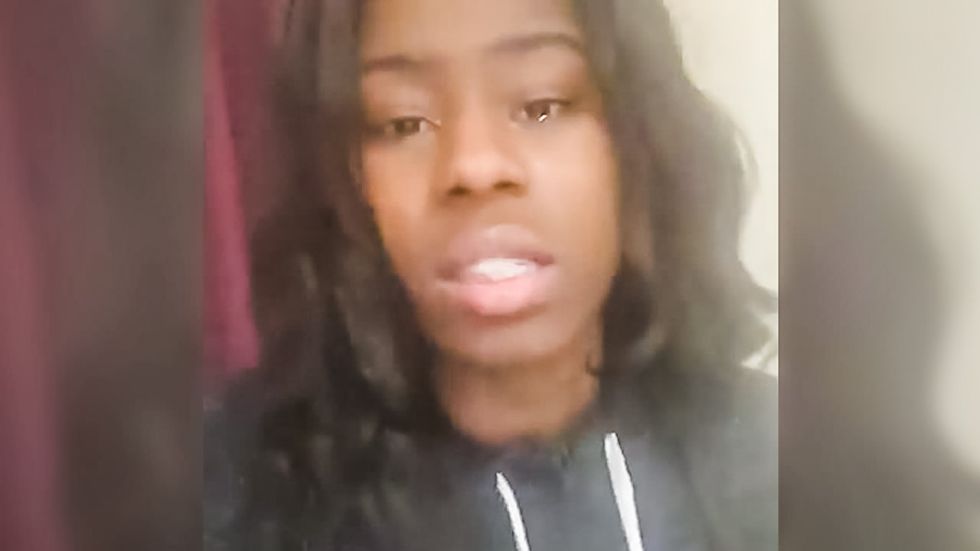 Officials at Southern Illinois University said that an investigation had been launched into allegations that students supporting Donald J. Trump for president had targeted black students with racial epithets.

In a video posted to Facebook last week, a tearful Leilani Bartlett recalls her encounter with Trump supporters on campus.

"I'm just casually walking to school," she recalls. "And you just see 'Go Trump' all over the motherf*cking floor on your way to class. You see 'Build a Wall' on the rocks and the monuments at the school. You see shit like 'F*ck Bernie,' shit like that."

But Bartlett says that it was the students having an "open Trump forum" at her dorm that were the most upsetting.

"I'm all about having your own political views," she explains. "But it's the point where it gets disrespectful. Me and my friends are the minority in this residence hall. Meaning, it's a handful of us and the rest are predominately white."

"You're openly discussing racism and being racist," Bartlett continues. "They said the Black Lives Matter movement was retarded, they told us to go back to Africa, they saying the N word, calling us n*ggers, all types of stuff."

Bartlett, however, vows in the video not to let the Trump supporters make her feel unwelcome "at a school that I pay $22,000 to go to."

"I refuse to pay my money to get an education, to set the standard, to set the precedent for my siblings, my sisters and brothers that they can be successful only for you to deny me?" she says. "No, bro. I went down there and I confronted all of them."

"Y'all want to have an open forum and an open discussion about black people, let me pull up a seat," Bartlett quips. "Let me hear everything you have to say in my face."

Bartlett argues that black students like her have the increased burden of worrying about "when I lay my head at night, what are they going to do to me at my dorm."

"And know that my school [is] not going to do nothing about it because this is a multitude of incidents!" she exclaims. "If you are at a predominately white institution and they trying to make you feel uncomfortable, they trying to shrink you -- at the end of the day, all you can do is continue to be you. All you can do is never let that shit get to you and keep being successful."

SIU spokesperson Rae Goldsmith confirmed that a formal complaint had been made against the Trump supporters.

"We’re taking it very seriously,” Goldsmith said. “We care a lot about the welcoming nature of our campus."

“Anything less diminishes all of us,” Colwell insisted. “Free speech is an important right and value. It is also important to use that right wisely and respectfully.”

A group of affluent white "Trump bros" in Minnesota recently told CBS News that they supported the billionaire candidate because they felt "persecuted" by society.

“There is a sentiment among frat guys, lacrosse players and middle class affluent white kids that they are kind of getting persecuted lately,” Barstool Sports founder David Portnoy explained. “It’s an F-U to society, who is telling us we are a bad guy because we like hooking up with girls on spring break. And they see Trump sticking up for that.”

Racism at SIUC. I'm at my residence hall and all I hear is TRUMP 2016. The same group of kids in a fraternity ( ATO) drew Trump 2016 and various racial slurs with chalk on the ground and on campus monuments. The campus did NOTHING about it. They had multiple open discussions in the hallway that were completely and utterly racist. Asking black ppl to go back to Africa , throwing the "N" word around like it was nothing. So I walked my BLACK ASS downstairs and asked them to say it in my face. Call me nigga , call me a good for nothing welfare recipient like I'm not here paying MORE than you. Y'all get ahead with handed scholarships , and grants while the poor will be lucky if they see either or. The Residence Assistant on their floor stood in solidarity WITH THEM. Who do you go to when your oppressors are your authority? The craziest part about it is that these are the ppl I will compete against in CORPRATE AMERICA. These are people I will potentially work with side by side. They have no respect for not only me as an individual , but my entire RACE. How do I tell my sisters and brothers that it's safer fighting for your education than it is in the streets of Chicago. The reality is that neither is easy. All you can do is strive harder.