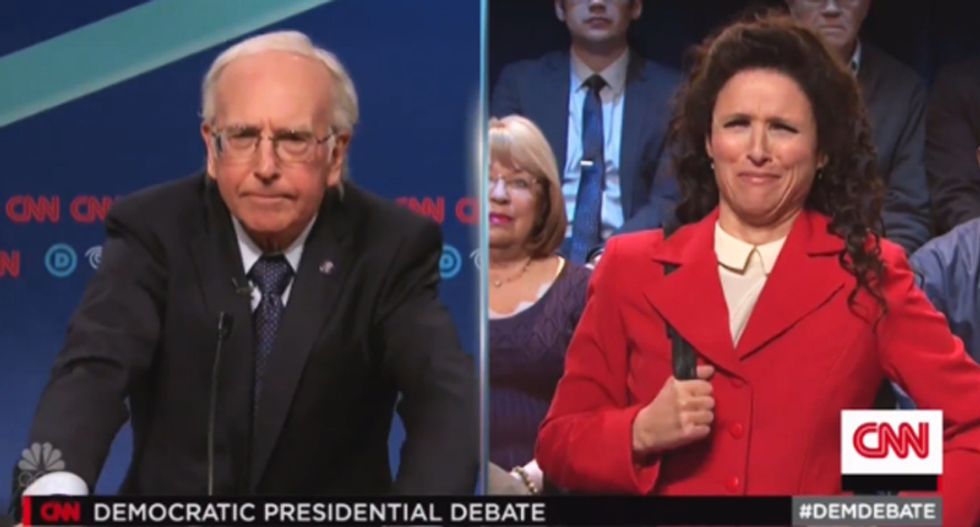 The opening of Saturday Night Live was a double treat if you're a fan of both Larry David's dead-on impersonation of Vermont Sen. Bernie Sanders and television comedy classic Seinfeld -- created by David along with comedian Jerry Seinfeld.

The setting was the Thursday's squabbling Democratic debate in New York -- dubbed the 'Brooklyn Brawl'  -- between David's Sanders and Kate McKinnon's Hillary Clinton.

Jumping to the Seinfeld references, SNL host Julia Louis-Dreyfus reprised her role as Seinfeld's Elaine Benes, plucked from the audience to ask questions of the two candidates.

"So, listen, you've been pretty vague in the past, but how exactly are you going to break up the big banks?" Benes asked Sanders.

"Once I'm elected president, I'll have a nice schvitz in the White House gym," Sanders explained. "Then I go to the big banks, I'll sit them down and yadda yadda yadda --- they'll be broken up!"

"What? No, no," Benes replied. "You can't yadda yadda at a debate! Also, you yadda yadda'd over the best part!"

"No. I mentioned the schvitz! "Sanders shot back.

Watch the video below for more Seinfeld in-jokes -- including David doing a George Costanza impression -- from SNL: