Stephen Colbert and his bandleader share an amazing story about Prince: 'He had a huge aura' 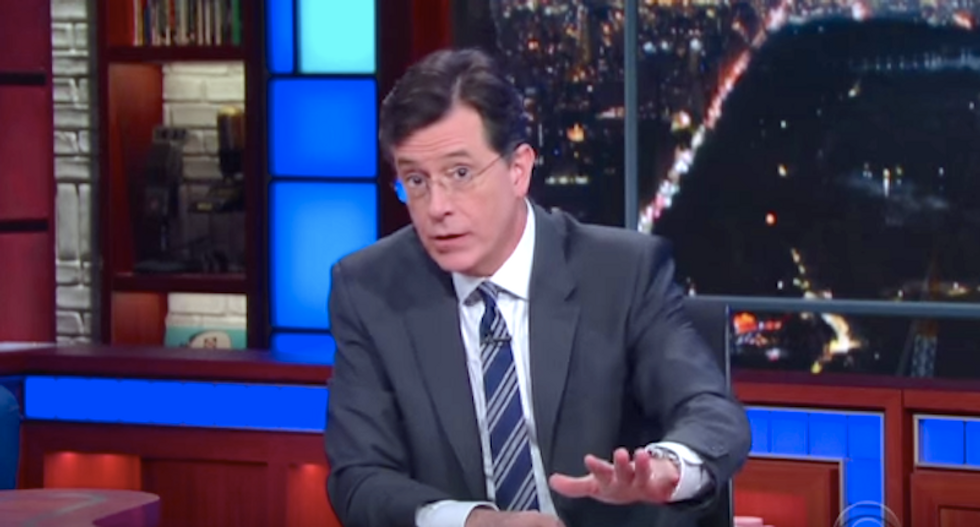 Stephen Colbert broke the news of Prince's passing to his audience Thursday on the "The Late Show," and the stunned silence was broken by cries of "no" by at least a couple of viewers who hadn't heard yet.

"Besides being a beautiful artist, not many people are influential enough to be known by one name, let alone by one color -- but he was," Colbert said. "So in a small gesture of respect tonight, we'd like to change the set in his honor."

The lights around the set turned from predominantly blue to entirely purple to honor the pop music legend, who was found dead at his home at age 57.

Colbert said he'd been a fan since high school, when a classmate brought a copy of Prince's first album to their choir class, and students had to listen with headphones on so the adults couldn't hear the indecent lyrics.

But his bandleader, Jon Batiste, and some of the other "Late Show" musicians had worked with Prince in the past.

"He had a huge aura," Batiste said. "His energy and presence in a room just kind of filled everybody's hearts."

"I remember one time we were backstage, and I was talking to him, and without even looking in the direction, just pointing his finger, he says, 'Courtesy,'" Batiste said. "Then you look over there, and there's five people over there -- you don't know what he's talking about. Then you turn, and they had a cat with his phone filming our conversation."

"He figured out through all that was going on backstage, musicians playing and everything happening, you know, 'Courtesy -- put the phone away,'" Batiste continued. "Then he said, 'Down.' Cat put it down. 'In your pocket.' Cat put it in his pocket. 'Thank you very much. Okay, Jon -- so how are you?'"