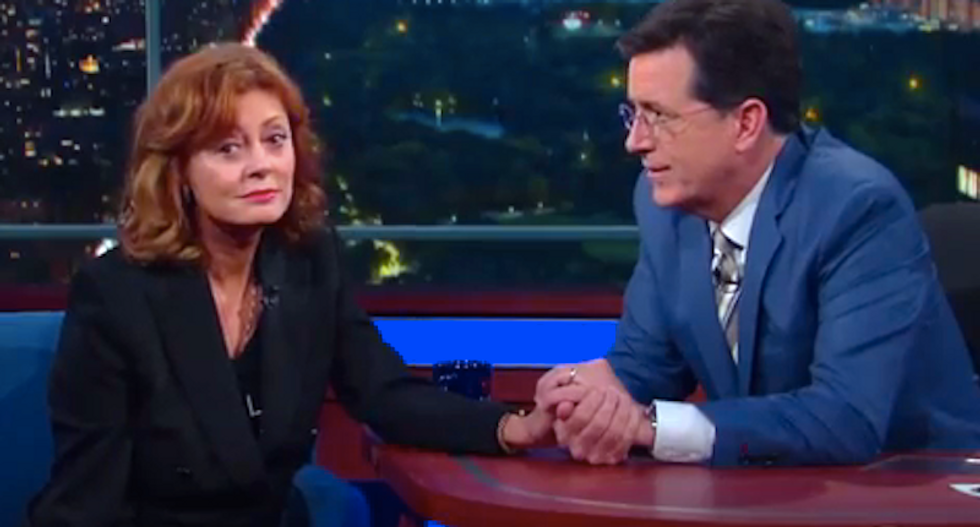 Susan Sarandon appeared Wednesday night on "The Late Show with Stephen Colbert," where she explained why she had to "break up" with Hillary Clinton.

She shared a photo of herself with Clinton, but she said the Democratic presidential candidate had lost her support after backing the Iraq War and promoting fracking overseas.

“I told her don’t go in Iraq -- I’m very upset about that,” Sarandon said. “I said, you know, there’s not enough evidence and there’s no exit strategy -- everything that everyone was saying -- and she went in.”

Sarandon said she could no longer trust Clinton because of her environmental policies.

“Fracking is absolutely the worst thing you could do for the environment,” she said. “She goes behind my back and she’s selling it all over the world.”

"If you google his speech, it's just so clear against the war -- at a time, you know, gay rights, before it became easy," she said. "He's always there before it becomes simple."

She suggested Sanders could win the Democratic nomination at a contested convention on the strength of his ideas.

The actress has drawn criticism for suggesting she would rather see Donald Trump elected than Hillary Clinton, if Sanders fails to win the Democratic presidential nomination -- but she claimed her words were taken out of context.

"Wait a minute -- I said some people say (Trump would bring the revolution faster)," Sarandon said. "I'm more afraid of, actually, Hillary Clinton's war record and her hawkishness than I am of building a wall, but that doesn't mean that I would vote for Trump."

She doubted whether Trump could actually win the Republican presidential nomination -- let alone the general election.

"Come on, who's going to vote for Trump, seriously?" Sarandon said, but Colbert reminded her that many Americans would. "A lot of people -- but not a lot of women, not a lot of minorities, you know, once you get the information out there. He's been doing well against a crowded field, but we'll see what happens."