Ted Cruz aims to emerge from Wisconsin as Trump alternative 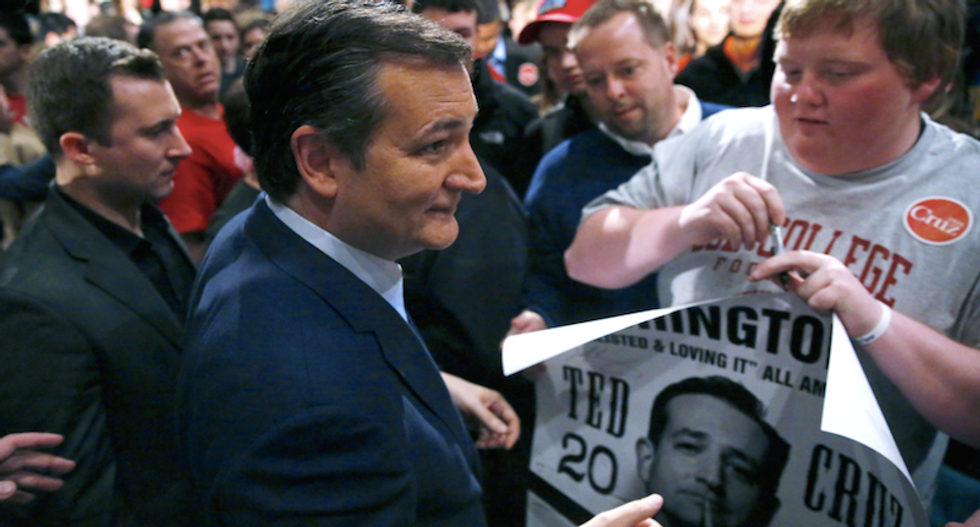 U.S. Republican presidential candidate Ted Cruz appears poised for victory over Donald Trump in Wisconsin on Tuesday, presenting himself as a uniter for Republican voters despite a Senate tenure marked by bitter feuds and uncompromising stances.

Cruz, a first-term U.S. senator from Texas, is trying to make the case he is the last remaining Republican candidate not named Trump with a pathway to the party's presidential nomination and the best choice left for Republicans who cannot bring themselves to vote for the New York billionaire.

Wisconsin will be a test of whether his strategy will work. Opinion polls show he has opened up a lead on front-runner Trump, with a third candidate, Ohio Governor John Kasich, running third.

"The entire country is looking to Wisconsin," Cruz said on Monday. “What we are seeing in Wisconsin is the unity of the Republican Party manifested.”

Trump brought his wife, Melania, on stage on Monday night in Milwaukee, an apparent effort to repair his image with women who polls show overwhelmingly oppose him.

"No matter who you are, a man or a woman, he respects everyone equal," she told the crowd.

In the Democratic race, U.S. Senator Bernie Sanders of Vermont has a slender lead in opinion polls in Wisconsin over front-runner Hillary Clinton and is trying to add to his momentum after winning five of the last six contests. He still faces a tough task in defeating the favored Clinton for the nomination for the Nov. 8 election.

Playing a party uniter is an unlikely role for Cruz, who forced the U.S. government to shut down for six days in 2013 in a budget fight with Democratic President Barack Obama. Republicans ended up being blamed for the shutdown and Cruz's relationship with Senate Republicans leaders has been stormy.

But enmity toward Trump among many is such that Cruz can now count five of his former rivals for the presidential nomination among his backers, including U.S. Senator Lindsey Graham of South Carolina, who said earlier this year that the choice between Trump and Cruz "is like being shot or poisoned."

Cruz has taken steps to warm up his image. He told Fox News anchor Megyn Kelly in a town hall on Monday in Madison, Wisconsin, that he wished he had done a "better job reaching out" to his Senate colleagues and building a broader coalition.

But he is as strident as ever when it comes to the presidential race. He told reporters that only he and Trump had the ability to earn the 1,237 delegates necessary to win the nomination outright.

He said if no candidate received the required number of delegates, Republicans' choices at a contested nominating convention in July would be limited to him and Trump, because Kasich had not won the minimum eight states to get on the convention ballot.

Cruz rejected talk that establishment Republicans might seek to nominate a new face at the convention, with names circulating like House of Representatives Speaker Paul Ryan or 2012 nominee Mitt Romney. He called it a "fevered pipe dream of Washington that at the convention they will parachute in some white knight."

"It ain’t going to happen. If it did, the people would quite rightly revolt," said Cruz.

Some of Cruz's supporters doubt a brokered convention would lead to a White House victory over the Democratic nominee in November.

"It would destroy the party," said Brandon Meese at a Cruz rally in Green Bay, Wisconsin, on Sunday.

While Cruz may carry the day in Wisconsin, it does not get any easier for him. The next states to vote, including New York on April 19 and five Northeastern states on April 26, are more Trump-friendly territory.

Cruz has 463 delegates, 774 short of the total needed for the nomination, according to an Associated Press count. Kasich, with 143 delegates, has no chance to gather enough delegates to win on the first ballot but has refused to end his candidacy.