In just a few short weeks, Zika has shot from being an obscure infection to a headline-hitting public health disaster. The virus is spreading rapidly across the Americas (and potentially beyond), is suspected of being associated with birth defects that affect brain development and currently has no specific vaccine or treatment.

Understandably, scientists are scrambling to respond to what the World Health Organization is now calling a “Public Health Emergency of International Concern.”

In the arsenal of weapons against the mosquito-borne disease, there are tried and tested approaches that include the liberal application of insecticides and repellents, widespread use of mosquito nets and elimination of breeding sites.

Yet to combat Zika and other mosquito-borne disease, more is needed. Which is why scientists are increasingly turning to emerging technologies such as synthetic biology for solutions.

The joke goes that if you get 10 synthetic biologists in a room together, you’ll get 10 different explanations of what they do. After all, synthetic biology is a young and rapidly evolving field. But underneath this lack of clarity lies a clear and profound shift in our technological capabilities – the ability to “upload” genetic code to computers, edit and manipulate it, and then “download” it into living organisms.

In effect, we’ve discovered how to hack biology – how to code in DNA and computer-design living things.

It’s early days yet – biology is complex and messy and doesn’t follow the same rules as computer code. But increasingly, scientists are learning how to use synthetic biology to change how organisms operate – including insects that carry dangerous human diseases, such as Zika. 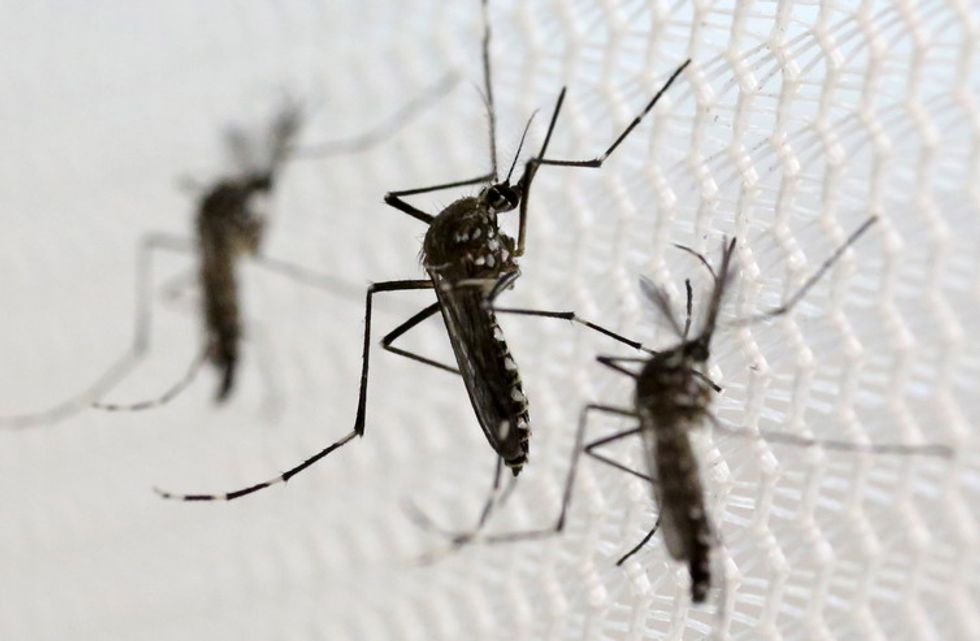 Turn off a gene and goodbye mosquitoes

Using synthetic biology-based genetic engineering techniques, the British company Oxitec (owned by U.S.-based Intrexon Corp) has successfully added a genetic switch to Aedes aegypti mosquitoes, the species that carries dengue and Zika. As long as the insects are fed the antibiotic tetracycline, the switch remains off and the bugs are fine. But remove the drug, and the switch is activated – preventing genes from working, and ultimately killing the mosquito.

It’s a trait that enables the controlled decimation of wild mosquito populations.

The key is that this genetic kill switch is inherited by the Oxitec mosquitoes' offspring. When modified male mosquitoes (which don’t bite) are released, they mate with wild females and pass on the trait before dying, ensuring that a sizable portion of the next generation of tetracycline-starved wild mosquitoes die before reaching maturity.

Repeat this a few times, and you eradicate the local Aedes aegypti mosquito population. 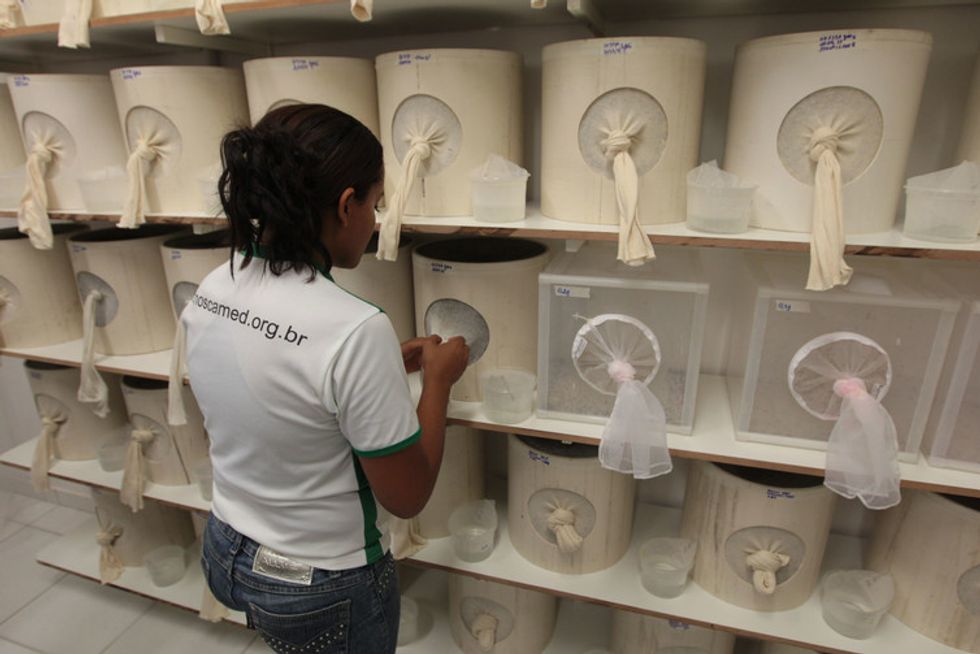 Rearing genetically modified mosquitoes before release to the wild.

But this use of synthetic biology is only one of a number of ways in which the technology can potentially be used to combat the disease.

In 2005, the synthetic biology pioneer Drew Endy outlined an audacious and thought-provoking vision for “engineering biology” in the journal Nature. One idea is particularly relevant to emerging infectious diseases like Zika: using synthetic biology to rapidly develop vaccines.

Vaccines typically involve exposing a patient to inactive viruses or to materials that mimic the specific features of these viruses that trigger an immune response. The aim is to stimulate the immune system into building immunity, without it being exposed to a live, and potentially deadly, virus.

Using traditional techniques, developing vaccines can be a long and arduous process. However, researchers are now looking at how they can digitize viral DNA and RNA sequences, and use these to rapidly design and produce new vaccines that activate the immune system in the same way as the virus, without causing infection. And synthetic biology is also opening up the possibility of “smart vaccines” that can be programmed to produce a range of different molecules that trigger an immune response, as and when needed.

A unique advantage of this approach is that, once the genetic code for a vaccine has been developed, it can be distributed digitally. It becomes – in principle – possible to produce vaccines on-site, on demand. No slow, risky physical distribution – just the vaccine that you want, when you want it, at the press of a button.

We’re not there yet – and even as the technology becomes feasible, there are substantial regulatory challenges to be dealt with. Yet synthetic biology is progressing fast enough that it won’t be too long before the technology is playing a major role in vaccine development and distribution.

Before we get there, though, a third use of synthetic biology may be employed that makes vaccines redundant: gene drives.

In November 2015, microbiologist Anthony James at the University of California Irvine and his colleagues demonstrated how heritable traits – in this case a genetic intolerance of the parasite responsible for malaria – can be spread through an entire population. What they showed in effect is that, using synthetic biology, whole species can be reengineered with designer traits.

The concept is called a “gene drive,” and it’s been around for a while. But only with the advent of precise gene editing techniques such as CRISPR have they become feasible.

CRISPR is a genetic “search and replace” technique that allows scientists to target and swap out specific DNA sequences. On its own, this isn’t enough to transform a whole species – every time a CRISPR mosquito (for instance) mated with an unmodified mosquito, the designer-code would be diluted. But here’s the clever bit.

Imagine that CRISPR is used to insert a genetic sequence in a mosquito that not only prevents it from hosting the malaria parasite but also includes a copy of the same CRISPR “search and replace” code. Now, whenever the original DNA sequence reappears – for instance, in the genes of offspring after mating with an unmodified mosquito – that embedded code would search out the original genes that support the malaria parasite and replace them with the new modified genes.

In this way, the modification would be transmitted down through every generation of mosquitoes, until all that remained was a human-designed species that is unable to host the malaria parasite.

Can we eliminate diseases like Zika, dengue and malaria using gene drives?

It’s a wickedly smart biological hack that draws heavily from tricks and techniques learned from computer coding, and is possible only because of advances in synthetic biology.

Gene drives haven’t been developed for the Aedes aegypti mosquitoes that carry the Zika virus yet. But given the power of the technique, it’s only a matter of time before someone begins to seriously consider redesigning the species with the aim of eradicating the disease.

And this is where things get tricky. 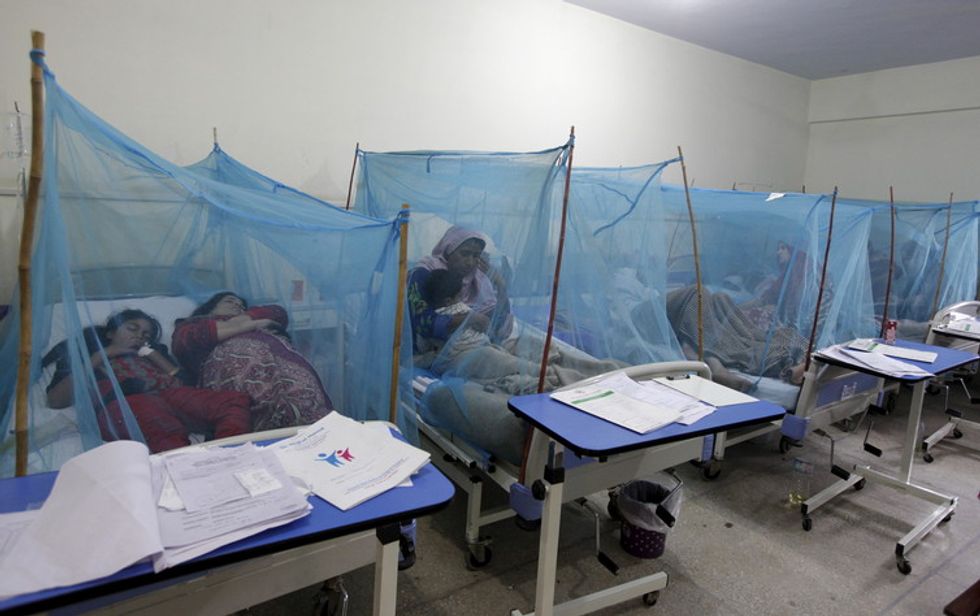 There are many compelling reasons for reengineering mosquitoes or obliterating them altogether: hundreds of millions of infected people and damaged lives, for a start.

Yet eliminating or reengineering a complete species is a big step to take, especially when the unintended consequences are far from clear.

Over the past year or so, synthetic biology and gene editing have transformed our ability to manipulate nature. We’re beginning to redesign and recode DNA almost as easily as we can write smartphone apps. And we’re doing this with all the clever techniques learned from decades of computer programming.

Yet we still have only the vaguest ideas of how the systems we’re hacking actually work. It’s as if we’ve been given free rein to play with life’s operating system code, but unlike computers, we don’t have the luxury of rebooting when things go wrong.

This is not an argument against using synthetic biology to combat Zika and other infectious diseases – far from it. If developed responsibly, the technology could save millions of lives, and improve living conditions for countless more. It does mean, though, that we have to be exceptionally cautious in how we proceed – and take every ounce of advice and insight we can get on how to weigh the potential risks and consequences of what we do.

The good news is that scientists are already taking the responsible development and use of synthetic biology seriously. Recently, the U.S. National Academy of Sciences, the Chinese Academy of Sciences and the U.K.’s Royal Society cohosted an international summit on human gene editing. The resulting statement stressed the need for an ongoing forum to ensure the responsible and acceptable use of the technology. And scientists are already working on ways in which gene drives can be halted or reversed if they go wrong.

Yet as enthusiasm grows over the use of synthetic biology to combat diseases like Zika, greater efforts are needed to understand what could go wrong, who and what might potentially be affected and how errors will be corrected.

Without a doubt, infection-carrying mosquitoes are a global public health challenge, and the current spread of Zika is only emphasizing this. Using synthetic biology to prevent infection – either through vaccines or mosquito modification or elimination – would dramatically improve the lives of hundreds of millions of people. As Zika continues to spread – and if the suggested link with birth abnormalities is confirmed – synthetic biology could be one of our best hopes for containing and combating the disease.

But only if we learn fast how to use this powerful technology responsibly.