Trans teen and mom grabbed and tossed from Ted Cruz rally in Maryland: They just 'laughed at us' 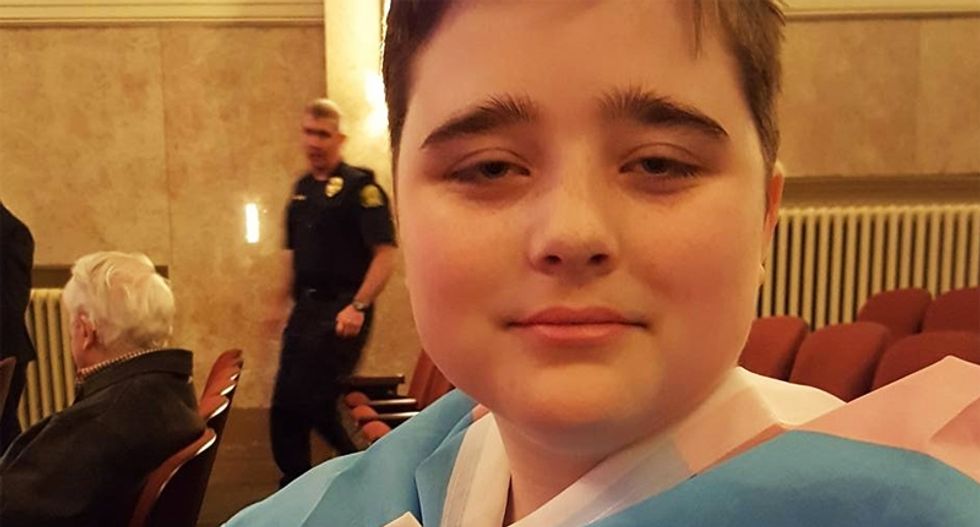 James Van Kuilenburg with security coming from behind via Facebook

A transgender teen and his mother said they were booted from a Ted Cruz rally in Maryland before it began -- even though they had reserved tickets for the event -- and were laughed at when they tried to complain to security outside the event.

According to the Washington Blade, 16-year-old James Van Kuilenburg wrote on his Facebook page that he and his mother were patiently sitting at the rally held for Texas Sen. Ted Cruz when he was tapped on his shoulder and told he would have to leave.

"Before we even had a chance to see Cruz, I was tapped on the shoulder. When I turned, there was a Campaign Staff member, asking me to leave. I am a visibly trans person, and I'm proud of it, so I wore my trans pride flag around my shoulders and a National Center for Transgender Equality shirt," Van Kuilenburg wrote. " The campaign staff member kept holding on to me, saying the 'event staff were asking me to leave.' I then asked what the reason was, but he only repeated himself. When I asked for a reason again, he told us to follow him to the event staff."

According to the teen, when he attempted to approach the national press covering the event and tell them he was being booted, he was grabbed and pulled away.

"The staff that were following us grabbed me again, and told me 'ma'am I need you to cooperate and not shout.' I corrected him, telling him that I'm a boy, and he briefly apologized. When we met with event staff they told us that because we were in a private event, they had grounds to tell us we were 'trespassing.' We explained that we reserved tickets, and they then went on to explain that they had 'observed us taking part in a event outside.'"

Van Kuilenburg admitted that he and his mother held signs outside the event -- with his reading "Human rights are not up for debate" -- but that they left them behind before entering the rally.

Upon being ejected, the teen said their complaints were dismissed.

"We were then pushed out of the venue. When trying to explain what had happened to the Cruz volunteers outside, they laughed at us," he wrote. "The level of disrespect and aggression there was outstanding."

Candidate Cruz has been critical of laws protecting the LGBT community, and at the Maryland rally called out rival Donald Trump for saying transgender people should be able to use whichever bathroom they want.

"Have we gone stark-raving nuts?" Cruz asked the crowd.