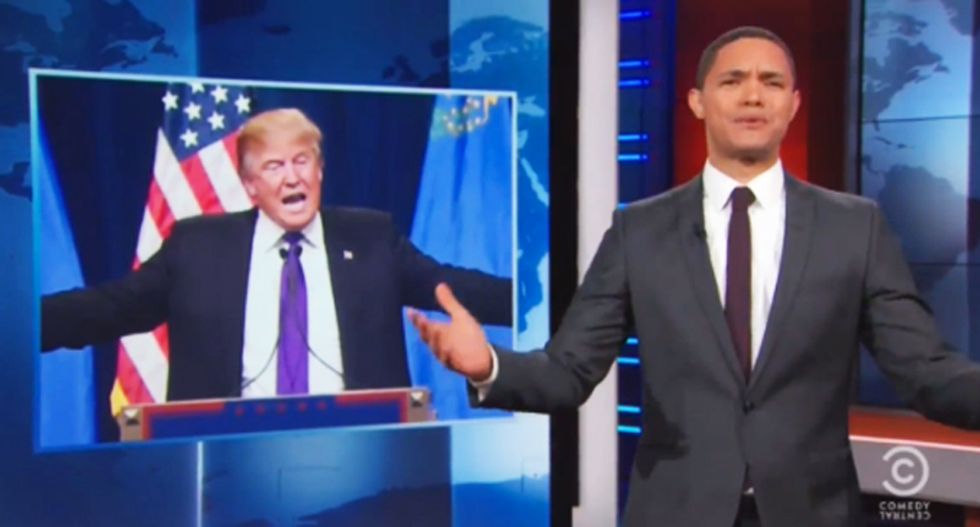 Daily Show host Trevor Noah took the cable talking heads to task Wednesday night for changing their tune on GOP front-runner Donald Trump because he managed to get through his victory speech in New York without insulting anyone.

Tuesday night Trump gave what --  for him at least -- was a relatively subdued speech after destroying Texas Sen. Ted Cruz and Ohio Gov. John Kasich at the polls in New York's Republican primary

"Donald Trump crushed it," Noah said, "On probably the best night of his life that didn't involve a swimsuit competition."

"What we got to see yesterday was a new Trump," Noah continued. "He was succinct. Disciplined. And respectful. Which, according to the media, made him presidential as balls."

Noah then shared clips of Fox's Geraldo Rivera, CNN's Gloria Borger and even Trump nemesis Megyn Kelly praising the candidate as "presidential," after a campaign filled with insults for his opponents and adversaries.

"'And he wasn't racist. And he didn't call any female reporters a bimbo? This guy is ready for the White House -- give him the codes!'" Noah mocked Kelly.

"This is ridiculous," Noah continued. "Trump has basically lowered the media's expectation so much that not insulting someone seems presidential to them. That's a tactic straight from The Art of The Deal. Wear people down so that they will accept the bare minimum."

"Trump stabbed a stranger of Fifth Avenue!" Noah smirked. "Yeah, but at least he didn't shoot them. He's so presidential!"

Watch the video below from Comedy Central: