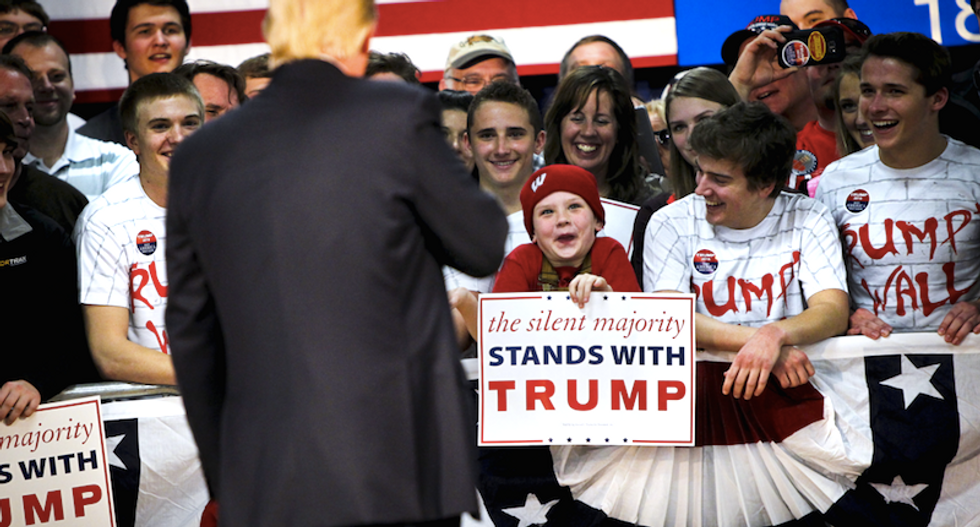 A young Donald Trump supporter reacts to being talked about by the candidate at a campaign town hall event in Wausau, Wisconsin. (REUTERS/Ben Brewer)

Republican presidential front-runner Donald Trump tried to put a difficult week behind him and rally his supporters on Monday ahead of a crucial nominating contest in Wisconsin, where he was in the unfamiliar position of underdog.

Opinion polls show Trump trailing U.S. Senator Ted Cruz of Texas in the Midwestern state, where a loss on Tuesday could dent the New York billionaire's aura of inevitability and make it harder for him to win the 1,237 delegates needed for the party's nomination for the Nov. 8 election.

Trump hunted for support at two rallies in the state on Monday, telling voters in La Crosse, Wisconsin, they could propel him toward the nomination by delivering him a surprise victory over Cruz.

Trump said an array of forces were aligned against him in Wisconsin, including the state's governor, Scott Walker, who has backed Cruz, a "very hostile media" and party establishment figures worried he will lead Republicans to a broad defeat in November.

He ridiculed the "NeverTrump" movement to block his nomination and said the party establishment should have put the same effort into beating Democratic President Barack Obama in 2008 and 2012.

"If they had worked this hard to stop Obama, Obama wouldn't have had a chance," Trump said at a rally in Superior, Wisconsin.

He also said it was "unfair" that rival John Kasich, the governor of Ohio, refused to get out of the race despite trailing Trump and Cruz badly.

Trump has won 736 delegates to the July nominating convention in Cleveland, but is still 501 short of the majority he needs to clinch the nomination. Rivals Cruz and Kasich hope to stop him short of a first-ballot victory and trigger a contested convention.

Cruz told reporters the party was beginning to rally behind him, and said a win in Wisconsin would spark a surge of momentum for him in upcoming contests.

"What we’re seeing is the party unifying behind our campaign," Cruz said in Madison. "I hope and believe tomorrow night's going to be a very good night here in Wisconsin."

A Trump loss would cap a rough week, including an avalanche of criticism for his suggestion, which he later dialed back, that women be punished for getting abortions if the procedure is banned. Uncharacteristically, Trump also acknowledged that he made a mistake retweeting an attack on Cruz's wife, according to the New York Times.

He also drew fire last week for saying he would not rule out using nuclear weapons in Europe and that Japan and South Korea might need their own nuclear arsenals to ease the U.S. financial commitment to their security.

Trump told the crowd in Superior he had been advised that he should act more presidential but that if he did, it would be boring and "only about 20 percent of you would be here."

Cruz was eager to capitalize on Trump's missteps, talking about his family during a town hall session in an attempt to soften his strident image and appeal to women turned off by Trump’s recent comments.

At a later rally, Cruz told voters the entire country was looking toward Wisconsin.

"Let’s show the country that this race is not about yelling and screaming and insults," he said in Madison.

Even with a victory in Wisconsin, Cruz faces difficult odds to win the delegates needed to secure the nomination, given that the next states to vote, including New York on April 19 and five Northeastern states on April 26, are more Trump-friendly territory.

Cruz has 463 delegates, 774 short of the total needed for the nomination, according to an Associated Press count. Kasich, with 143 delegates, has no chance to gather enough delegates to win on the first ballot but has refused to end his candidacy.

He rejected Trump's call for him to get out of the race and poked fun at the front-runner's complaints.

"I've got news for him. I'm gonna get a heck of a lot of his voters," he told a town hall meeting in Hempstead, New York. "I know how to fix these things that the Trump voters care about."

In the Democratic race, U.S. Senator Bernie Sanders of Vermont has a small lead in opinion polls in Wisconsin over front-runner Hillary Clinton and is trying to add to his momentum after winning five of the last six contests.

A Wisconsin win by Sanders would put the focus on the April 19 contest in New York, where Clinton was campaigning on Monday. Sanders still faces a tough task to overcome Clinton's lead of 263 pledged delegates in the Democratic race, which awards all delegates proportionally to their vote totals in each state.

After days of sparring over the date for their next debate, Clinton and Sanders have agreed to hold the event on April 14 in Brooklyn, New York.

Clinton reported on Monday that she had raised $29.5 million in March for the primary campaign, trailing the $44 million Sanders reported raising in March. Clinton's campaign said she raised an additional $6.1 million for the Democratic National Committee and state parties.

At a New York City event celebrating a hike in the state minimum wage to $15 an hour, Clinton noted Trump had said wages were too high. That drew boos from the crowd, which included a large number of labor union members.

"I don’t know what the calculation is by Trump and others but I’ll tell you this: They are selling Americans short,” Clinton said.