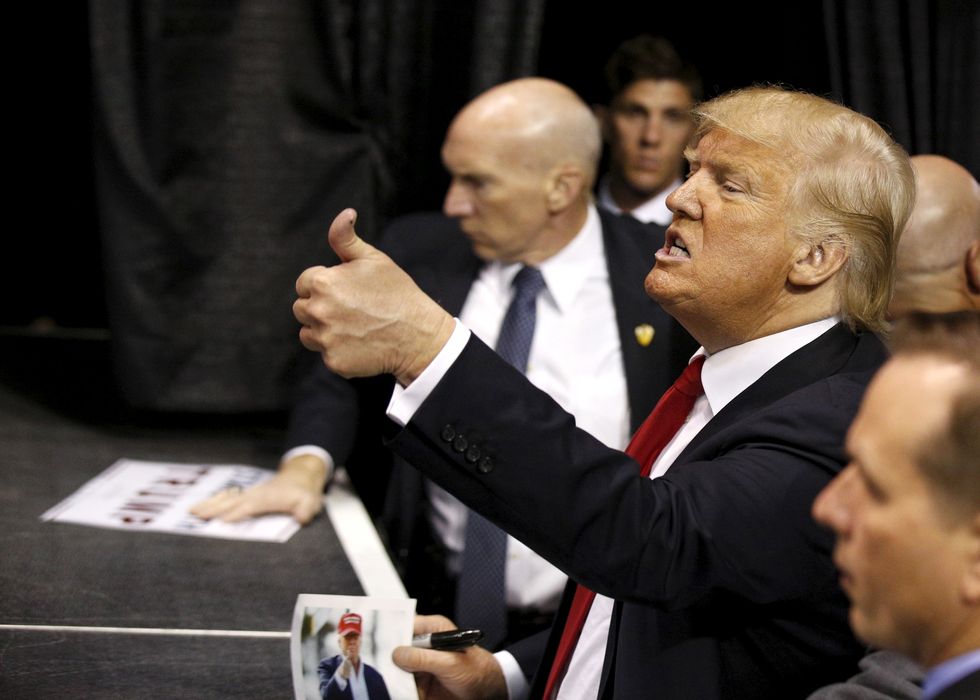 Donald Trump is poised to extend his lead in the Republican presidential race in a string of East Coast primaries on Tuesday, but a complicated contest in Pennsylvania, the day's biggest prize, will test his recently reorganized campaign.

The state features the sort of complex rules that Trump has repeatedly slammed for being "rigged" and that forced him this month to reshuffle his team to better compete with Ted Cruz, his main rival for the 1,237 delegates needed to win the nomination for the Nov. 8 election.

"It's as crooked almost as Hillary Clinton," Trump said on Monday at a campaign event in West Chester, Pennsylvania, taking a swing at both the Republican primary rules and the Democratic presidential front-runner.

Just 17 of the 71 Republican delegates up for grabs in Pennsylvania on Tuesday are allocated to the candidate who wins its primary. The other 54 delegates - who are elected directly by voters - are free agents, able to support anyone they choose at the Republican National Convention in July.

Polls show Trump leading in all five of Tuesday's nominating contests in Pennsylvania, Connecticut, Rhode Island, Delaware and Maryland, which have a total of 118 pledged delegates at stake in addition to the 54 unbound Pennsylvania delegates.

Cruz and Ohio Governor John Kasich, the third Republican in the race, have formed an anti-Trump alliance in an effort to stop the New York billionaire from reaching a first-ballot victory at the July convention in Cleveland, Ohio.

Former Republican presidential candidate Ben Carson, a Trump supporter, said the deal between Kasich and Cruz would backfire because it smacks of the type of backroom politics that people are rejecting.

"The people have sort of risen up and they’ve said we don’t want all this stuff that is going on, all this intricate, backroom stuff," Carson said on Fox News Channel.

But Gertrude Taylor, 86, who was voting in the Philadelphia neighborhood of Fishtown, said she cast a ballot for Kasich because he was a "down-to-earth man" and there was "no way" she could back Trump.

"He's too outspoken, he gets mad if things don’t go his way. I think he should keep him thoughts to himself," Taylor said.

In the Democratic race, Clinton also looks set to solidify her lead over U.S. Senator Bernie Sanders of Vermont in Tuesday's contests.

Sanders, who has attacked Clinton from the left with pledges to do more than she would to address social inequality, insisted he stood a good chance to win some of the states. "I think we've got a path to victory and we're going to fight this until the last vote is cast," Sanders said on CNN.

Before polls opened, Trump continued battering the Republican delegate allocation system as rigged. "The whole delegate system is a sham," he said on Fox News.

On Twitter, he expressed sympathy for Sanders, saying he also had been "treated terribly" in the Democratic race. Clinton, who leads Sanders by more than 250 pledged delegates, has expanded her lead with the help of superdelegates who are free to support any candidate.

Trump, who would benefit if he faced two opponents in November instead of one, suggested Sanders "should show them, and run as an independent!" Sanders has said he would not make an independent run for the White House, and his wife, Jane, repeated that pledge.

"Bernie will not be running as an independent," she said on CNN.

While railing against the Republican system, Trump announced on April 7 he was reorganizing his campaign to focus on delegate and convention strategy, hiring advisers with convention experience.

In Pennsylvania, candidates hope to get as many die-hard supporters as possible elected as delegates, both to build support on the first ballot and to bolster their position if no one gets to 1,237 delegates outright and the Cleveland convention becomes a protracted fight for the nomination.

It is unclear if Trump's campaign revved up its efforts in time to make a difference in Pennsylvania's delegate race.

U.S. Representative Lou Barletta of Pennsylvania, a Trump surrogate, said the campaign had taken some steps, including printing cards naming its preferred candidates for delegates so that voters going to the polls would know who backs Trump.

Before that, "we were just scribbling names on a piece of paper for them," Barletta said. "I think the organization coming here to Pennsylvania was just in the nick of time."

Cruz's Pennsylvania chairman, Lowman Henry, said he had not noticed a ramp-up by Trump there. "All we've noticed is a bunch of whining about it," he said. "Our response is: They whine, we win."

Cruz, a U.S. senator from Texas, has met with would-be delegates who have promised to support him if they are elected, as well as candidates who have not declared any allegiance, Henry said. Kasich has also met with prospective delegates.

It is difficult to predict which presidential candidate will get the most support from Pennsylvania. Many delegate candidates have said they will vote for whoever wins the state or their district, at least on the first ballot at the convention.

If those delegates hold to their informal promises, Trump could win most of Pennsylvania's votes on the first round in Cleveland, said Charles Gerow, a conservative strategist also running to be a Pennsylvania delegate.

But if Trump falls short of the votes needed to win on the first ballot in Cleveland, and delegates across the country begin switching sides, the efforts now being made to woo Pennsylvania delegates could pay off.

(Reporting by Emily Stephenson in Washington; Additional reporting by Doina Chiacu in Washington and Amanda Becker in Philadelphia; Writing by John Whitesides; Editing by Peter Cooney and Frances Kerry)