Trump attacks Clinton on gender: 'He's not going to treat her with any sort of kid gloves' 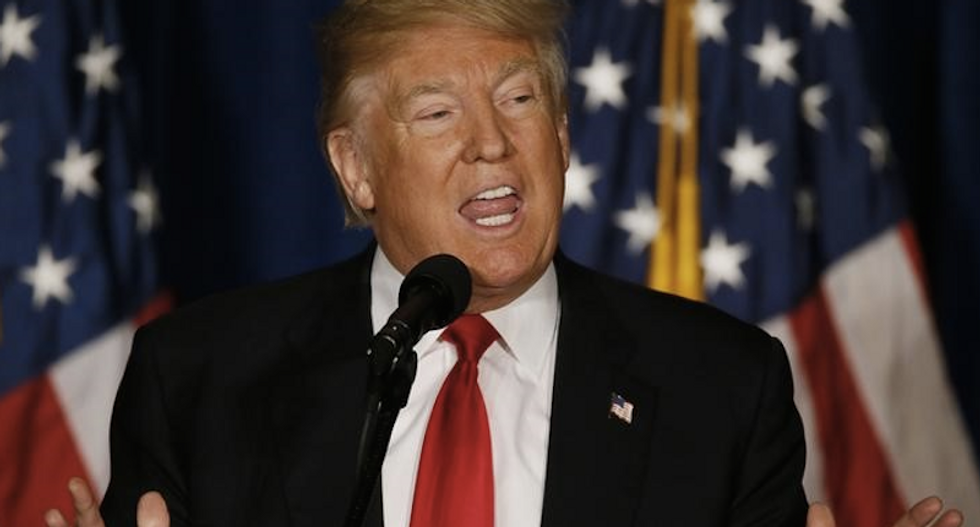 Republican presidential front-runner Donald Trump waded into politically risky territory this week when he accused Democrat Hillary Clinton of exploiting her gender to win votes and said she would have little support if she were not a woman.

As Trump and Clinton, fresh off big wins in Northeastern state primaries on Tuesday, circle each other for a potential matchup in the Nov. 8 U.S. presidential election, his comments portended what could be a nasty campaign.

Trump's remarks, while appearing to break a taboo against gender stereotypes, energized Democrats.

On Wednesday, Trump's closest Republican rival, U.S. Senator Ted Cruz of Texas, announced that he was choosing Fiorina as his running mate should he win the Republican nomination.

But U.S. Representative Renee Ellmers of North Carolina said she believed Trump could overcome his unpopularity with women voters with straight talk and a plan of action.

"This is an election unlike any other election," Ellmers said. "To me, this is breaking all the rules, this is going against any of the typical history books and elections of the past."

Trump's top aide and other supporters said the focus on Clinton’s gender was part of Trump’s emerging strategy for the general election and that he had no intention of hewing to traditional rules of political campaigns.

“When he is attacked, he will respond,” Trump’s campaign manager Corey Lewandowski told Reuters in an interview. “The campaign is going to proceed under the mantra, which we’ve had in this campaign from Day One, which is: Let Mr. Trump be Mr. Trump.”

A Reuters/Ipsos poll this month showed a big gender gap for Trump. About two-thirds of women have an unfavorable view of the billionaire businessman. By contrast, 54 percent of men had a negative view of Trump - a high number but significantly lower than the negative views among women.

Gearing for a fight

In taking aim at Trump's comments, Clinton appeared to be relishing the fight.

"Well if fighting for women's healthcare and paid family leave and equal pay is playing the woman card, then deal me in," she said in a victory speech in Philadelphia on Tuesday night.

Clinton has in her political career at times benefited from missteps by male candidates. Her 2000 U.S. Senate rival, New York Republican Rick Lazio, came off as a bully when he stepped close to her on stage during a debate to demand she sign a pledge.

Early in her first presidential campaign in 2008, Clinton accused her male opponents of "piling on" and said that would prompt more women to support her. Then-Senator Barack Obama's comments during a presidential debate in New Hampshire that year that she was "likable enough” was seen as a factor in helping her win the state's primary.

If Trump wins the nomination, his willingness to raise Clinton's gender and other issue could make for one of the most contentious general election campaigns in recent history.

"I don't think there's going to be any taboos with Donald Trump," said James Pethokoukis, a scholar with the conservative American Enterprise Institute. "He's not going to treat her with any sort of kid gloves."