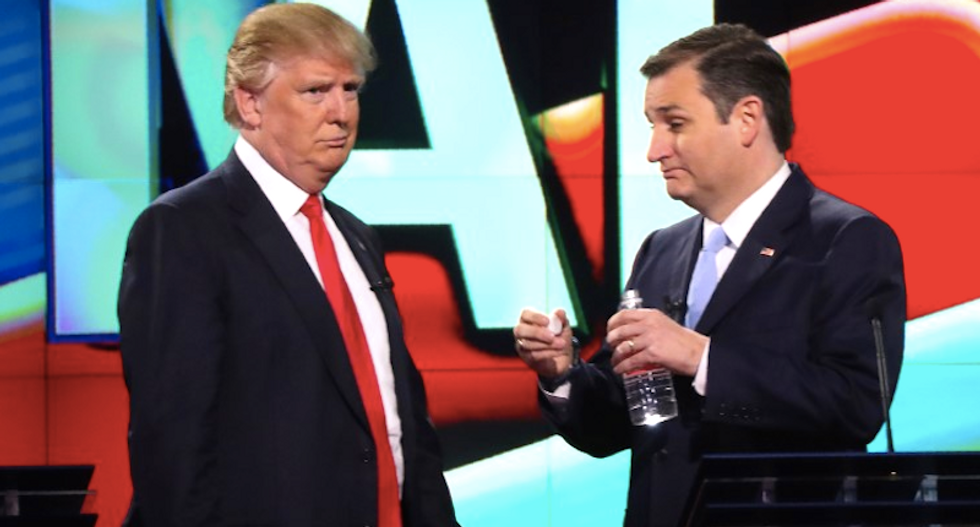 Republican presidential candidates are making an intense push to curry favor with party leaders whose support could prove crucial as the nomination fight enters a critical phase.

Front-runner Donald Trump sent envoys and Ted Cruz and John Kasich appeared at a Republican National Committee meeting on Wednesday at an oceanside resort in Florida where elected party leaders from across the country are holding three days of talks focused mostly on their upcoming presidential convention in Cleveland.

All three contenders are making the case to the RNC members, some of whom are delegates to the Republican National Convention that will choose the nominee, that they have the best chance to emerge as the victor and win the Nov. 8 election.

The meeting comes after Trump, 69, regained the momentum in the Republican race after his crushing defeat of Kasich and Cruz in Tuesday's New York primary. The victory boosted Trump's delegate tally to 845, while Cruz has 559 and Kasich 147, according to the Associated Press.

Republican delegate totals include unbound delegates who are free to support the candidate of their choice.

To become the nominee, a candidate needs 1,237 delegates. Cruz, 45, a U.S. senator from Texas, and Kasich, 63, the Ohio governor, are trying to prevent Trump from winning the nomination outright so they can force a contested convention.

"Ted Cruz is mathematically out of winning the race," Trump tweeted on Wednesday.

But Cruz told a news conference: “What is clear today is that we are headed toward a contested convention."

Kasich said opinion polls showed he was the only Republican candidate who could defeat Democratic front-runner Hillary Clinton.

"My message to the delegates is that I can win," Kasich told reporters on Wednesday night "It's reflected in every poll."

Tensions between Kasich and Cruz erupted at the meeting, as Cruz complained Kasich's insistence on remaining in the race despite having won only Ohio's Republican primary meant he was trying to be a spoiler and end up as Trump's vice president.

Trump's representatives are doing outreach with RNC members who have bristled at Trump's repeated attacks on popular Chairman Reince Priebus and his complaints that the system of awarding delegate in some states is corrupt.

The RNC's rules committee is to meet on Thursday but is not expected to make any recommendations on rules changes governing the July 18-21 convention.

Some anti-Trump forces, alarmed by the New York billionaire's comments on immigration, Muslims and trade, would like to change the rules in a way to make it easier for Cruz, Kasich or an establishment candidate to defeat Trump for the nomination.

But Priebus has said any decisions should be left up to the rules committee that actually governs the convention. Members of that committee have not even been selected yet and they will meet the week before the convention.