Trump trashes Clinton while promising to not become 'boring' 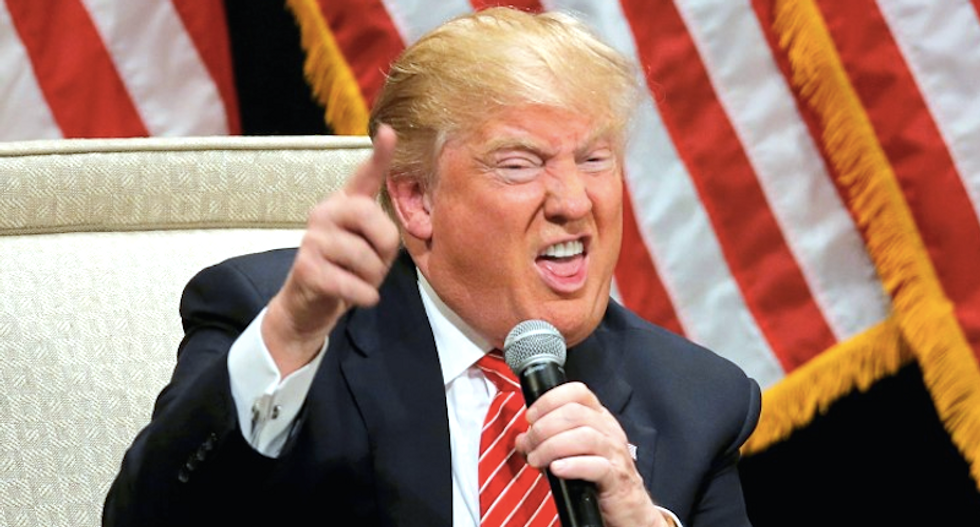 Republican presidential front-runner Donald Trump attacked his top Democratic rival Hillary Clinton on Friday, calling her "crooked," and promised his supporters that he would not bore them by becoming overly presidential.

The comments undercut what his aides had said would be an attempt by the notoriously blunt-speaking Trump to project a more serious image after his win in New York's nominating contest this week, including by rolling out more policy details.

"I can tell you that if I go too presidential, people are going to be very bored," the New York real estate baron told Fox News in an interview that will air on Saturday. He added that he worried his supporters would "fall asleep."

He went on to say that Clinton "is a person who's got many, many flaws" and that she's "the worst possible representative a woman can have," as he shifted his focus away from Republican rivals and toward the Nov. 8 presidential election.

"The only thing she's got going is the women card," Trump said in the excerpts released by the network on Friday. "We call her 'Crooked Hillary' because she's a crooked person. She's always been a crooked person."

Clinton said at a campaign event in Pennsylvania she would not respond to Trump's comments about her.

Donna Hoffman, the head of the political science department at the University of Iowa, said Trump's fiery personality had put him in a bind at this stage of the race.

"The impetus to become more presidential is coming from some of the elite organs of the GOP, but he got to where he is today because of his persona," she said. "To continue this way will keep him alienated from the party, but to change means his supporters will question his authenticity."

In a strong signal that his persona matters, a January survey showed that among Trump's supporters about 43 percent said they liked him because he "speaks his mind," while only 8 percent cited his policies. The survey was conducted by the Working America arm of labor organization AFL-CIO.

Trump's win in his home state of New York on Tuesday bolstered his chances for the Republican presidential nomination, prompting a more serious study of his prospects in the general election.

Trump will give a foreign policy speech on Wednesday at the National Press Club, part of an expanded policy roll-out the campaign is planning, his aides told Republican leaders and lawmakers this week.

The speech will come the day after a round of primary contests in Connecticut, Delaware, Maryland, Pennsylvania and Rhode Island, in which polls show him likely to do well.

But Trump's rivals have said he lacks foreign policy expertise, and several foreign leaders have said they are concerned about the idea of Trump in the White House.

"The mantra that somehow Donald Trump has become the presumptive nominee after New York is ridiculous," Chad Sweet, campaign chairman for Texas Senator Ted Cruz, said on CNN on Friday.

Nationally, Trump has support from nearly half of all Republicans, compared with 28 percent for Cruz and 17 percent for Ohio Governor John Kasich, according to a Reuters/Ipsos poll.

"Now there’s no path to victory for Cruz so he should get out. They should both get out,” Trump told supporters in Harrington, Delaware. "And when they get out ..., we will start on Hillary Clinton like nobody’s ever seen."

Republican National Committee Chairman Reince Priebus said on Friday the party was prepared for numerous scenarios, including a contested convention if no Republican has earned the 1,237 delegates needed to secure the nomination.

Republican National Committee officials gathered in Hollywood, Florida to take stock of the race for the White House and prepare for the possibility of a contested convention in July in Cleveland.

Mexico's new ambassador to the United States, Carlos Sada, vowed on Thursday to combat negative publicity in the U.S. campaign after Trump accused Mexico of sending drug traffickers and rapists into the United States and vowed to build a wall at the border.

Japanese firms said in a Reuters poll released on Wednesday that a Trump presidency would harm security partnerships.

Today, more Americans hope to receive a COVID-19 vaccine than current vaccine supply will allow. Consequently, although President Joe Biden's initial promise to dole out 100 million vaccine doses in 100 days would require a ramp-up in vaccine allocation, some consider the promise to be insufficient to meet current levels of demand and put the pandemic's spread into decline.

The current mismatch between vaccine demand and supply, however, may be short-lived. Despite concerns about lagging vaccine allocation for front-line health care workers and other vulnerable groups, health experts are optimistic that public demand for a COVID-19 vaccine will remain high in coming months as more vaccine doses become available.