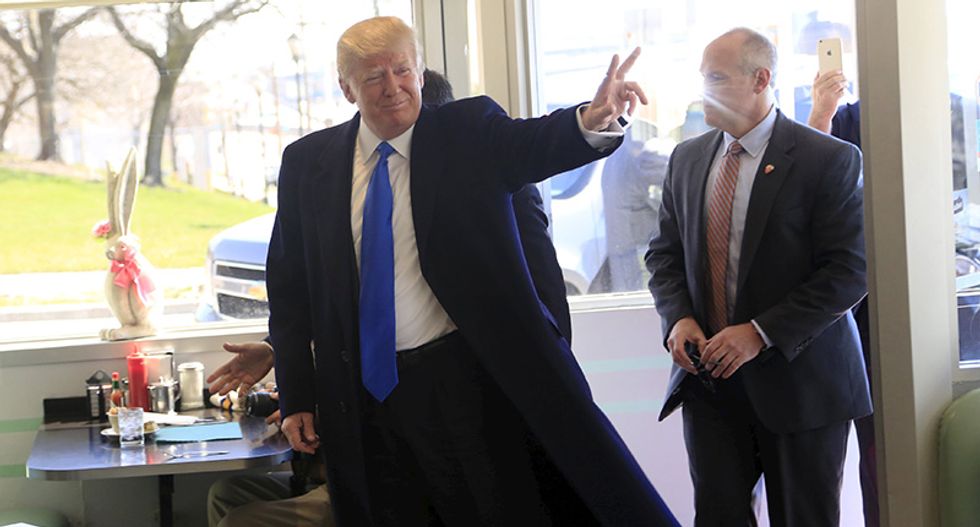 Donald Trump's prediction that the U.S. economy was on the verge of a "very massive recession" hit a wall of skepticism on Sunday from economists who questioned the Republican presidential front-runner's calculations.

In a wide-ranging interview with the Washington Post published on Saturday, the billionaire businessman said a combination of high unemployment and an overvalued stock market had set the stage for another economic slump. He put real unemployment above 20 percent.

"We're not heading for a recession, massive or minor, and the unemployment rate is not 20 percent," said Harm Bandholz, chief U.S. economist at UniCredit Research in New York.

The official unemployment rate has declined to 5 percent from a peak of 10 percent in October 2009, according to government statistics. But a different, broader measure of unemployment that includes people who want to work but have given up searching and those working part-time because they cannot find full-time employment is at 9.8 percent.

Coming off a difficult week on the campaign trail, in which he acknowledged he made a series of missteps, Trump's comments to the Washington Post might be some of his most bearish on the economy and financial markets.

"I think we're sitting on an economic bubble. A financial bubble," he said.

While calling it a bubble might be a stretch, the fall in corporate profits and the recent rally in stock prices has pushed up the market's valuation, and stocks on balance are about 15 percent pricier at the moment than their long-term average valuation.

But a cataclysmic economic downturn originating in the United States appears to be a remote possibility.

"There is a very low probability of a massive recession, less than 10 percent," said Sung Won Sohn, an economics professor at California State University Channel Islands in Camarillo. "If it happens, it would be because of what is happening overseas, especially in China and Europe."

While some economists agreed that the stock market may be overvalued, few saw that as foretelling a recession.

"Nobody can predict what the stock market is going to do," Rajeen Dhawan, director of Economic Forecasting Center at Georgia State University, said. "I cannot predict a stock market crash, so I cannot predict a recession. I don't see any of the reasons for a recession going forward unless there is a huge problem with the market or there is some catastrophic world event which is beyond the scope of economics."

The Democratic National Committee criticized Trump for making his remarks, saying they "undermine our economy."

Trump's success with voters, despite sometimes saying things only to contradict them later, has also alarmed many leading figures within his own party. Some of them are openly plotting to try to prevent him from becoming the nominee at the party's national convention in July.

Reince Priebus, the Republican National Committee chairman, said on Sunday that voters were "afraid" of their economic situation when asked about Trump's remarks on CNN's 'State of the Union' show.

"When people are afraid and when they're angry, sometimes people say things that they regret," he said, apparently referring to Trump's remarks. "The truth is that people are concerned about the future, and every candidate is going to communicate their message differently."

He also played down speculation that party leaders will seek to dislodge Trump by helping someone who is not yet even a declared candidate prevail at the convention, which becomes governed by complicated voting rules if no candidate arrives with a clear majority of votes.

"I think that our candidate is someone who's running," Priebus said, referring to Trump, U.S. Senator Ted Cruz of Texas and Ohio Governor John Kasich. The candidates will next face voters on Tuesday in Wisconsin, where recent polls tend to show Cruz holding a small lead over Trump.