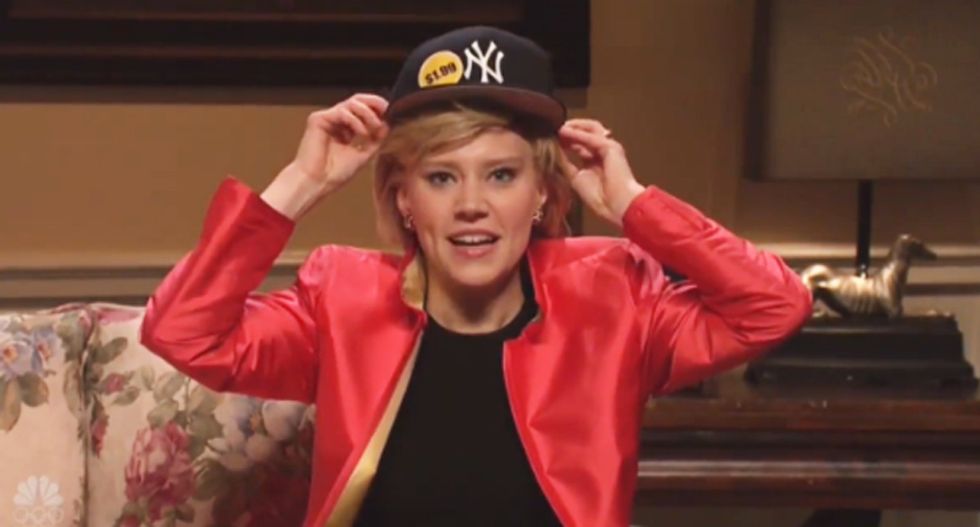 Saturday Night Live's Kate McKinnon took another spin as Hillary Clinton this week, portraying her pandering for votes in New York, taking a shot at Bernie Sanders supporter Susan Sarandon and recreating the candidate's difficulties using a Metrocard to get on the subway.

Acknowledging her recent string of primary losses to Sanders, Clinton explains that she is happy to be back in New York -- or as she calls it: "the Fat Apple."

"God I love being back in the Fat Apple," she explains. "My home state -- except for Illinois and Arkansas -- but they've already voted, so we cool, we cool."

Donning a Yankees hat, she fake noshes on a New York hot dog and street vendor peanuts before flipping the hat around exposing a Mets logo, saying, "Ah. God I love those New York Meets!"

Encouraging voters to turn out for Tuesday's primary -- which is actually a week from this coming Tuesday -- Clinton urges younger voters who are mainly in the Sanders camp to skip voting because, "voting is for nerds. Who cares? Just sleep in."

"To Susan Sarandon who said Trump might be better for America than me," Clinton stated, "Why don't you take Tuesday to go drive off another cliff."

jumping forward to the general election in November, Clinton reminded voters that "I will be the strongest candidate to go up against Donald Trump face-to-face. Or go up against Ted Cruz face-to-whatever you call that up there."