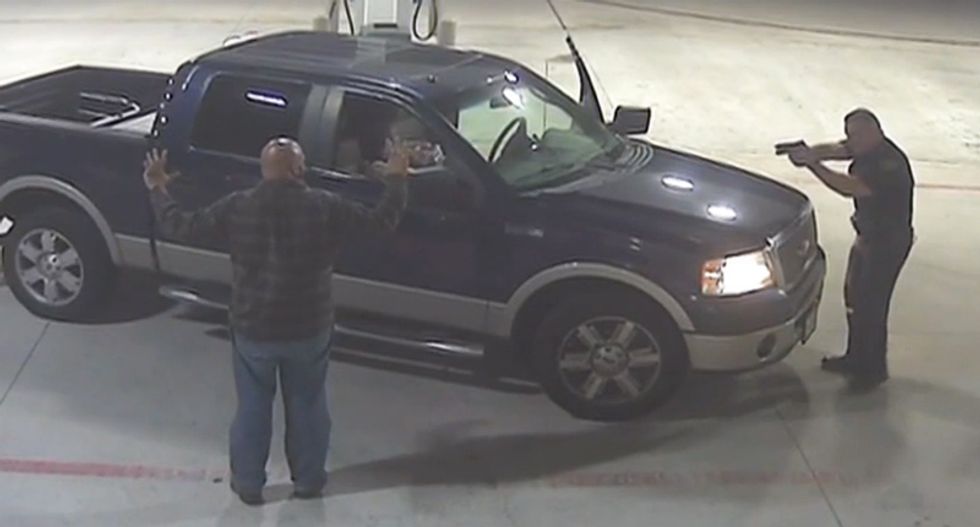 The account of an off-duty Houston cop who arrested a Texas dad in front of his kids -- claiming he pulled a gun on him twice -- is being questioned after surveillance video showed no such thing happened, reports KHOU.

Julian Carmona says he was arrested by Officer William Wright after whipping into a parking space in a convenience store parking lot, nearly side-swiping the cop's truck.

According to Carmona, he was getting out of his car when a gun he carries in the door pocket fell out and he bent over to pick up and return it. When he looked up, Wright was pointing his service weapon at him.

"I don't know if I hit it when I opened the door, or hit it with my foot—everything just happened so fast," explained Carmona.

Seeing the gun pointed at him, Carmona said he immediately apologized.

In those videos Carmona can be seen bending over to pick up his gun as Wright exited his car and pointed his own weapon at Carmona who immediately put his hands up. Carmona is later seen face-down on the ground being handcuffed.

According to Houston man, his two kids were sitting in his car watching the whole thing happen.

"He comes behind me, he starts handcuffing me and my son comes out of the truck. That was the last thing I wanted," Carmona said. "I've never cried so much in my life. It hurts. It hurts."

Carmona says he is still facing the gun charges, but that the video clears him.

“There are two sides to every story, and in this case,” explained Carmona’s attorney Jed Silverman. "It's night and day."

While police investigators are looking into the videos, they are also investigating Wright, with store video showing him buying beer while still in uniform which is against police policy.

Watch the video below via KHOU: