Why is it okay for whites to riot but not okay when Mexicans do it? — OC Weekly’s Gustavo Arellano 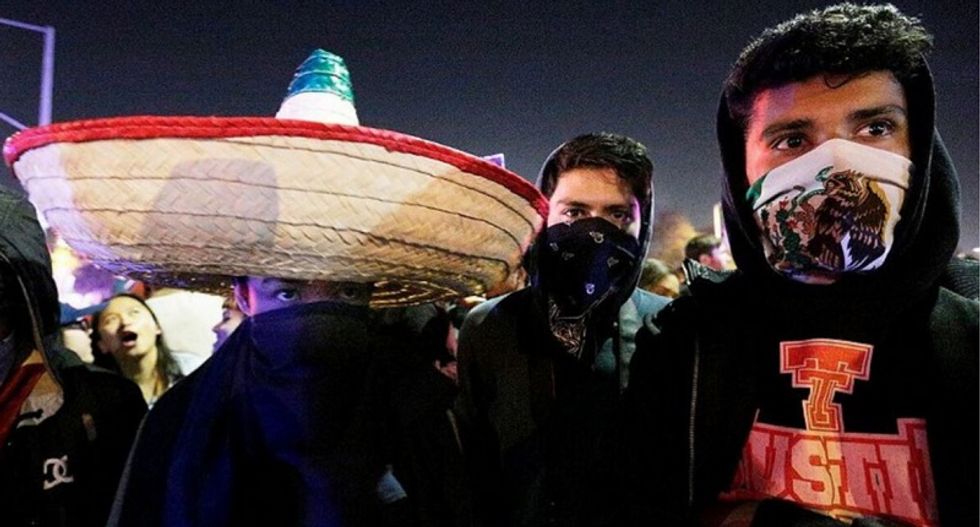 On Thursday night, hundreds of protesters in the Orange County city of Costa Mesa, California, created chaos outside a political rally for GOP front-runner Donald Trump. The region's alternative paper, the OC Weekly, was there to cover it, and its chief editor had some questions about the double standard applied to violence when the people involved are not white.

Gustavo Arellano, OC Weekly editor-in-chief, wrote in an op-ed on Friday, "Worldwide, conservatives and namby-pamby liberals are slamming protestors for waving Mexican flags, for beating up people, for destroying cop cars, and for raising general DESMADRE."

According to the Los Angeles Times, it was indeed desmadre, the Spanish term for chaos. Cars were stomped, rocks were hurled and police vehicles were damaged. By the end of the night, 17 people were arrested on unlawful assembly charges.

"I'm protesting because I want equal rights for everybody, and I want peaceful protest," 19-year-old Daniel Lujan told the Times. But he added, "I knew this was going to happen. It was going to be a riot. He deserves what he gets."

The chaos in California did seem predictable, given the state's large number of Latino residents and Trump's anti-Latino statements that have included calling Mexican immigrants criminals and advocating for a larger wall to be built along the U.S. southern border.

But Arellano pointed out that unlike some predominantly-white mob violence in Orange County in years past, the roiling protest on Thursday night at least came with legitimate cause. If elected, Trump has threatened to deport all undocumented people. And while Arellano doesn't support riots, given Orange County's history, he knows they're inevitable.

"OC Mexican riots at least have more of a legitimate reason—anger against a political apparatus that despises them—than gabacho riots, which usually involve beer or drugs or some other bro excuse for fucking shit up," Arellano writes.

Among those gabacho riots -- gabacho is a Spanish slang term for whites -- he cites the infamous Huntington Beach "surf bro" riots of 2014, when predominantly young white males rioted during the U.S. Open of Surfing. He also cites a 1989 mini-riot at the first OC Pride festival, when a group of Christian homophobes tried to stop the festivities.

"One of my many jobs at this infernal rag is historian, so I know nearly all the official, unofficial, hidden, and lost histories of Orange County, "Arellano notes. "And despite its image as straight-laced, OC has always loved its riots and mass rallies—that is, if gabachos are the major participants. Oh, they get hammered when they're actually happening, but as the years go on, past riots take on a Instagram filter of nostalgia."

And then there's the 30,000-person Ku Klux Klan rally and cross burning near a Mexican citrus camp in Anaheim in 1924.

He then lists incidents of mass chaos or violence involving non-whites, including a 1969 clash between the Black Panthers and Santa Ana police and the 30,000-strong amnesty rallies in Santa Ana in 2006.

"At every single one of these riots and rallies, Mexicans were reviled, slammed, and demonized in the aftermath, and all these events have either been swept under the rug or been slurred over time," Arellano writes. "It's as if every time Mexicans protest, Orange County's guilty conscience wakes up and remembers how terrible it has treated them over the decades—but then their massa side gets mad that the wabs are daring to get uppity, and thus must crush and destroy. It's as if Mexican[s] in la naranja are supposed to take the sliming of their heritage and their relatives quietly, in a county that made Mexican-bashing into a political art."