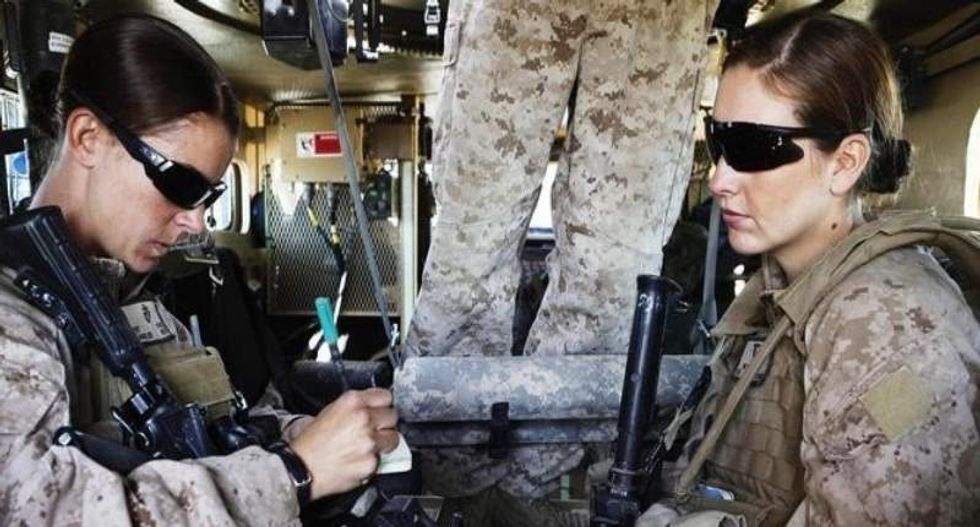 US Marine and Female Engagement Team leader Sgt. Sheena Adams (L) and H.N. Shannon Crowley from First Battalion, Eighth Marines sit in an armoured vehicle before heading out on an operation from their base at Musa Qala in southern Afghanistan's Helmand province on Nov. 13, 2010. (Reuters/Finbarr O'Reilly)

American women could be required to register for the military draft as soon as next year under an amendment to a defense policy bill passed by a House of Representatives committee on Thursday, and supported by some key members of the Senate.

The House Armed Services Committee voted 32-30 to pass an amendment to the $602 billion National Defense Authorization Act, or NDAA, that would require women aged 18-26 to register for the selective service, once all combat roles are open to women.

Defense Secretary Ash Carter announced last year that all combat positions would be open to women, which immediately prompted calls that women should be required to register.

The U.S. military has been an all-volunteer force since the 1970s, but young men have been required to register in case the draft is reactivated.

Republican Representative Duncan Hunter, a former Marine who does not want women drafted and opposes their inclusion in special operations or infantry units, said he introduced the amendment to start a discussion.

He voted against the amendment in the committee, but five other Republicans joined Democrats to pass it.

If it remains in the version of the NDAA passed by the full House and Senate, then men and women aged 18-26 would be required to register for the selective service starting 90 days after the bill is enacted at the beginning of 2017, or 90 days after the Pentagon certifies to Congress that all combat specialties are open to women.

The military is currently working toward that certification.

The idea of the draft received some key endorsements in the Senate. Two women members of the Senate Armed Services Committee, Democrat Claire McCaskill and Republican Joni Ernst both said they favored registration for women. Ernst is the first female U.S. military veteran to serve in the Senate.

"It seems to me that if they are taking on a combat role that that also means they would be eligible for registration," he told reporters. McCain added that his tendency would be go along with the view of the women on his committee, who "have a better insight than I do."

The full House is due to vote in May on the NDAA, which is considered a must-pass piece of annual legislation. The Senate will consider it later in the year.