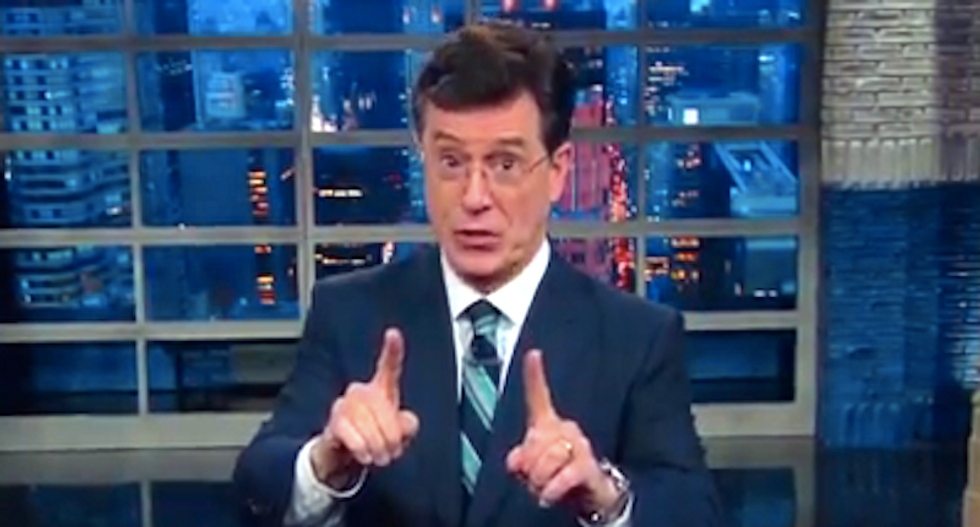 The "Late Show" host wondered why public restrooms even existed, pointing out that his bathrooms at home had only one toilet each.

"When I am forced to use a public bathroom -- which is infrequently, thank God -- I go in there with blinders on," Colbert said. "I don't know who's next to me. It could be a centaur next to me, for all I know. I don't even like to look at myself in the mirror afterwards. I know what I did. I'm there for a surgical strike -- get in, get out, minimal casualties."

He said a more reasonable restroom-related law would ban chit-chat.

"I'm not there to make friends," Colbert said. "If we've just come out of a movie and you're standing next to me, I don't want to talk about how irreplaceable Robert Downey Jr. is as Iron Man. I don't care if you're Robert Downey Jr. yourself."

"Second, if you're a fan of mine -- that's wonderful," he continued. "Please don't try to shake my hand in there. Because I know what you just shook. Also, if there are a bunch of open stalls, don't take the one next to me. It's not the buddy system."

Colbert then offered a special message to GOP lawmakers who wanted to legislate the private business of using a public restroom.

"To all those lawmakers out there who are so obsessed with who's using what bathroom and what plumbing they've got downtown -- newsflash: You're the weirdos," Colbert said.