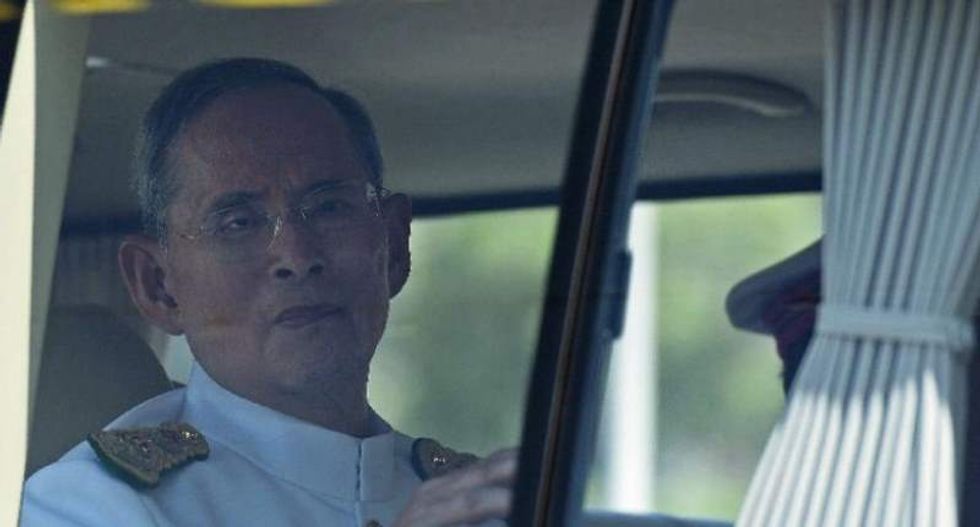 The king, 88, is the object of an intense personality cult and his frail health is a subject of significant public concern.

The wheelchair bound monarch has spent most of the past two years hospitalised for a series of ailments, with very few public appearances and speeches.

"It was detected that his facial muscles had irregular movements and the doctor conducted a computer x-ray and found there was an irregular surplus of fluid in the backbone and brain," the statement said.

"The team of royal physicians corrected this by adjusting the tube in his abdomen between 6:30 pm to 7:45 pm (Friday) and the result was satisfactory," the statement added.

It is the second health update issued by the palace in under a week. Last Saturday the palace said Bhumibol had been treated with antibiotics for a lung infection and knee inflammation.

Previous health updates have also mentioned a build up of fluid in his spine or brain.

Bhumibol is the world's longest-reigning monarch and most Thais have never known life under another king.

Anxiety over what will happen after his reign comes to an end is considered an aggravating factor in the country's past decade of tumultuous politics as competing elites jostle for power and influence ahead of the transition.

Bhumibol last left Bangkok's Siriraj hospital in early January for an hour-long trip by car to visit his palace and other royal projects, according to officials.

He was last seen in an official photograph distributed in mid-December.

The kingdom has one of the world's strictest lese majeste laws, punishing any criticism of the monarchy with up to 15 years in prison.

Use of the law has skyrocketed ever since royalist army generals seized power in a May 2014 coup with scores arrested and jailed, some for as long as 30 years.