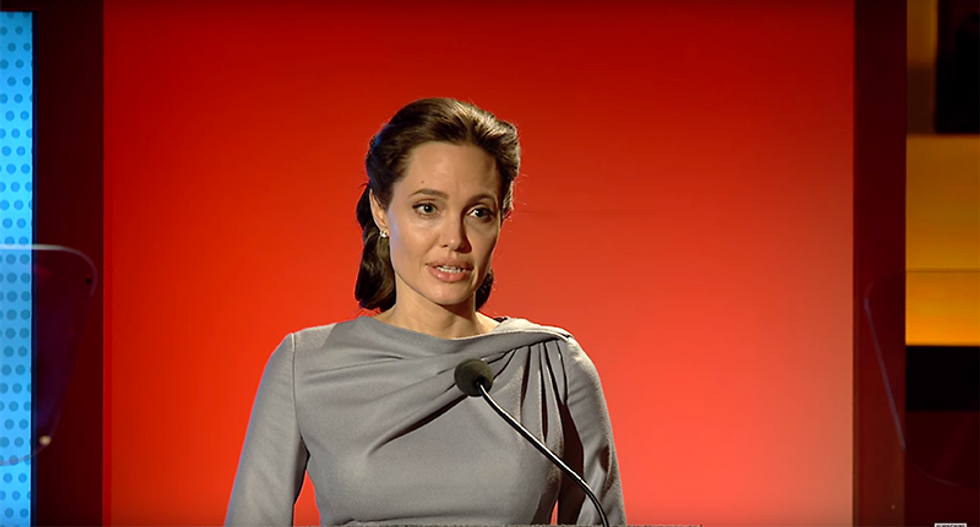 A-Listers in Hollywood are lining up against the GOP's presumptive nominee, Donald Trump. George Clooney called Trump a xenophobic fascist and Jennifer Lawrence told British comedian Graham Norton she wants to meet Donald Trump so she can say "f*ck you" to him. Now Angelina Jolie is revealing how disgusted she is by Trump, saying his provocative comments and controversial policies like banning Muslims are against the values on which America is built.

The United Nations Refugee Agency special envoy spoke at a BBC event in London Monday, where she made a passionate plea about Syrian migrant crisis and the refugees who have been displaced because of the conflict. In the conversation with BBC reporter Mishal Husain, Jolie was asked if her disappointment with American policymakers who, Jolie feels, have not done enough, also extends to Trump.

Jolie shook her head in seeming frustration and disgust. “To me, America is built on people from around the world coming together for freedoms, especially freedom of religion. So it’s hard to hear this is coming from someone who is pressing to be an American president,” Jolie, 40, said.

Her comments in the UK come on the same day an interview with Trump aired, where Trump admitted he is "unlikely" to have a good relationship with British Prime Minister David Cameron. Both he and London Mayor Sadiq Khan have been critical of Trump's pledge to ban Muslims from entering into the United States.

See the clip of the Q&A below:

This is the full speech Jolie gave on the migrant crisis courtsey of the BBC: