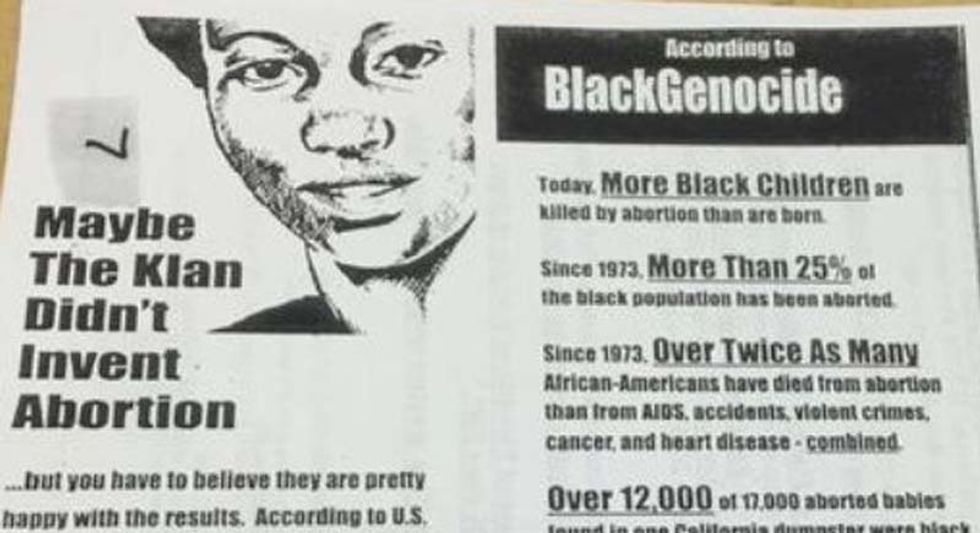 A Catholic school teacher in Phoenix is under fire with students and alumni calling for his firing for passing about a "black genocide" flyer to his students that compares Planned Parenthood to the KKK.

According to AzCentral, Gavin Ahern handed out a flier at the all-girls Xavier College Prep reading, "Maybe the Klan didn't invent abortion ... but you have to think that they're pretty happy with the result."

Opposite that, the page iis headed, "Black genocide," followed by a list of statistics documenting African-American abortion rates.

According to an alumna of school, the theology teacher who has worked at the school since 2002, is out of line.

"It doesn't debate theology in a respectful way," Peg Perl said. "I do care about the school, and I believe this incident is an outlier. It doesn't fit with its reputation at all."

Perl, who lives in Colorado, started up a petition calling for Ahern's dismissal that has garnered a whopping 7,300 signatures. According to Perl, local parents of students at the school will be submitting the petition to school authorities.

The petition also includes comments from other school alumni saying this isn't the first time Ahern has  indulged in misogynistic rhetoric.

In an interview with Jezebel, the mother of one student who wished to remain anonymous, said complaints to the school about Ahern have fallen on deaf ears.

“This really isn’t an issue about abortion, rather a lack of accountability and integrity when teaching," she explained. "We made the choice to send our daughter to an all girls Catholic school knowing that they have a pro-life position. But propaganda that demeans a particular race and likens Planned Parenthood to the Klan is a problem.”

Ahern is not without his defenders, including two juniors at the school who created their own petition, saying Ahern didn't make the flier -- he just passed it out to students.

"The purpose of this exercise [the flier] was to expose the students to unpopular and unacceptable views from the past," the petition -- which has over 1,000 signatures -- states. "Mr. Ahern has never been racist in class and actually has a very large understanding and big heart toward multiple views and opinions."

According to the school administrators, they are backing the teacher at this time.

"Xavier will not allow the threat of controversy to intimidate our teachers, counselors, and administrators from discussing these important controversial issues, nor silence us in our duty to impart the values of our faith to the young women entrusted to our care." a statement from the school read.

Another alumna -- Christina Lambard, class of 1993  -- wasn't having it, writing, "This is about a teacher using his position of authority to spread misogynistic and racist ideas to young women. And for the school to hide behind the idea that these are church beliefs and that it’s about promoting discussion, that’s not at all what we’re trying to bring up. We do not support teachers using position of authority to spread propaganda that is not fixed in theology.”