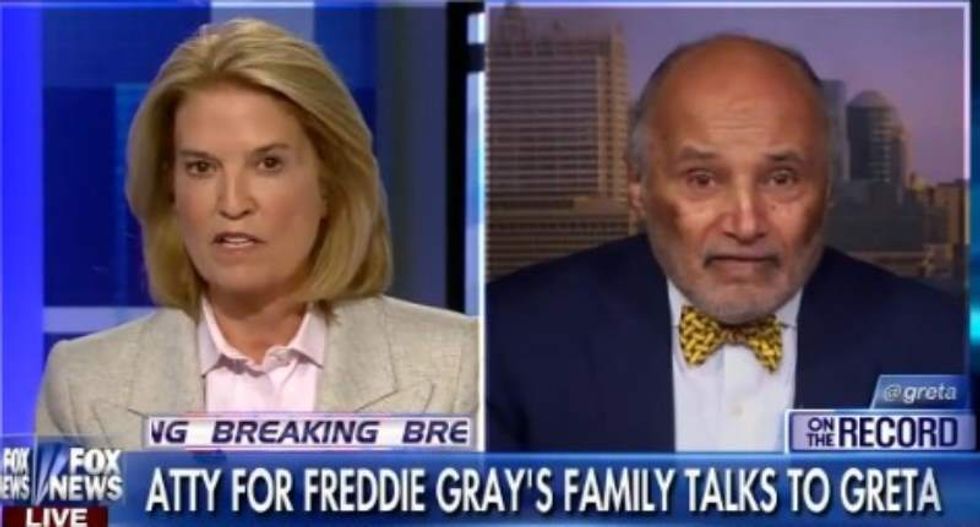 "If I think that the whole network's approach to the black community is racist and that's a relevant thing to say during this program, I can't say it?" Murphy asked Van Susteren at one point.

"We were in court every single day," she replied. "Look, I know you very well. I know the way you're trying to play this; I got the picture. I wasn't born yesterday. I got that. But if you have a problem with my show, tell me."

"I haven't stated a problem with your show, if you listen carefully to me," Murphy shot back, just before she ended the discussion.

Murphy's pointed remarks toward the conservative network came hours after Officer Edward Nero was found not guilty in connection with Gray's death in Baltimore last year, which spurred numerous protests around the city.

Murphy said that Gray's family was "not overwrought" regarding the decision, and had faith in Judge Barry Williams' decision.

"We're blessed not to have someone who's going to be influenced by public opinion," he told Van Susteren, adding, "Your station was rife with speculation about whether Judge Williams was playing to the audience."

While Van Susteren had reporters at the trial, other shows on her network have covered the aftermath of Gray's death by blaming it on drugs; allowing an anonymous police officer to call him a "snitch;" and attempting to shame residents.

During one live broadcast, Van Susteren's colleague Shepard Smith chastised the hosts of The Five for their coverage, accusing them of trying to "indict" local parents.

Watch footage from the interview, as posted online on Monday, below.