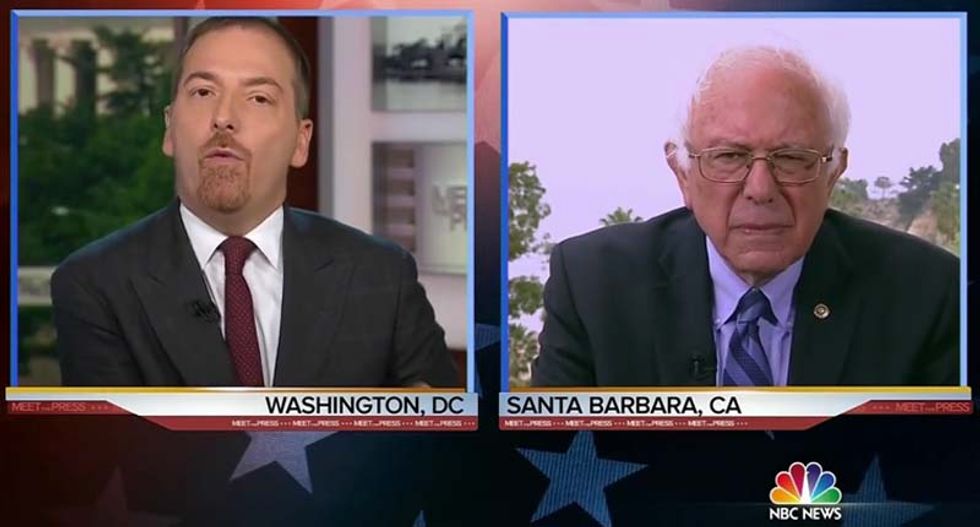 In an interview coming a week before the critical California primary, NBC host Chuck Todd accused Vermont Sen. Bernie Sanders of being "a little bit hypocritical" over his approach to Democratic superdelegates.

Appearing on Meet The Press, Sanders claimed he has three paths to victory and that he would like to head to Philadelphia with more pledged delegates than rival Hillary Clinton but admitted he needed some of the superdelegates pledged to her to put him over the top.

Noting states in which he won "landlside victories," Sanders said he would tell superdelegates from those states, "Do what the people in your state want. They voted for Bernie Sanders, you as the superdelegates should follow their wishes."

"We're going to make the case for the superdelegates," Sanders explained. "'Your job is to make sure that Trump is defeated, that Bernie Sanders, in fact, for a variety of reasons, not just polling, is the strongest candidate.'"

Todd stopped Sanders by pointing out the hypocrisy of also appealing to superdelgates from states Clinton won to switch their votes.

"You're saying you want them to respect the vote in their state, then at the same time, you say, 'But oh, by the way, for those of you that are a superdelegate in a state that Clinton won, why don't you think about the general election?' It's a little bit hypocritical to be on both sides of those issues," Todd said.

"No, no, no, that's not what I'm saying," Sanders argued, adding that superdelegates have a "grave responsibility" to make sure Donald Trump doesn't become president.