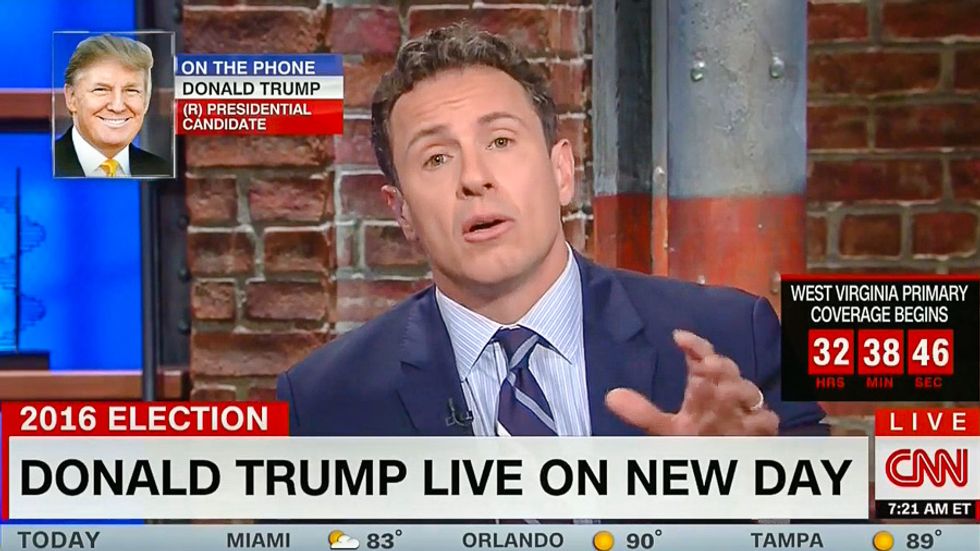 After Donald Trump melted down on CNN over criticism of his tax plan on Monday, host Chris Cuomo tried to placate the candidate by promising him more interviews via telephone.

Over the weekend, critics pounced on Trump for changing positions after he suggested that he would likely raise taxes on the rich, and that he supported a minimum wage hike.

Cuomo pressed Trump about his tax plan on Monday, sending the billionaire into a tantrum about his critics.

"If I increase it on the wealthy, that means that they're still going to be paying less than they're paying now," Trump insisted. "I'm talking about increasing from my tax proposal."

"[NBC host] Chuck Todd understands that totally and yet they released information like I'm looking to increase the taxes," the presumptive GOP nominee complained. "So, it was totally misrepresented just now by you."

"Whoa, whoa, whoa," Cuomo interrupted. "I totally understand, but when something is reported a certain way and I ask you about it and give you the opportunity to correct it, that's not me misrepresenting, that's giving you the opportunity you want, which is to tell the audience what you say the truth is."

"You know, it was reported in the failing New York Times and other places that I want to default on debt," Trump grumbled. "You know, I'm the king of debt. I understand debt better than probably anybody. I know how to deal with debt. You know, I love debt. But it's dangerous and it's tricky."

"They print it out wrong purposefully," he added.

"It's good of you to accept these opportunities," Cuomo replied, noting that Trump's handlers were signaling that the current interview was over. "It's important for the people to hear these distinctions in what's reported vs. what you say is on the table."

"There's so much misreporting," Trump griped. "It's unbelievably dishonest."

"And that's why we ask you to come on," Cuomo assured the candidate. "Don't worry, there are going to be a lot of talking heads say a lot of different things."

"Some day you'll put good people on about Trump, one of these days," the candidate droned on.

"What I want is to have you on," Cuomo said. "That's why I offer you these opportunities, not to be unfair, to be fair and to give you the chance to correct what you say others get wrong."

"Thank you for being here today. Your team is saying you've got to get going," the CNN host continued. "But I appreciate the time on New Day. I want to talk to you, not about you."