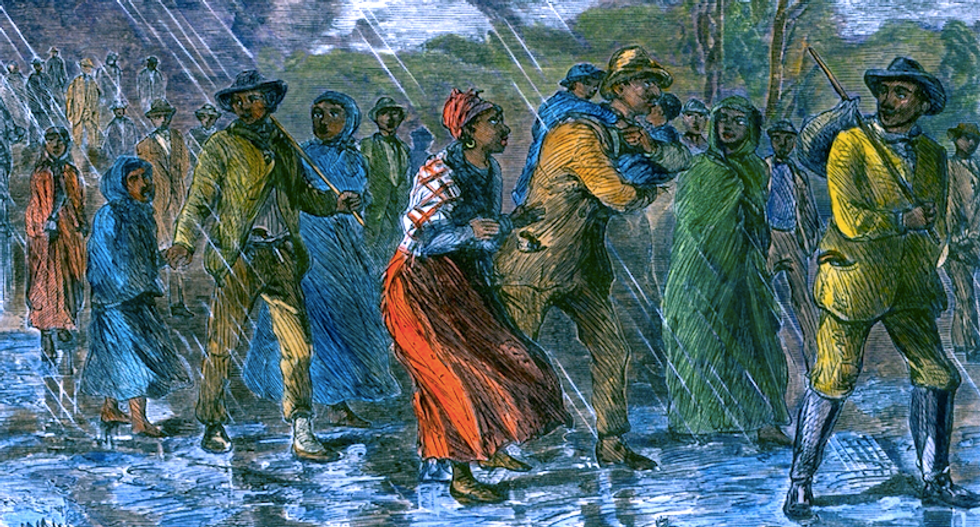 Among the millions of people enslaved in the United States before 1865, hundreds of thousands attempted to flee from those who held them in bondage.

Some left temporarily to protest mistreatment. Others sought to reunite with loved ones from whom they had been forced apart. Many simply wanted freedom.

These fugitives from American slavery often left no trace in the historical record, but we can document the flight of many of them. After all, to their white owners, enslaved people were valuable property – well worth the time, effort and resources devoted to their capture. The method most likely to produce results was enlisting other white people in the search by publicly offering a reward.

Open practically any issue of any southern newspaper from the decades before the Civil War and you’ll see advertisements placed by slaveholders searching for runaway slaves. Perhaps as many as 200,000 of these notices appeared in the public prints of the South. Each attaches a name and a story to a fugitive; however, they’d never been gathered together in one easily accessible place.

So in 2014, a team of scholars led by Edward Baptist of Cornell University, Mary Niall Mitchell of the University of New Orleans and me began a collaborative project called Freedom on the Move to collect and digitize these ads. Now, with every one of the names and stories in them available to and searchable by scholars and the general public, we hope to understand, in new ways, the lives and experiences of those who resisted slavery by trying to liberate themselves.

A window into a life

Runaway advertisements were essentially wanted posters for people whose crime was pursuing their own freedom, and slaveholders provided as much detail about those people as possible in order to maximize the chances for recapture.

An advertisement might include a fugitive’s name, age, height, build and skin color. But it could also note specialized skills (“a brick-layer by trade”), languages spoken, distinctive physical markings, and signs of work injuries or torture (“the end of the forefinger of the left hand has been cut off”). Some might note the way a person carried him- or herself (“when walking inclines to lean forward”). A slaveholder could provide details about what a fugitive was wearing when he or she fled, indicate whether he or she could read and write, or speculate about an escaped person’s potential destination.

While slaveholders designed runaway advertisements to put the surveillance efforts of the state and the broader white populace at their disposal, they also unwittingly provided windows into the lives of the men, women and children who were desperately trying to free themselves from bondage and forge their own destinies.

The power of a digitization

By amassing all of these advertisements under the umbrella of one database, we’ll be able to digitally analyze thousands of them at the same time. This has the potential to open avenues for researchers to make discoveries that might have otherwise been impossible. 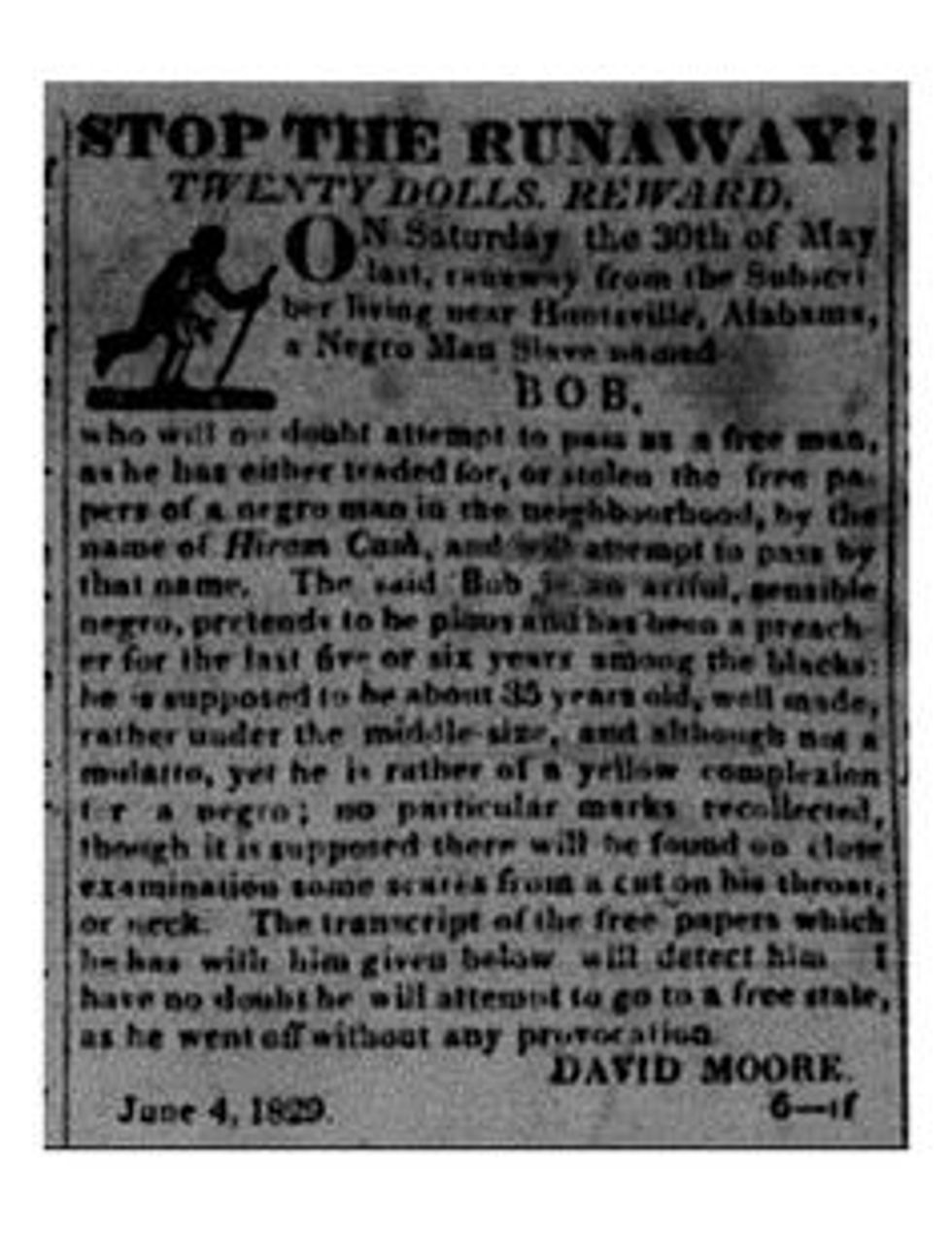 An ad for a fugitive slave named Bob from June 1829.

For example, we could map the places slaves fled from and where their owners imagined they might try to end up, allowing us to visualize a new landscape of movement. We can document changing patterns of flight over time, and across multiple geographies.

We can also create detailed demographic profiles of those who fled, and gain insight into strategies deployed by fugitives as they tried to ensure they would not be caught. How often, for example, did enslaved people steal free papers and attempt to travel under an assumed name, as a man named Bob, who lived near Huntsville, Alabama, did in 1829? How many people were there like Harry, who fled in 1832 from a farm near Jackson, Mississippi, and whose owner was certain he would not only claim to be free but would “dress in and pass as a woman, so as not to be apprehended”?

Indeed, we imagine that for most users of Freedom on the Move, the individual stories of fugitives from slavery will linger longest. 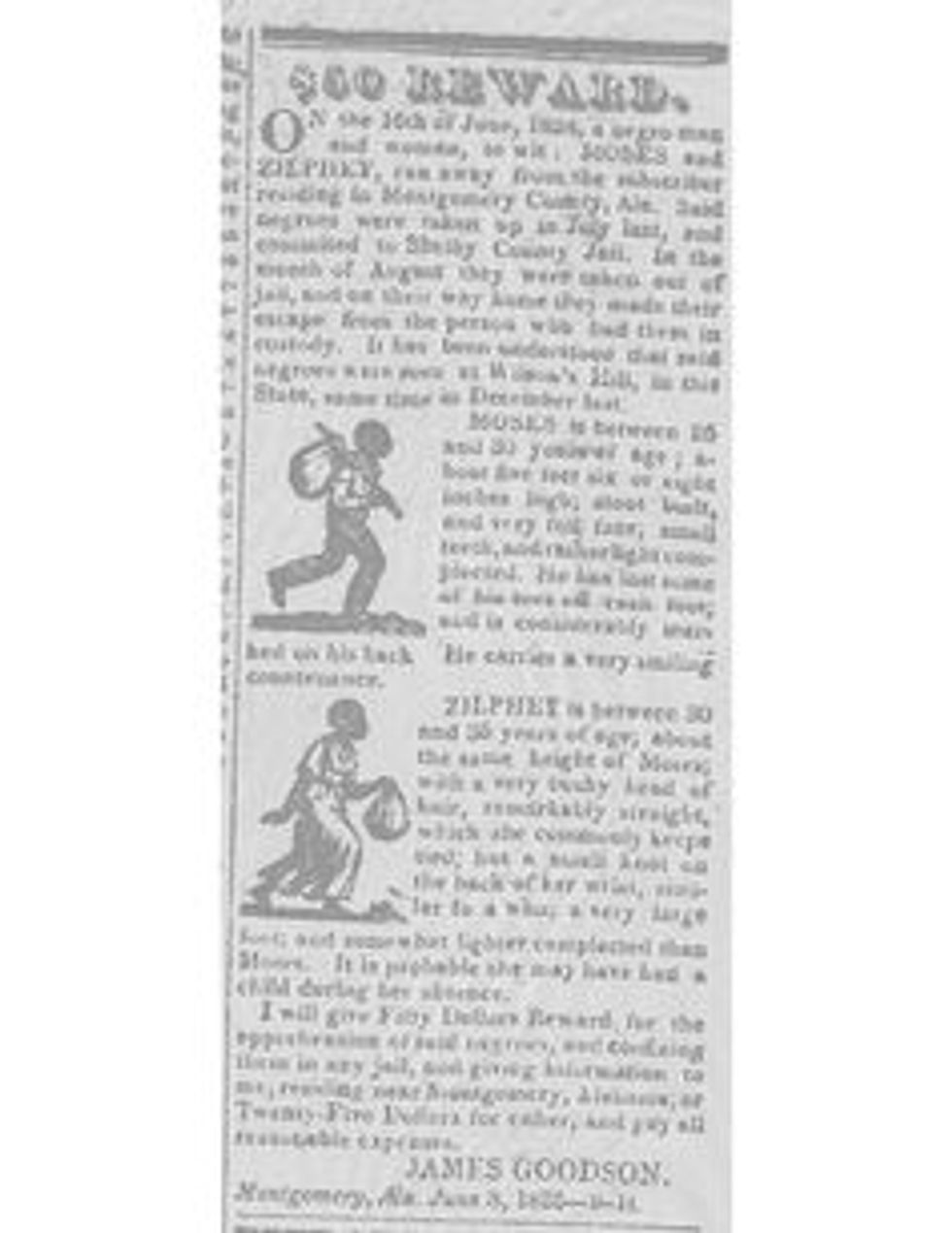 James Goodson placed an ad for for runaways Moses and Zilphey in June 1825.

It takes little imagination to see the horrors they’d experienced, the risks they were willing to take to escape them and the complications of family ties those risks entailed.

Consider the journey of fugitives Moses and Zilphey, who were probably a married couple and were sought by James Goodson of Montgomery, Alabama, in June 1825. In the advertisement he placed in the paper offering US$50 for their capture, Goodson explained that Moses and Zilphey had first fled from him a year earlier and had made it more than 75 miles north before they were caught and put in the Shelby County jail. Goodson had sent someone to take them into custody and return them, only to have the couple escape from that person. By the time Goodson put out his advertisement, the two had been at large for nearly 10 months – no easy feat, considering they needed to endure the winter, and Moses walked despite having “lost some of his toes off each foot.” Zilphey, meanwhile, likely faced an even more difficult challenge: Goodson wrote “she may have had a child during her absence.”

And take the story of Charles, a 30-year-old man who fled from Joseph Gray near Huntsville, Alabama, in March 1827. In his advertisement, Gray explained that Charles had been brought to Alabama from Virginia, and that this was the second time he’d run away. Gray reported that Charles had made it as far as Nashville on that first occasion; he’d been caught with a white man who was pretending to own him in order to provide cover. Now Gray suspected that Charles “may be playing that same game over.” We don’t know whether or not Charles succeeded in escaping. But with Gray’s mention that Charles had a “back much marked by the whip,” we can guess that he had plenty of incentive to keep trying.

Treated as villains and criminals, in truth enslaved people such as Moses, Zilphey and Charles engaged in heroic efforts to free themselves. Freedom on the Move promises to return their stories, and those of tens of thousands of others, back in the public consciousness where they belong.