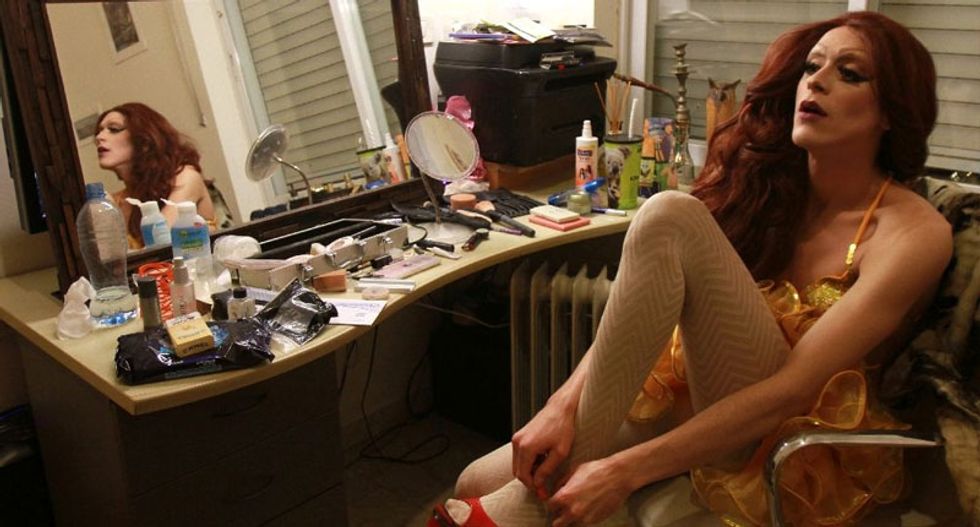 In conservative Jerusalem, the last thing you might expect to find in the cramped back of a bar is a clutch of amateur drag queens railing against political and religious taboos.

But there they are, balancing on needle-like high heels and heavily made up, spouting unholy views in the holiest of cities, a place revered by three of the world's major religions.

Anything goes with "Allah Nash", a group whose name plays upon the Hebrew for cross-dressing and the Arabic for God.

Fair game abounds, from laughing at the Israeli army and the Palestinians, mocking Jewish prayers and the sexual practices of the ultra-Orthodox, even impersonating Jewish American gay icon Barbra Streisand but with a yellow star pinned on her dress, recalling the evils of Nazism.

Yossale is our hostess for the evening. The young man in blonde wig, short sparkly dress and legs that go on forever singles out a member of the audience.

"He's cute enough to be introduced to the rabbi!"

The "Video" is now the only gay bar in town, just a few hundred metres (yards) from the walls of the Old City that shelter Christianity's Church of the Holy Sepulchre, Islam's Al-Aqsa Mosque compound and Judaism's Western Wall.

Some 30 people, both local and just passing through, are in the audience this night for the musical show that Allah Nash has put on for two years now.

The regularity of their performances depends on both availability and motivation of the artists in a city where religious and social inhibitions are widespread.

At a previous show, two high-kicking drag queens in uniform hosed spectators with plastic machineguns as martial music played in the background.

"I love very black humour and seeing the appalled looks on people's faces as they wonder how far we will go," says Fatma, who is actually a curvaceous 23-year-old apprentice comedian called Michael.

"I love to generate political and religious tension on stage. We have to do something funny, we have no choice -- either we laugh or we cry."

"I'm also an extremist in a city that's full of them. Above all else, I adore toying with people's moral boundaries."

He grew up in Jerusalem in one of the strictest of Jewish religious backgrounds -- the Lithuanian branch of the Ashkenazi ultra-Orthodox, who wear long kaftans and fur hats -- but never felt religious.

Yossale was also raised in an Orthodox Jewish household, but after coming out the two young men cut ties with both their religion and relatives.

As for the third member of this band of sisters, taking such a step would be unthinkable.

Supernova is an Arab Israeli currently doing his national service at a base near the Palestinian political capital of Ramallah in the occupied West Bank.

A clinging ballgown shows off his muscular physique to perfection.

But the mere thought of a family member or military commander finding out that he's a homosexual haunts Supernova.

Under one satin glove lurks an engagement ring, a constant reminder that he will soon be married off to a young Muslim woman from the same community.

Israel is considered to be a pioneer in both promoting and respecting gay rights, including adoption for same-sex couples and preventing discrimination.

Its commercial capital Tel Aviv hosts a flourishing gay scene, a fact the government never misses a chance to point out.

But just 40 kilometres (25 miles) away in Jerusalem, homosexuals live another life altogether.

Cross-dressers in the ancient city used to have another hangout in the early 2000s in the form of the Shushan, another magnet for gays.

However, it was burned down in an arson attack in 2005 and is now no more.

And in July last year, ultra-Orthodox Jew Yishai Schlissel waded into a Gay Pride parade in Jerusalem with a knife and stabbed a 16-year-old girl to death.

Last month he was convicted of murder and six counts of attempted murder.

Despite the threats a drag queen may expect to face on the streets of Jerusalem, Yossi is undeterred as he leaves the bar with Yossale after the show.

He's wearing a faux leopard-skin coat above his mini-skirt.

"So what's the worst that can happen? The taxi driver makes a pass at me?" Yossi laughs.