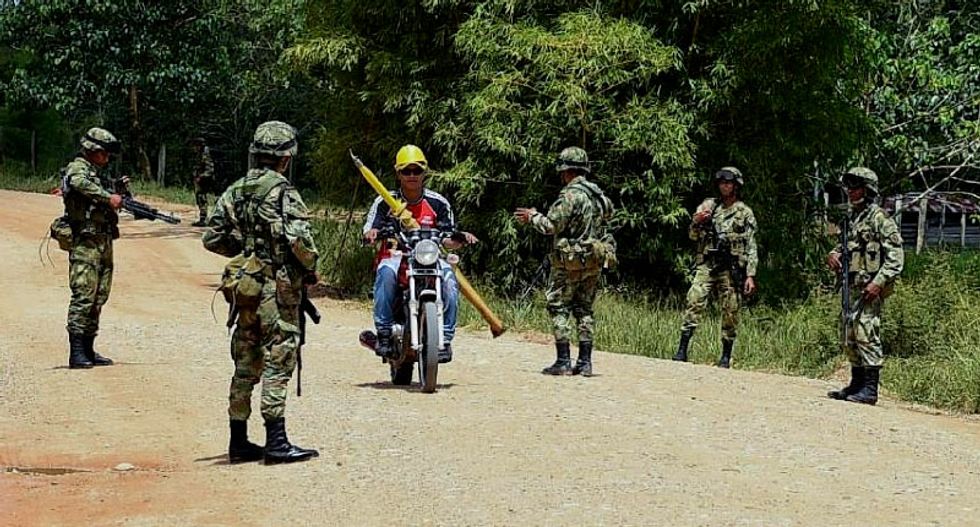 Colombian soldiers patrol in the department of Caqueta, FARC fiefdom located between the Andes range and the Amazonian rainforest in Colombia in November 2014 (AFP Photo/Luis Acosta)

“You know, sometimes it’ll be three in the morning, and I’ll be hanging with some very bad people doing coke, and I’ll wonder, where does this shit come from?” Martin, a friend of mine in Philadelphia, pondered aloud after I had told him about my work with coca producing communities in Colombia.

When the War on Drugs has wrought so much destruction in poor communities in the US, the troubles of Latin American farmers may seem worlds away to the ordinary user or small-time dealer in this country. But a look into the lives of farmers of coca (the plant source of cocaine) and marijuana reveals several things in common with poor and working class drug users in North America.

Both groups are casualties of the US drug war. Both have been repressed by draconian laws, socially maligned, and pushed into an exploitative commodity chain by policies that have taken away economic safety nets for poor and working families, and destroyed local communities. As the US considers reforms such as the legalization of marijuana, understanding the impact of US drug policy on South American farmers is more important than ever if we’re serious about undoing the damage.

US-led drug crop eradication efforts in Latin America intensified over a number of decades. When President Nixondeclared his War on Drugs in the 1970s, he also authorized, with the cooperation of the Colombian government, the first aerial spraying of glyphosate-based pesticides on marijuana plots on Colombia’s northern coast.

As mandatory minimum sentencing laws swelled prison populations in the US during the Reagan and Clinton administrations, supply-side policies in South America increasingly turned from alternative development to forced eradications of illicit coca and marijuana. In 2000, the US and Colombian governments implemented Plan Colombia—a set of policies that, among other things, authorized widespread aerial spraying of large plots of drug crops. Until Colombia suspended the operations last year, after the WHO declared glyphosate a probable carcinogen, it was the only country in the world that allowed aerially sprayed herbicides as a drug control strategy.

These policies have harmed local populations in a number of ways. In addition to damaging legal food crops such as bananas and yucca (manioc) that farmers depend on for their livelihood, the glyphosate also killed healthy plants in the natural environment, damaging the ecosystem. It also caused health and fertility problems for many poor families.

Plan Colombia also exacerbated the social and political marginalization of small-scale farmers. The policy was premised on the fusion of the US War on Drugs with Colombia’s war on the FARC guerrilla group. Because of this, drug traffickers were conflated with FARC insurgents under the misleading term “narcoguerrilla.” Small-scale farmers who cultivated drug crops were swept up in this rhetoric as well.

As crop producers, these farmers have been an exploited class, distinct from both drug traffickers and guerrilla insurgents. The idea that they make a fortune from drug crops is entirely false: While they are more profitable than other crops, Colombian farmers still earn less than 2 percent of the final street price per pound of the drugs they produce. Most are not supporters of FARC. Yet their proximity to drug trafficking has led them to be categorized as insurgent or insurgent sympathizers, and treated as such.

Farming communities became  victims of military repression, including threats, harassment, and even killing by the Colombian military. While such human rights violations continue today, media attention to the issue peaked with the exposure of the false positives scandal under former President Uribe (2002-2010). Meanwhile in the US, poor communities of color struggling with addiction and victimized by the drug war have been further maligned through discourses characterizing them as “super predators,” “crack moms” and so on.

For poor communities at both ends of the drug commodity chain, the drug economy has provided a path for meager social mobility. Neoliberal policies in the US—such as Temporary Assistance to Needy Families (1997) and the elimination of general assistance (GA) in several states—increasingly cut away social safety nets for poor families, while structural adjustment and free trade saw legal cash crop prices in Latin America tumble. In Colombia, many farmers migrated to poor neighborhoods in nearby cities, often populated by internally displaced people fleeing from the war in the countryside. This often meant moving out of the frying pan of Colombia’s rural conflict into the fire of urban poverty and violence; for those unwilling or unable to take that chance, growing coca or marijuana became the best alternative option.

Read more from The Influence:

In Nunatsiavut in Northern Canada, a Community Faces the Mental Health Impact of Climate Change

Neuroscientist: Meth Is Virtually Identical to Adderall—This Is How I Found Out

In the North as well as the South, the drug economy became the social safety net that neoliberal policies took away. Coca and marijuana crops and sales became the most profitable agricultural alternative in a world of few economic options. The unregulated nature of this market, made more volatile by government crackdowns, has led to violent competition between drug gangs for market control—adding to the problems faced by these communities.

Solving the problem requires the creation of sustainable economic options for the most vulnerable communities at both ends of the commodity chain. Many small-scale farmers in Latin America are eager for a new drug policy regime that would lift the repression and stigma that the War on Drugs has inflicted on their communities. However, for many small-time dealers in the US, marijuana legalization means a drop in prices or competition with licensed vendors, removing what has become a desperate economic safety net. Many communities are being excluded from opportunities in the legal marijuana market. These exclusions will inevitably lead to even worse living conditions and still more desperate economic measures.

To protect Latin American farming communities from such undesirable consequences, international drug policy reform must include agrarian policy reform that enables farmers to safely continue producing, for fair prices, both food and drugs for the world. Similarly, US policies must re-tether health and social welfare safety nets for US families struggling with poverty and addiction. Otherwise, legalization may create more problems for these communities than it solves.