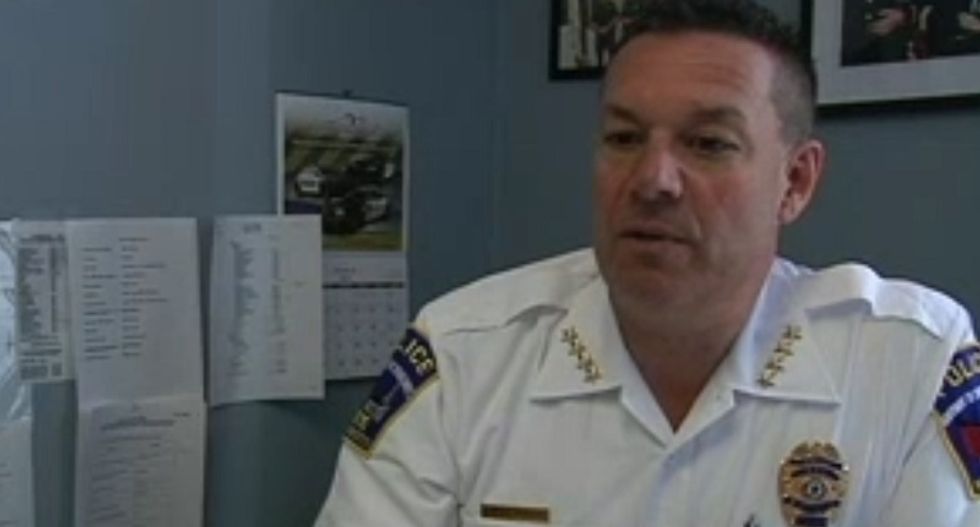 A Massachusetts police chief who vocally supports GOP front-runner Donald Trump has been sentenced to two years and three months in prison for extortion, the Berkshire Eagle reports.

Former Lee Police Chief Joseph Buffis was convicted of forcing a Lee couple to make a bogus $4,000 donation to a toy charity, in exchange for dropping criminal charges against them. The couple was accused of prostitution, and Buffis is accused of pocketing the money instead of turning it over to the charity, according to Time Warner Cable News.

"It was corrupt behavior," U.S. District Court Judge Mark Mastroianni said. "It's deeply, deeply offending to the criminal justice system to have any police officer involved in such conduct."

Buffis was acquitted of 10 other charges related to allegations he mishandled and stole from the toy fund.

Buffis could have had a more lenient sentence, but Mastroianni said he gave him a tougher one because he displayed no remorse. Mastroianni said Buffis' refusal to admit he abused his office betrayed a "deep psychological issue."

Buffi's defense attorney, Lori Levinson, said she plans to appeal the sentence, which includes 2 years probation and a payment of $4,000 in restitution.

He will be allowed to turn himself in to begin his sentence within the next four weeks, the Eagle reports. Though he will no longer be able to vote because of his conviction, Buffis left the court room saying, “God bless America, vote for Donald Trump."