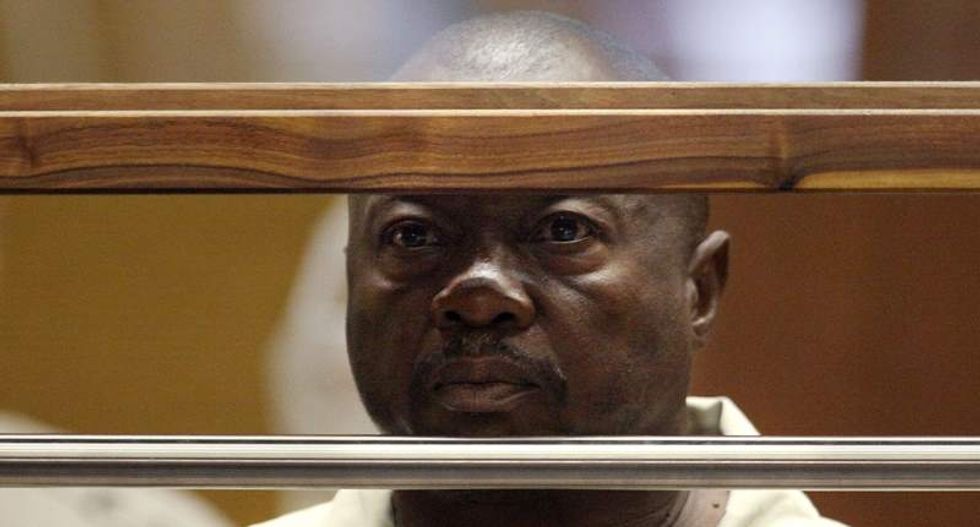 Lonnie David Franklin Jr. stands in court during his arraignment on 10 counts of murder and one count of attempted murder in Los Angeles Criminal Court on July 8, 2010. (ReutersS/Al Seib/Pool/File photo)

A former sanitation worker was convicted on Thursday of murdering nine women and a teenage girl as the "Grim Sleeper," a Los Angeles serial killer who preyed on prostitutes and drugs addicts in a crime spree dating back 30 years.

The Superior Court jury reached its verdict on all 10 counts of first-degree murder against Lonnie David Franklin Jr., 63, after deliberating a day and a half, capping a trial that ran more than 11 weeks.

Franklin, who could face the death penalty, also was convicted of attempted murder for an attack on an 11th victim, Enierta Washington, who survived being shot in the chest, raped, pushed out of a car and left for dead in 1988.

Washington took the witness stand during the trial to identify Franklin as the man who attacked her.

Judge Kathleen Kennedy instructed jurors to return to the courtroom on May 12 for the start of the trial's penalty phase.

Franklin was convicted of shooting seven women to death between August 1985 and September 1988, then strangling a 15-year-old girl and strangling or shooting two other women in a second round of killings between March 2002 and January 2007.

The gap of more than 13 years between the two spates of murders earned the killer the "Grim Sleeper" moniker. Since his March 2011 indictment, police said they had gathered evidence linking Franklin to at least six more slayings, some of which took place during the previously presumed lapse in killings.

Franklin, who did not testify in his own defense and sat impassively in court as the verdicts were read on Thursday, has been in custody since his arrest in July 2010.

During the trial, his attorneys sought to raise questions about DNA evidence presented by prosecutors and argued that the case against their client was largely circumstantial.

Los Angeles County Deputy District Attorney Beth Silverman told jurors that DNA collected from the victims' bodies showed that all 10 had sexual contact with Franklin just prior to their deaths. Prosecutors said they had been sexually assaulted.

Their nude or partially clothed bodies were found dumped in alleys and trash bins in South Los Angeles, an area gripped by rampant drug abuse, prostitution and other crime at the height of a crack cocaine epidemic that engulfed impoverished neighborhoods there during the 1980s.

In closing arguments, Silverman described Franklin, a former auto mechanic and city sanitation worker, as "a serial killer who was basically hiding in plain sight" as he stalked his victims.