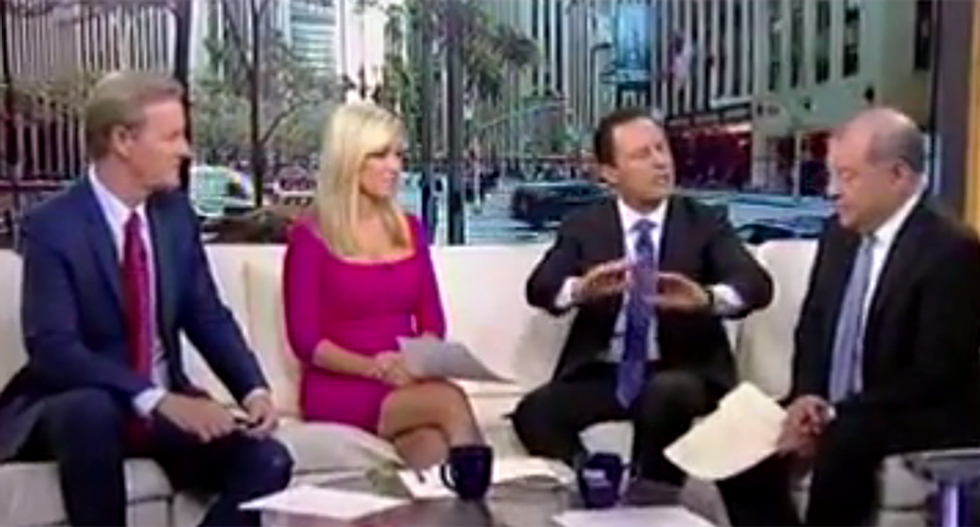 Fox and Friends on Clinton and the NRA (Photo: Screen capture)

The NRA spent the weekend trying to stoke the fears of its members at their leadership convention, but despite the freakout, "Fox and Friends" let it slip that Democratic presidential candidate Hillary Clinton "has never said she wants to abolish the Second Amendment."

The NRA has spent the last seven years trying to convince Americans that President Barack Obama is going to confiscate American's guns and that supporters of the 2nd Amendment should stock up to protect themselves. Now, they're spreading exactly the same myth and simply swapping the name Obama for Clinton.

Co-host Brian Kilmeade cited Karl Rove who said that the NRA's endorsement of Trump is a huge one to legitimize Trump to Republicans.

Steve Doocy cited Trump's speech to the convention when he said, "Hillary wants to abolish the Second Amendment through her Supreme Court nominees."

Kilmeade cut in after a dispute about whether police should be allowed to carry guns. "But she has never said she wants to abolish the Second Amendment," he said. "So that's — Donald Trump is going to a little extreme and I think she's going to the extreme, saying 'Donald Trump's America will have everyone shooting everybody.' So you play it as you want to play it. For the longest time, Democrats have been afraid to approach the NRA. Don't even bring up the gun situation. Now all of a sudden that's a major risk for her to take on guns."

Doocy admitted Clinton's approach is, "Oh, we're looking for common sense gun controls," a significant deviation from going door to door to take guns away. "There are already hundreds of laws on the books. The problem is, are those laws being enforced? And in many cases, they are not," he continued.

Co-host Ainsley Earhardt cut in saying that Americans agree with Clinton and they'd like to see gun control policy. "I was going to say, everyone, even NRA people, everyone who supports gun laws and Second Amendment, I believe they would all agree with you that they want to make sure that the right people are buying the guns."

Check out the full video below via Media Matters: