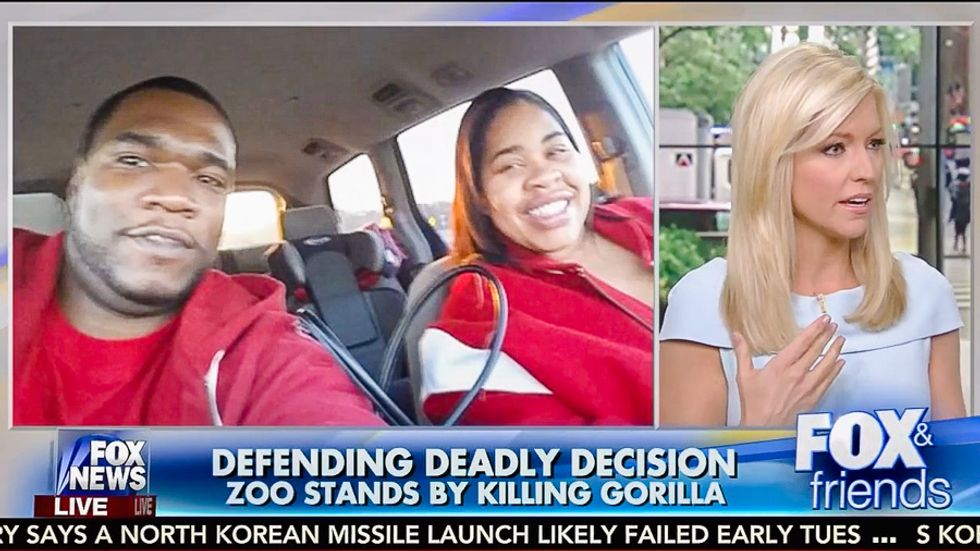 The hosts of Fox & Friends wondered if the parents of the boy who fell into a Gorilla enclosure at the Cincinnati Zoo over the weekend should be charged, pointing to the "lengthy criminal record" of the father who was not there at the time.

On at least four occasions, Tuesday's edition of Fox & Friends brought up a Daily Mail report that detailed the criminal history of Deonne Dickerson, the father of the 4-year-old boy who climbed into a Gorilla enclosure, eventually leading to the animal's death.

However, the show did not mention that the report found that Dickerson "appears to have turned his life around to become the proud father of four."

"The father has a long rap sheet, including drugs and kidnapping charges," Fox News host Abby Huntsman noted at the beginning of the program.

"Some say the parents need to be charged," co-host Ainsley Earhardt later told wildlife expert Grant Kemmerer, "bringing up the dad's past criminal history who wasn't even there at the zoo at the time."

And Brian Kilmeade began his interview with animal expert Jeff Corwin by posing a similar question.

"Some blame the parents of the child, calling them neglectful as reports surface the father has a lengthy criminal history," Kilmeade said. "Is someone to blame here or was this just a tragic accident?"

"It's a tragic event," Corwin advised. "And it's really hard for us Tuesday morning to kind of tell them what they should have done."