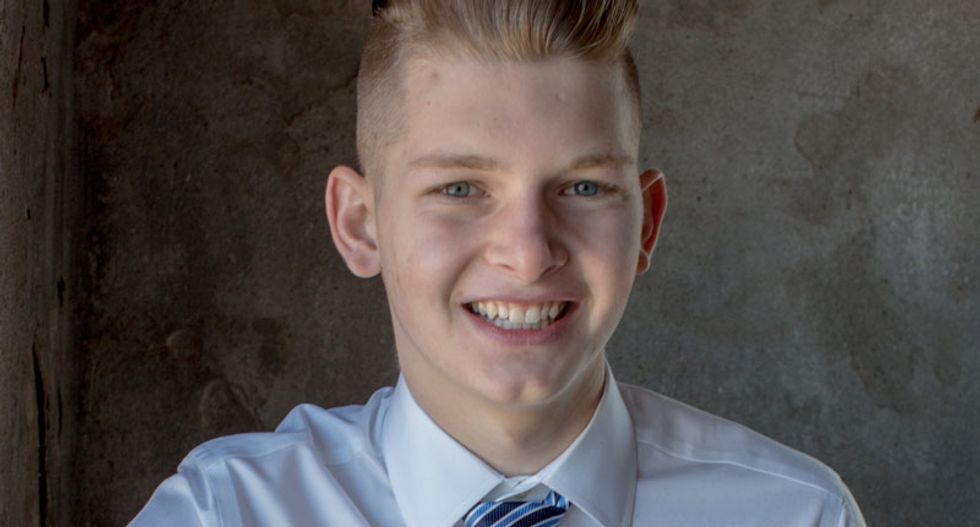 Liam Jameson was awarded a prestigious $40,000 scholarship to university. The problem? Dowling Catholic High School, a private Catholic high school in Iowa, has refused to allow Jameson to receive the award at the school's award presentation on May 5.

"The $40,000 scholarship to Iowa State University is awarded to Liam for his scholastic achievement and work reducing homophobia in his school and community as an openly gay student and co-founder of Dowling's Gay-Straight Alliance." The award is named in honor of Matthew Shepard, the Wyoming student who was beaten to death and left hanging on a fence during an anti-LGBT hate crime that horrified the nation.

But, rather than accept the school's refusal to acknowledge his achievement, Jameson has penned a poignant open letter to his school, and he attached it to a petition that would exert pressure on school officials to change their minds.

After attempting suicide more than once, Jameson made a promise:

"I vowed that no one should have to go through the experiences that I have, whether they are LGBT or not. So I decided that I would make an example of myself," he writes, in his letter. "I would be the person that I wished was there when I needed them the most ... having a safe environment for LGBT students where they don't feel the need to self-harm or commit suicide."

The letter continues with Jameson's detailing of the catalytic event at Dowling. Jameson and three other students to stage a walk out in protest that Tyler McCubbin had been denied a full-time teaching position, and was, in fact, fired for being openly gay. Jameson organized the protest against the firing. He then pushed the administration to create a safe space at the high school for LGBT students. His petition attracted 2,000 signatures.

"I wanted to leave Dowling a better place, one worthy enough to educate all the brave souls who have had lives far better and far worse than mine. A space for all. A space that valued the few just as much as it valued the many."

A Des Moines Register article  provides information about Dowling's refusal to allow Jameson's scholarship to be acknowledged alongside other students' awards.

"But the school's insistence on having a priest in the club led recently to an uncomfortable situation, Jameson said. The priest posted something on Twitter saying transgender people have psychological issues," the Register reported. Jameson had asked the principal to replace the priest, a request that has not yet been carried out.

The Eychaner Foundation hosts an annual dinner where its 2016 Matthew Shepard Scholarship Awards will be presented, this year on June 3. The Foundation is mystified by the school's refusal to allow Jameson the recognition at its own student awards ceremony. A previous winner of the award from Dowling was allowed. The rules have since been changed.

So far, Jameson's Change.org petition has received over 3,000 signatures, and over 1,500 messages of support. No word yet whether school officials intend to change their minds.