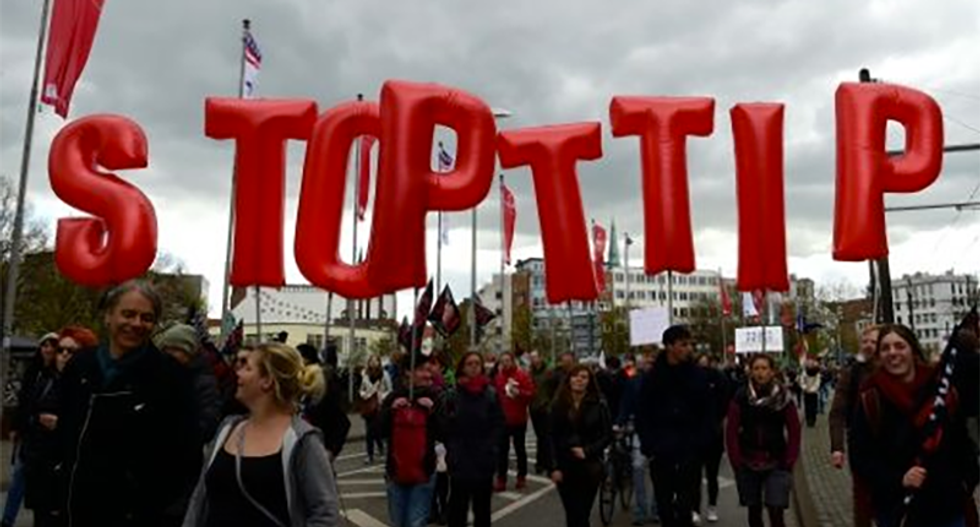 Greenpeace on Sunday said it was in possession of leaked documents showing that a planned huge free trade deal between the United States and the European Union poses "major risks for climate, environment and consumer safety".

The campaign group said it would on Monday publish 248 pages of classified documents to "shine a light" on negotiations for the Transatlantic Trade and Investment Partnership (TTIP), an ambitious treaty both sides want completed by year-end but which is facing mounting opposition.

The leaked pages will be published online at 0900 GMT, Greenpeace said in a statement.

It says the cache -- obtained by Greenpeace Netherlands -- represents two-thirds of the TTIP draft text as of the latest round of talks in April, and covers a range of issues from telecoms to food and agriculture and trade barriers.

"These leaked documents confirm what we have been saying for a long time: TTIP would put corporations at the centre of policy-making, to the detriment of environment and public health," said Greenpeace EU director Jorgo Riss.

The US and the EU have been trying to reach a deal on the world's largest trade agreement since 2013.

It is billed as a free-trade and investment deal for the 21st century, focused on harmonising regulations, lowering barriers on investment, opening access to government contracts and addressing new areas like data trade and consumer protections.

But it is facing rising resistance and protectionist sentiment, as critics question the benefits of more open trade.

In Europe in particular there is deep suspicion that TTIP will erode social and consumer protections to the advantage of big business.

Greenpeace says the confidential documents prove that long-standing environmental protections are being ignored and claims there is no mention at all in the proposed text of global goals to reduce greenhouse gas emissions.

The group also says the US wants the EU to drop its so-called "precautionary principle" under which products that may be harmful are banned.

Instead, the less strict US approach "that aims to manage hazardous substances rather than avoid them, finds its way into various chapters," according to Greenpeace.

"It is time to shine a light on these negotiations. Hard-won environmental progress is being bartered away behind closed doors," said Faiza Oulahsen, campaigner for Greenpeace Netherlands.

Following the latest TTIP negotiations last month, American and European negotiators said they had made progress but "substantial work" remained to agree a deal in 2016.

They said that while 97 percent of tariff issues had been covered, three percent -- the most challenging, including for farm products -- remained.

But on Sunday President Francois Hollande warned that France would reject the pact if it endangered the country's agricultural sector.