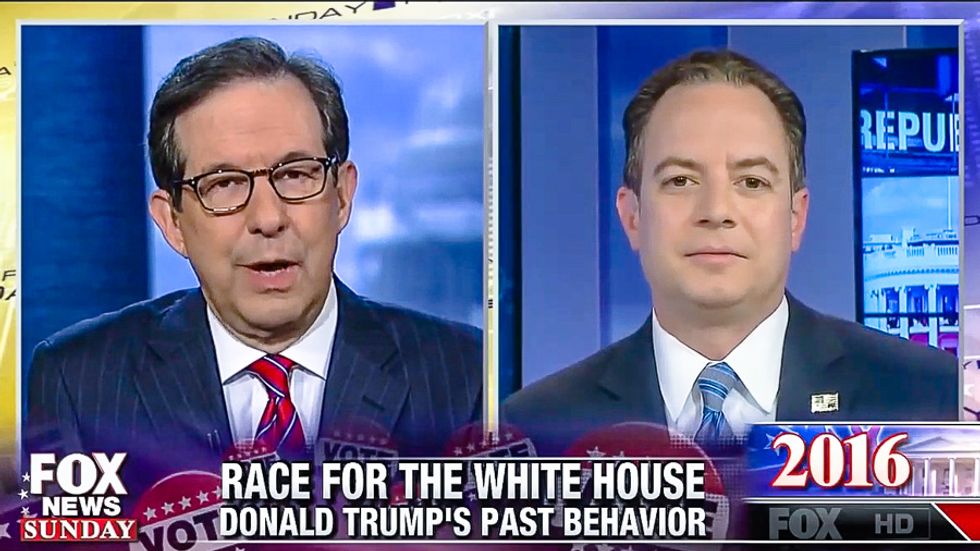 Republican National Committee Chairman Reince Priebus argued over the weekend that people did not care about Donald Trump's history of mistreating women because "nothing applies" to the billionaire.

During an interview on Sunday, Fox News host Chris Wallace asked the chairman if he was bothered by a New York Times report that found "repeated instances of Trump insulting women and making unwanted advances even in the workplace."

"Well, you know, a lot of things bother me," Priebus shrugged. "And obviously, I'm the wrong person to be asking that particular question."

"Wait a minute," Wallace interrupted. "Why are you the wrong person? You're the chairman of the party. This is your nominee, and they're saying he has mistreated women."

"People just don't care," Priebus replied. "I think people look at Donald Trump and Hillary Clinton and say, 'Who is going to bring an earthquake to Washington, D.C.?'"

"I don't think Donald Trump and his personal life is something that people are looking at and saying, 'Wow, I'm surprised that he's had girlfriends.' That's not what people look at."

"I don't understand why you say people don't care about that," Wallace pressed. "And are you going to look into the allegations?"

"I'm not saying people don't care about it," Priebus insisted. "I'm just saying that the reason he is where he's at is he represents something different than the traditional analysis of individual candidates. And yes, everything bothers me, Chris. But I don't know the truth of these things."

"All I'm saying is that after a year of different stories, nothing applies. That's all I'm saying."