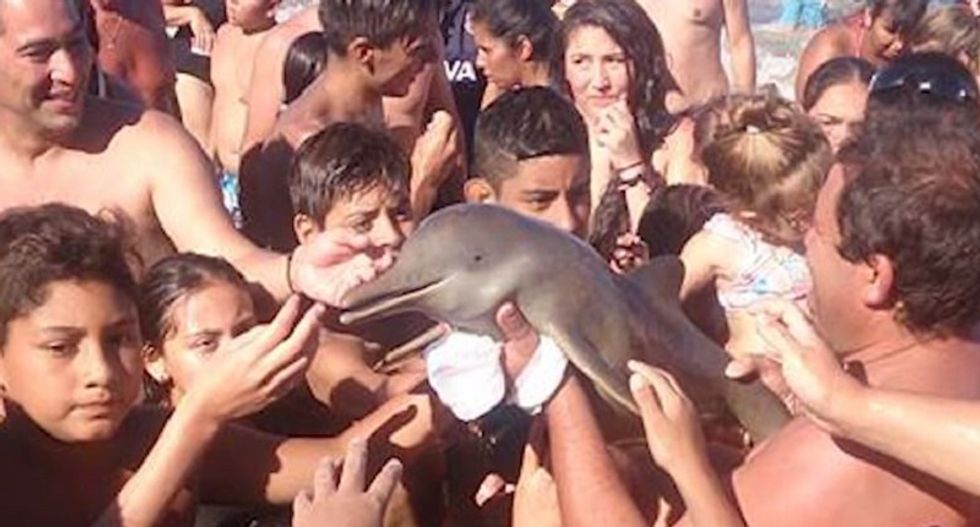 Baby dolphin dies after being handled by tourists (Screenshot/YouTube)

It's tourist season, which means humanity is probably about to wreak havoc on nature for the sake of a selfie.

If previous months have been any indicator, people can't seem to resist their urges to mess with wildlife or deface national monuments, if recent days at Yellowstone National Park in Wyoming can serve as an example.

1. This week, Alexey Lyakh, Ryker Gamble, Justis Cooper and Parker Heuser, all of whom are connected to Canadian clothing company High on Life, apologized for trouncing on the Yellowstone's pristine Grand Prismatic Spring, even though visitors are forbidden from doing so.

“We got over zealous in our enthusiasm for this wonderful place. When standing at the face of such natural wonder, we were drawn to it. In an attempt to get the perfect shot, we acted in a way that doesn’t reflect our respect for the environment we were trying to capture," the clothing company posted on Tuesday.

Rangers from the National Park Service are investigating the incident.

2. Another incident at Yellowstone resulted in tragedy for a bison calf, who had to be euthanized after tourists put it in their car, thinking it was cold. They also took selfies with the animal before putting it in the rented vehicle. As a result of being handled by humans, the calf was abandoned by its herd even after park rangers tried reintroducing it, and as a result had to be put down.

3. Three men are facing federal charges after a drunken, vomiting rampage in April that likely caused the death of an endangered fish, UPI reports. Steven Schwinkendorf, 29, Edgar Reyes, 35, and Trenton Sargent, 26, are accused of shooting through security apparatus to break into Death Valley National Park’s Devils Hole, where they stomped around, left beer cans and boxer shorts and vomited.

Authorities believe the men caused the death of an extremely rare and endangered pupfish.

4. Then there was the horrific incident in Argentina earlier this year, where a man grabbed a dolphin from the water and carried it around while other tourists poked and prodded at it. The dolphin, a baby, appeared to have overheated while being passed around by tourists trying to take selfies with it, and died. The Franciscana dolphin is found off coasts in South America and considered a vulnerable species.

5. Also in February, actress Vanessa Hudgens found herself in hot water for carving a message on a rock in the Coconino National Forest, near Sedona, Arizona. The actress is accused of scrawling a heart with her and her boyfriend's first names in it, posting the image to social media and captioning it with "Happy Valentine's Day boo boo bears."

6. Activists for the environmental group Greenpeace are under investigation for walking onto restricted land and damaging the world-renowned Nazca lines to lay down letters spelling out, "Time for Change! The Future is Renewable!"

“They are absolutely fragile. They are black rocks on a white background. You walk there and the footprint is going to last hundreds or thousands of years,” Luis Jaime Castillo, the deputy culture minister for Peru, told the Guardian. “And the line that they have destroyed is the most visible and most recognised of all.”

Far-right conspiracy theorist Rep. Majorie Taylor Greene (R-GA) and Rep. Lauren Boebert (R-CO) are not outliers in the Republican Party, but are just the latest examples of the "white lady agitators" who have always propped up white supremacy.