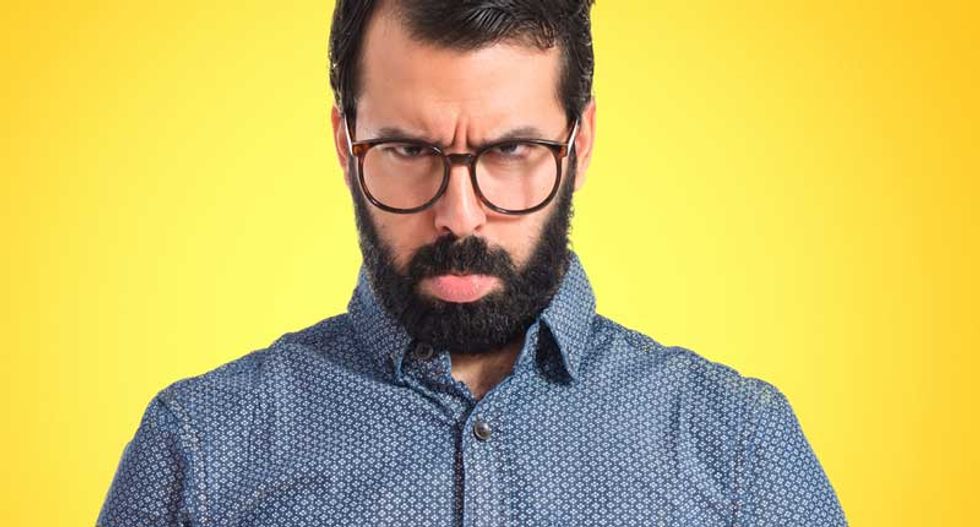 In the past several days, the news media have been reporting from airports such as O’Hare or LAX where the lines to go through security are longer than the waiting list for Hamilton. Many of the folks standing in those lines have reported missing flights, which then creates flights that are overcrowded with the folks from the earlier connections that didn't get made.

Watching people standing in line should remind the public about those budget standoffs that an obstructionist Republican Congress mounted against President Obama last fall. Instead,  the media clutches its pearls while loving the videos shot by fed-up travelers, and former U.S. Senator Bob Kerry suggests, with a straight face, that the government consult Disney about how to process such a large number of people at one time. Of course, Disney is a private corporation with seemingly endless funds, while the TSA is operating on the let-the-hostages-live budget that Congress called a "compromise."

Welcome to the America where the impact of young people's increasing political identification as "social liberal but fiscal conservative" (SLFC) is being played out in airports, job sites, universities, and emergency rooms across the country.

For every viewer whose streaming gets interrupted for buffering just when the good part is happening, for every enthusiastic AirBnB patron who can't find cheap housing in the town where they work, for every worker whose boss provides "perks" like chair massages or an indoor basketball court but doesn't pay a salary that matches the cost of living, fiscal conservatism is more than an abstract principle. Fiscal conservatism hobbles the very social progress that the SLFC supports.

The white, butthurt feelings that drove the 2010 mid-terms put hardcore Tea Party Republicans in power, and very few of the SLFC young people who voted for Obama turned out to vote. The Tea Party's only purpose is to say “no” to President Obama. When the Tea Party Congress isn't busy trying to repeal the Affordable Healthcare Act or pass laws to criminalize abortion, it's finding new ways to resist agreeing with the president on anything. One of the best ways that Congress has found to prevent the government from enforcing any of its responsibilities is to plug up the financial pipeline. That TSA line? A victim of the budget power play where Tea Party activists decided it would be better to threaten to default on the national debt rather than see any increase in the national budget.

Fiscally conservative means that we can't have nice things, like the kinds of Internet speeds enjoyed by most of the countries in Europe and much of Asia.  Swedes pay approximately $40 per month for the Internet. While the tech bros of San Francisco and environs may be creating cutting edge technology, it's the equivalent of trying to drive a Maserati in a school zone. In nations such as Sweden, the internet is treated as a public utility, and there was public investment in building the infrastructure of the service so that it was available to everyone in the country. While many in the U.S. equate infrastructure with road construction, it's important to remember that the Flint water crisis is a direct result of not wanting to pay for infrastructure improvements. Because we're all subject to the competitive market of internet providers who have no motivation for extending service to sparsely populated areas, or investing in increased speeds if it requires huge capital investments, it's unlikely that those speeds are going to catch up with countries where "big government" made the investment on behalf of their peoples.

Many of those tech bros who are celebrated for their creativity are vulture capitalists in hipster clothing. While the perks of working in those hip spaces that offer employees chair massage, or Uber rides home at night, or who bring in food when employees are asked to work late, are also spaces where company employees are on part-time hours and don't qualify to have their health insurance paid for. Working conditions are not monitored because Occupational Safety and Health (OSHA)--the government department responsible for making sure employees are safe at their jobs--has been gutted by budget cuts. Tech entrepreneurs who exploit the intellectual labor of their employees--even requiring them to sign non-compete agreements so they can't work for a higher salary at a competitor--face few penalties for moving the company overseas to take advantage of lower labor costs.

SLFC workers who are paying as much in student loan payments each month as they do for rent also suffer from the "fiscal conservative" meme. Students who went to college prior to the early 1980s paid low tuition. In the fall of 1980, for example, my tuition at a state school was $206 per quarter, and comparable rates applied across state boundaries.  Big government investment in a "Great Society" where anyone who was smart enough to go to school could enroll and not accrue enormous debt. There were ways to have those loans cancelled if a student agreed to go into teaching for a period of time, or to practice their profession in underserved areas. The government also paid for job training for those who did not go to college, and it was possible to take a job right out of high school, with adequate training, where a person could support a family on the hourly wage. The "fiscal conservative" push by politicians such as Ronald Reagan undercut the funding for public education. Public universities had to rely more on tuition to meet overhead costs at the same time that there were far fewer dollars to distribute among those with financial aid needs.

Even the hip capitalism of AirBnB is not without its social costs. It's not clear whether AirBnB landlords are required to comply with federal laws regarding discrimination; African Americans are reporting--and documenting--repeated instances of being denied a booking when their race became evident to the landlord. AirBnB is certainly economical compared to the cost of staying in a hotel with local and national hotel taxes. Of course, the decrease in tax revenues means that something will have to get cut to make up for the budget shortfall, but even if tax payments are not an immediate area of concern, consider that many of the young adults living in  “hot” areas for AirBnB properties are also the communities where the rental market is tight. Whether it's an exciting urban area like San Francisco, or a cool small town that's close to awesome scenery--like Bend, Oregon or Boulder, Colorado--landlords, taking advantage of the regulation-free advantages of AirBnB,  have decided that they can make more money renting out their properties for short periods of time to tourists looking to save a few bucks, rather than letting a group of students or young workers share a space, or renting out guest rooms in their big houses. Those workers who are making low wages are also getting squeezed out of the rental properties close to their places of employment.

The old adage says that "you get what you pay for." Fiscal conservatism, which is often just another way of saying that someone doesn't want to have to pay taxes, ends up having real-life impacts on Americans' quality of life. The idea of small government may look attractive in a hipster world where everyone just wants to do their own thing, but it's hard to do one's own thing when one is working long, underpaid hours in order to service back-breaking student loans and pay for ticky-tacky housing with rents that resemble a king's ransom. The people who benefit most from fiscal conservatism are the people for whom student loans, or access to housing--even having to rely on commercial airlines for travel--are not issues. For the rest of us, fiscal conservatism is a bad investment.