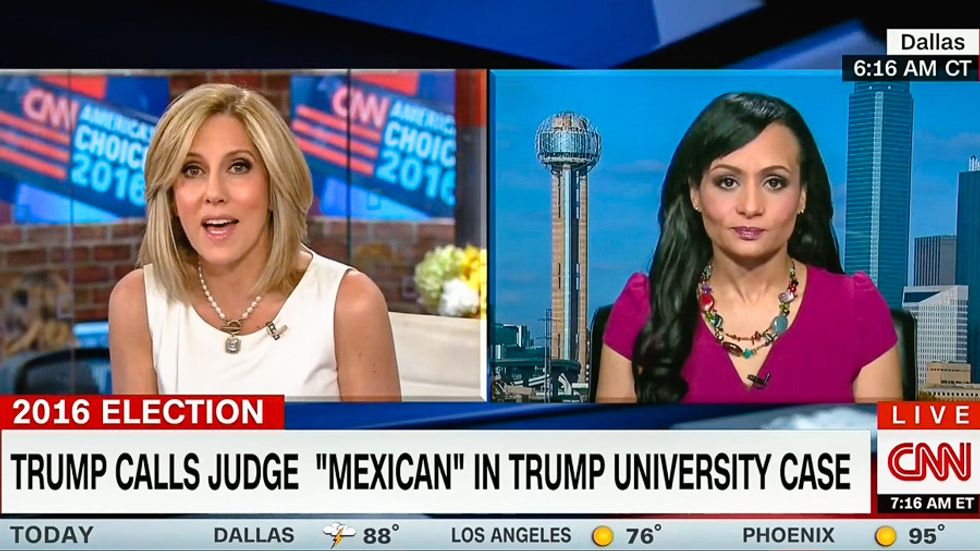 Trump campaign spokesperson Katrina Pierson insisted on Monday that she and her boss continue to "believe" that a federal judge in the Trump University case is Mexican even though he is a U.S. citizen.

At a rally last week in California, Trump attacked Judge Gonzalo Curiel for hearing a class-action lawsuit against Trump University, which former students have called a scam.

"I think Judge Curiel should be ashamed of himself. I think it’s a disgrace that he’s doing this," Trump said. “The judge, who happens to be, we believe, Mexican…I think the Mexicans are going to end up loving Donald Trump.”

On Monday, CNN host Alisyn Camerota called out Pierson for attacks on the judge's ethnicity.

"Katrina, 'We believe he's Mexican,' what is that?" Camerota asked.

Pierson argued that suing Trump University was "like saying if you graduate from Harvard and you don't have the same outcome in your profession as everyone else, you should sue Harvard. And that's just simply absurd."

"All sorts of things were over promised," the CNN host interrupted, "that Donald Trump was going to playing a more active role than he was, that there was more of a rate of job success than really was true."

Pierson replied: "I think what is really interesting about this particular judge -- as Mr. Trump refers to him as a Trump hater -- is he even mentions on his judicial questionnaire that he was a La Raza lawyers association member. This is an organization that has been out there organizing these anti-Trump protesters with the Mexican flags, they are pushing it, these signs have been very apparent."

"And so, Mr. Trump is just stating the obvious," she added.

"But this judge isn't Mexican," Camerota shot back. "He was born here. He's American."

"He says we 'believe'," Pierson insisted.

"But what's the point of that? Why is he going after an ethnicity?" Camerota wondered.

Pierson again blamed the "anti-Trump protests with their Mexican flags and La Raza."

"And this judge is connected to that," she said.

"Okay, but you recognize -- you're saying Mr. Trump was wrong," Camerota observed.

"Okay, for the record, he's American," the CNN host said, concluding the interview.