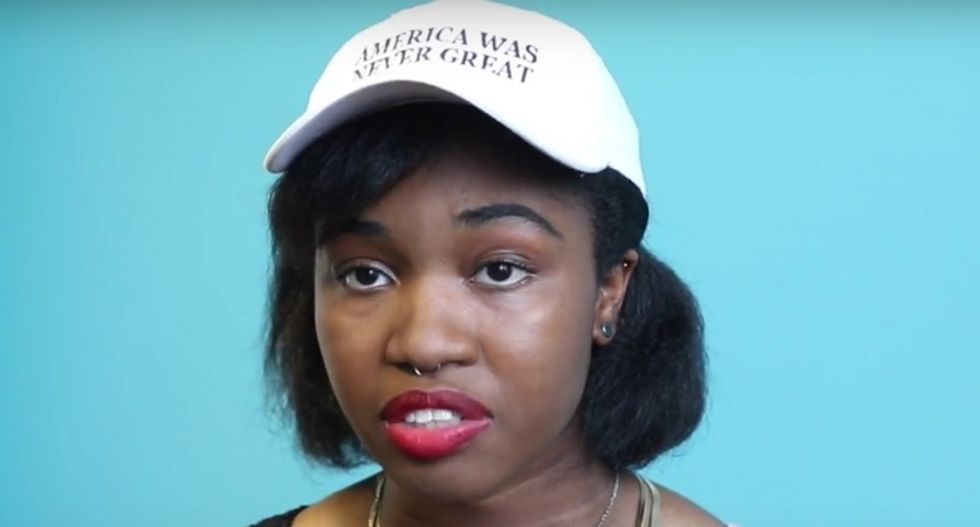 A Home Depot worker in Staten Island, New York, has has been on the receiving end of death threats and racial slurs after donning a hat she had custom made that pointedly criticizes Donald Trump's campaign slogan, "Make America great again," SILive.com reports.

Krystal Lake, 22, was spotted wearing the hat, which reads, "America was never great," during her Sunday shift. The phrase reflects criticism levied at Trump that "making America great again" only applies to people who didn't bear the brunt of historical oppression.

"I feel it offended a lot of people because a lot of Trump supporters live in Staten Island," Lake told SILive. "Trump is very rash and in your face, but when someone else has a message against him, his supporters can't take the criticisms."

She says she's been receiving death threats on her social media accounts.

"People have been saying really racist things to me and that they're going to come and find me, and that what I said is disgraceful and I hate America -- but I don't hate America," she told SILive. "I know there are a lot of opportunities here. I just wish we would worry about making America better -- not 'great again.'"

When asked by SILive, Home Depot spokesman Stephan Holmes said employees aren't allowed to wear political statements on their clothes while at work.

"We appreciate and understand the concerns of our loyal customers," he told SILive. "In terms of the message, our associates are not permitted to wear items that reflect political statements. Unfortunately, no one on our management team saw her wearing the hat -- otherwise, they would have had her remove it immediately."

But Lake says some of her co-workers wear pro-Trump pins on their uniforms, "But no one ever says anything to them."

She said Trump doesn't value people who don't look and think like him.

Watch Lake talk about her hat, as posted by SILive, here: