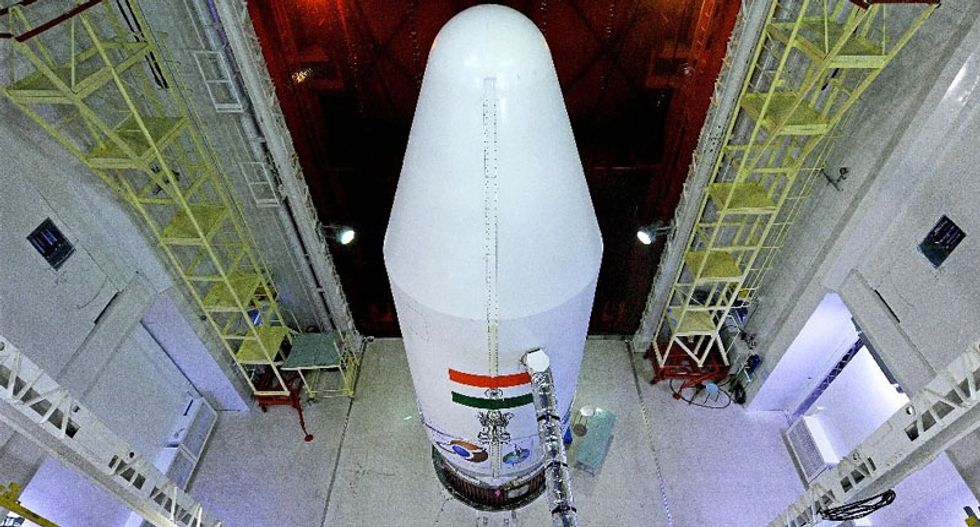 ISRO made global headlines in 2013 after it successfully launched an unmanned mission to orbit Mars, spending just $73 million (AFP Photo/)

The shuttle was reportedly developed on a budget of just one billion rupees ($14 million), a fraction of the billions of dollars spent by other nations' space programmes.

The Reusable Launch Vehicle, or RLV-TD, which is around the size of a minibus, hurtled into a blue sky over southeast India after its 7:00am (0130 GMT) lift off.

After reaching an altitude of about 70 kilometres (43 miles), it glided back down to Earth, splashing into the Bay of Bengal 10 minutes later.

The test mission was a small but crucial step towards eventually developing a full-size, reusable version of the shuttle to make space travel easier and cheaper in the future.

The worldwide race for reuseable rockets intensified after NASA retired its space shuttle programme in 2011.

They are seen as key to cutting costs and waste in the space industry, which currently loses millions of dollars in jettisoned machinery after each launch.

Musk told reporters in April that it currently costs about $300,000 to fuel a rocket and about $60 million to build one.

But ISRO hopes to develop its own version, primarily to cash in on the huge and lucrative demand from other countries to send up their satellites.

The Indian space agency is no stranger to stellar achievements on a shoestring budget.

It made global headlines in 2013 after sending an unmanned rocket to orbit Mars at a cost of just $73 million. NASA's Maven Mars mission had a $671 million price tag.

The launch and its low cost were a source of immense pride in India, which beat rival China in becoming the first Asian country to reach the Red Planet.

K. Sivan, a scientist involved in the latest project, said the seven-metre (23-foot) long shuttle survived the test flight, and scientists hope subsequent models six times as big, to be built over the next decade, will glide safely back to land.

"We have located the place where the vehicle is floating. The landing was soft and the vehicle did not break," Sivan told AFP.

"The mission went off as planned and data from the experiment showed that we have achieved its objectives and demonstrated the RLV technology."

"Dynamism & dedication with which our scientists & @isro have worked over the years is exceptional and very inspiring," Modi said on Twitter.

Modi has often hailed India's budget space technology, quipping in 2014 that a local rocket that launched four foreign satellites into orbit had cost less to make than Hollywood film "Gravity".