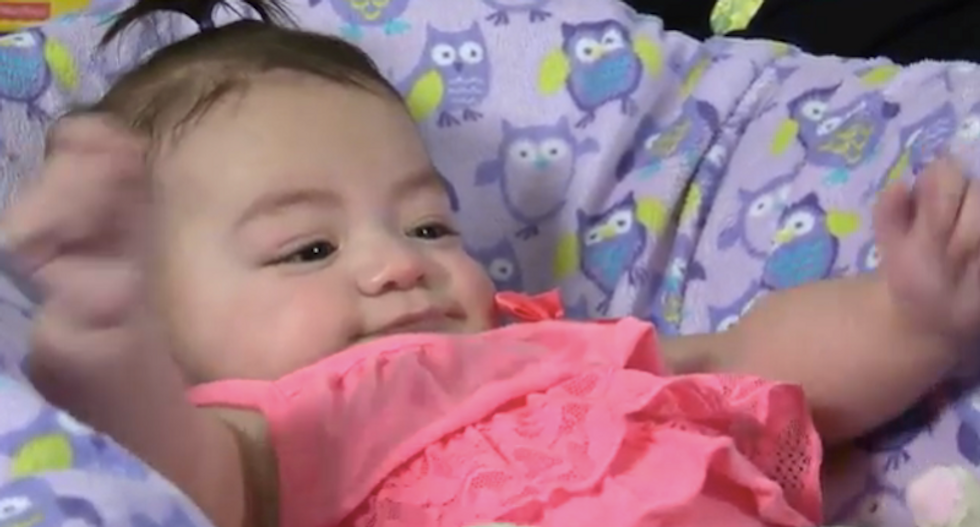 An infant is back home after traveling with her family to Colorado, where she became the youngest patient to be treated with a controversial cannabis oil.

Amylea Nunez suffered from frequent and debilitating seizures that sometimes prevented her from waking up for a full day, and she was diagnosed shortly after her December birth with a rare form of epilepsy, reported KRQE-TV.

“There’s times were she would only wake up every other day,” said her father, Ernie Nunez. “Just sitting there while she’s having a seizure, it’s horrible and there’s nothing you can do. The worst one was an hour long."

Amylea was flown from New Mexico to a hospital in Aurora, Colorado, where the baby's parents begged doctors to prescribe cannabis oil.

Doctors were reluctant to give the drug to such a young patient, but they eventually agreed -- although physicians wouldn't administer cannabis oil themselves.

Amylea began cannabis oil at two months old, and she lifted her head for the first time three months later.

“It was kind of like I could tell the doctors, ‘Look what she’s capable of,’ compared to them saying she’s never going to be able to hold up her head,” said her mother, Nicole Nunez.

She came back home to Albuquerque last week, at six months old, and her family said the baby still requires special care.

“We still have to get her back to eating by mouth because the seizures did so much to her ability to be able to actually take a bottle like a normal baby,” said Ernie Nunez.

The family is applying for a medical marijuana card in New Mexico, and they hope to change state laws to help other children suffering from seizures.

Amylea is still taking a hemp oil called Haleigh's Hope, and she and her family must still return to Colorado for checkups.

Her parents encouraged others to consider cannabis oil to treat some childhood illnesses.