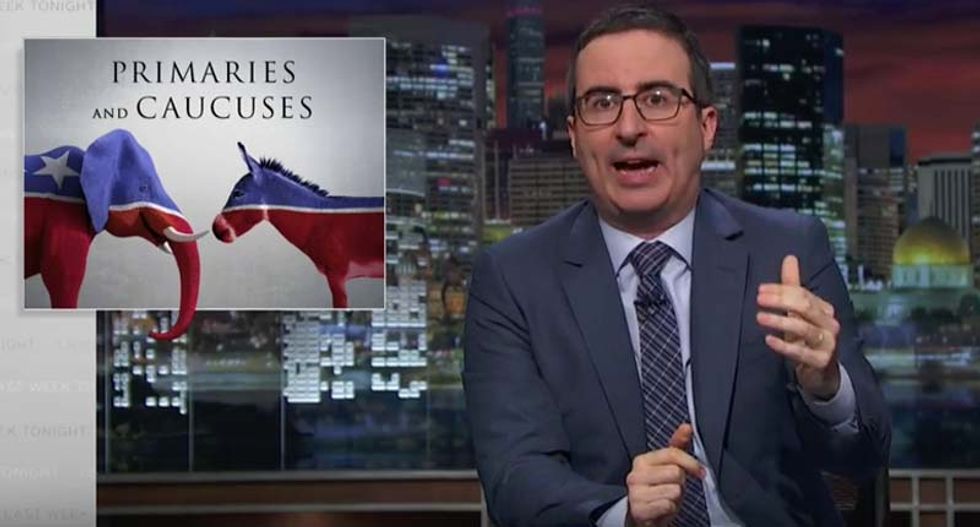 Last Week Tonight host John Oliver took a big swing at both political parties Sunday night, ripping into their arcane and arbitrary primary rules -- which can vary from state to state -- only to reach final delegate counts that ultimately may not reflect the will of the voters.

Or, as he correctly labeled the whole process, it's an "erratic clusterfuck every four years" where “almost every part of this process is difficult to defend.”

Describing this year's primaries as the "electoral foreplay that we've been partaking in since February," Oliver went on to make the larger point that primaries and caucuses give voters the sense that they are selecting the party's candidate when that may not be the case.

The HBO host used the raucous Nevada Democratic Convention last week as a jumping off point to illustrate a confusing and needlessly complicated caucus process used to select just 12 of the state’s delegates.

“They had a caucus in February which Hillary Clinton won, but that caucus only determined 23 out of their 35 regular delegates. As for the remaining 12, those were decided by delegates at the state convention, who were chosen by the delegates at county conventions in April, who were chosen in those February caucuses, which, you may remember, Hillary won," Oliver explained.

"Unfortunately for her, at those county conventions more Bernie supporters showed up and they had an advantage going into the state conventions, although by that time Hillary supporters had realized what was happening and managed to mobilize their turnout, making the numbers in that room basically even," he continued. "At this point both sides began fighting to disqualify each other's delegates over technicalities such as failing to register as Democrats by May 1 -- a deadline set after it had already passed at the convention by the credential’s committee.”

Addressing the state parties, Oliver was more blunt: "They’re basically private clubs. They can set their own rules."

Oliver then asked viewers to join him in writing party leaders to clean up their primary act, using Groundhog Day as a letter-writing day and stating that it seemed appropriate, because otherwise, "we will be destined to live through the same nightmare scenario over and over again until the end of f*cking time."