John Oliver: If you think the Donald is bad, wait until you meet the Trump of the Philippines 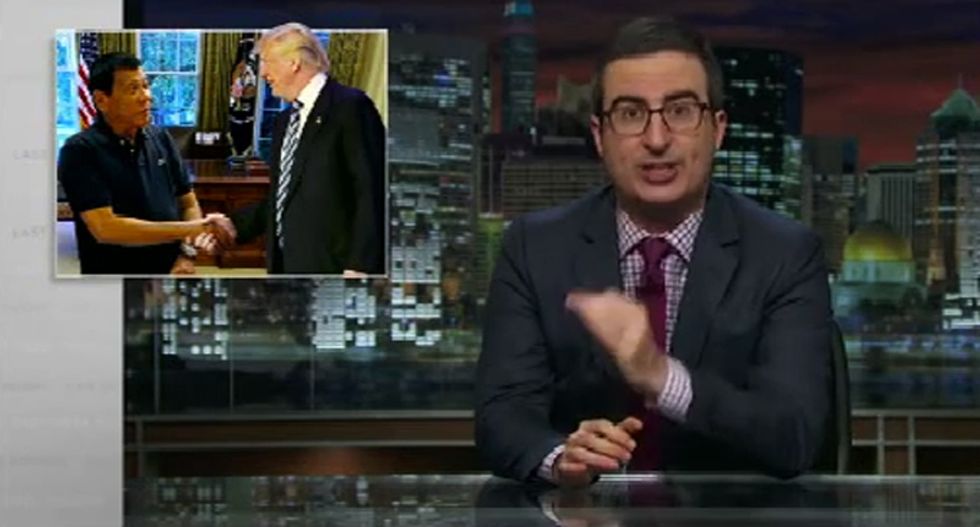 While the U.S. is reeling at the thought that the Republican Party is about to make a misogynistic sociopath their standard bearer in the 2016 presidential election, Last Week Tonight host John Oliver kicked off Sunday night's episode informing Americans that the Philippines has its own Donald Trump -- and he's infinitely worse.

Meet Rodrigo Duterte, the current mayor of Davao City and the front runner to become the next president of the Philippines in Monday's election.

“Duterte routinely kisses his female supporters and once called the pope a ‘son of a bitch,’ all of which has earned him the reputation as the ‘Trump of the East’—a title previously held by a burnt wonton covered in scarecrow pubes,” Oliver explained.

“Duterte has also suggested that, if elected, he would kill five criminals every week. This may not be an idle promise as, since he’s been there, extrajudicial death squads have reportedly killed over a thousand people," the host continued. "And while he denies any involvement, he does admit he has blood on his hands.”

After showing a clip of Duterte admitting that he had killed "about three people" in the past few months, an outraged Oliver ripped into the potential leader of a country closely allied with the U.S.

“I’m sorry… 'about three people?"  That is not good!” the host bluntly stated. “Not knowing how many people you’ve killed is like not knowing how many Vicodin you took. If you don’t know the exact number, the answer is: way too f*cking many.”

Showing a clip of Duterte stating he was not joking when he stated that he wished he had been part of the 1989 gang rape and murder of Australian missionary Jacqueline Hamill in his hometown, Oliver cut to the chase.

“What a f*cking asshole. And if any part of you is thinking, ‘Was that some kind of horrific joke?’ please know he meant every word of it,” Oliver exclaimed. "Let this be a lesson to all of us. When we say 'I just want a politician who will tell me what he really thinks,' we should specify that that politician should not be a total f*cking monster.”

The host then showed a photoshopped picture of Duterte shaking hands with possible presidential counterpart Donald Trump in the future to hammer home the horror of it all.